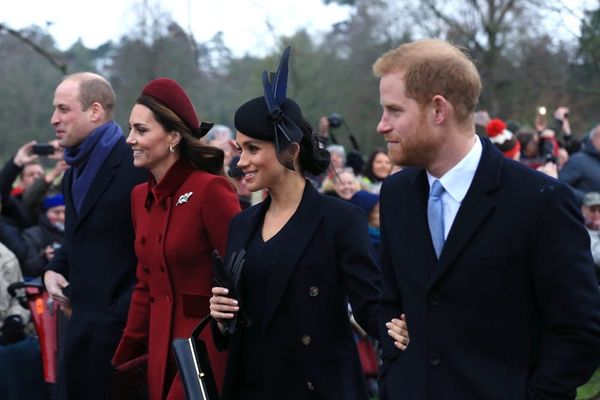 Prince Harry and Duchess Meghan Markle had a very merry Christmas morning — their first as husband and wife. Per tradition, the newlyweds joined Queen Elizabeth II and other members of the British royal family at the queen’s estate in Sandringham, where they attended St. Mary Magdalene Church and mingled with well-wishers.

Duchess Meghan, walking arm-in-arm with Prince Harry, was all smiles as she chatted with Duchess Kate after the service. She wore a navy dress and a navy Victoria Beckham coat with a matching fascinator, while Catherine opted for a scarlet coat with matching gloves and a hat.

Prince William and Duchess Kate’s three children, Prince George, Princess Charlotte, and Prince Louis, did not attend church with the family, but Kate reportedly told one well-wisher that the little ones had woken her up very early.

Leaving the church, Duchess Kate, Duchess Meghan, Prince William, and Prince Harry followed Prince Charles down a path lined with hundreds of members of the public, who shouted out holiday greetings as the royals passed. Charles attended without his wife, Duchess Camilla, who was home with a cold. Queen Elizabeth II’s husband, Prince Philip, also sat out the festivities.

Even with those absences, though, the royals had a full house. Peter Phillips, the son of Anne, Princess Royal, attended with wife Autumn and daughters Savannah and Isla; Princess Eugenie brought husband Jack Brooksbank; and Princess Anne was accompanied by Vice Admiral Sir Tim Laurence. Other royal guests included Zara and Mike Tindall and the Earl and Countess of Wessex with their children, Lady Louise Windsor and James, Viscount Severn.

Next year, there will be at least one more guest at Sandringham: Duchess Meghan and Prince Harry are expecting their first child in the spring of 2019.

This was actually the Duchess of Sussex’s second Christmas with the royals. Although significant others traditionally attend only after they’ve officially married into the family, Queen Elizabeth II made an exception for Markle in 2017.

“She really enjoyed it,” Harry said on BBC Radio 4 last year. “The family loved having her there. There’s always that family part of Christmas, there’s always that work element as well. And I think together we had an amazing time.”