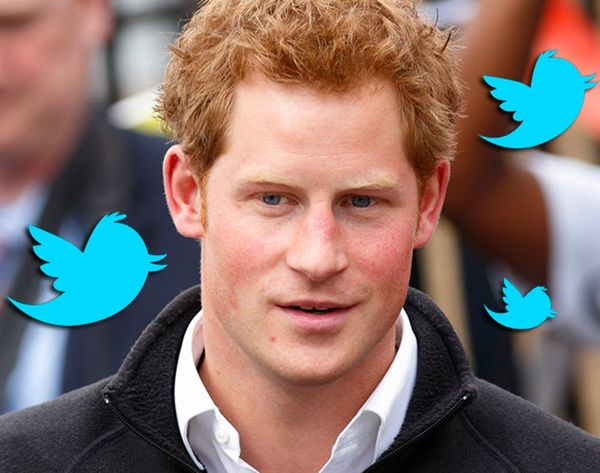 Don’t expect to see selfies with Grandma, The Queen or Prince George’s first steps on a six-second Vine anytime soon, but Prince Harry has (finally!) sent his first Tweet. Was it a sad song lyric alluding to his recent single status? A link to a new Tumblr featuring artsy photos from his travels? A funny review of the recent Game of Thrones ep?

No, it was actually an earnest Tweet encouraging support for the Invictus Games, a sporting competition for injured veterans. And, if we’re being technical, he sent it from their official account @InvictusGames. But he signed it! And really sent it!! And for a good cause — oh, that Harry #swoon.

Hope everyone will get behind #invictusgames. Great opportunity to support and thank the men and women who have given so much. Harry
— Invictus Games 2014 (@InvictusLondon) May 15, 2014

Less than 1,000 Retweets? Come on, bro, you gotta step up that social media game! For as hip ‘n’ cool as the young Princes have made the British Monarchy seem since Will’s internationally celebrated birth, the brothers royal are quiet on the tech front. This marks the first Tweet from either, not counting joke account @DukeCambridgeUK and the *rather dull* (you read that with a British accent, right?) official @ClarenceHouse that keeps anglophiles abreast of William and Harry’s comings and goings.

Maybe seeing the attention paid to this Tweet + the awareness instantly spread by a 140-character shoutout for a cause the Prince cares about will get him on the web for good. Since we’ve known the ginger Prince to get in trouble a time or two with his private shenanigans, maybe it is best he keeps the Twitter app off of his phone. Though we swear we will keep it our little secret if we ever see him on any other social app — we hear Tinder is a great place to meet a princess these days…

Lisa Raphael
In her past professional lives, Lisa has served the masses as the Editorial Director at Brit + Co, Bieber Whisperer at J-14, Golden Girls Fan Club Prez at Lifetime and Talk Show Host Understudy to Katie Couric. Now, she's taking on the sports world at The Relish, teaching Hairography 101 in her spare time and will forever be trying to fill the hole Zayn Malik left in her heart.
social media
Tech
social media twitter