ProtectHer Is Increasing Respect for Women, One Locker Room at a Time 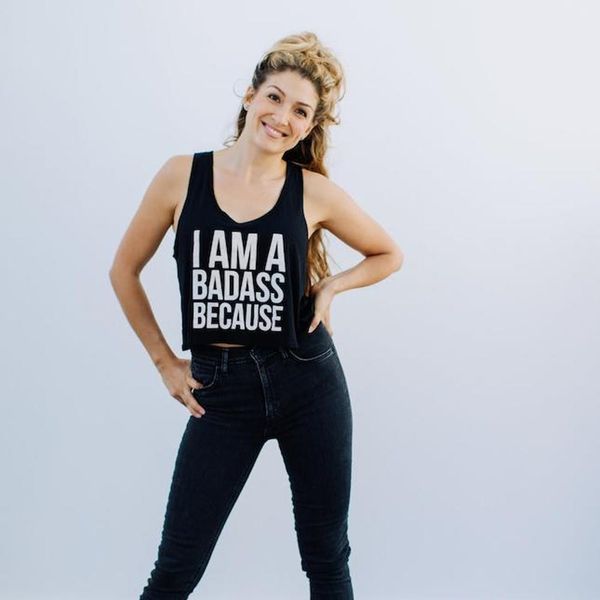 You’re a do-gooder who continually thinks about ways to make the world a better place. Perhaps you’re the one in your office who’s always collecting for food drives or running 5Ks on behalf of rescue groups. You love buying from socially conscious companies and reading about #girlbosses who start businesses that give back. If this describes you, why not channel your inner superpowers to turn that passion into a dream job? In this week’s How to Quit Your Day Job, we chat with activist Alexis Jones, founder of ProtectHer — a program that addresses domestic violence and sexual assault on college campuses. Read on to discover how Jones developed her inspiring career!

After Jones earned her graduate degree from the University of Southern California, she founded the empowerment nonprofit I Am That Girl, which currently has more than one million girls involved in its programs. Through her nonprofit work, she started speaking engagements and became a media personality who’s worked at ESPN and Fox Sports. Jones decided to launch ProtectHer after being invited to give a talk on a show called Elite 11 to the top 18 quarterbacks in the country about the importance of respecting women. After the show aired, she was hired to talk to more male athletes. Now, ProtectHer is a for-profit social enterprise that’s earning rave reviews from college athletes and changing the way sexual assault is discussed on campuses.

1. Talk to pros. Jones officially launched I Am That Girl right out of grad school, which she calls a “learn-as-you-go experience.” Before starting ProtectHer, she had conversations with more experienced mentors to learn from them and gain valuable insight before starting her new endeavor. “With ProtectHer, I had a much more sophisticated team and a more experienced, larger network that helped guide me to put together a better game plan for growing this social enterprise,” explains Jones.

2. Be honest. The ProtectHer program targets male college athletes to have honest conversations about sexual assault on college campuses and respecting women. Jones saw a need for this frank discussion and provided a solution. In her talks, she focuses on being “honest & candid and not sugarcoating anything.” For her, authenticity and making sure her discussions aren’t “buttoned-up” and boring is the best way to relate to and communicate with her audience. “Hundreds of top-tier college athletes I’ve spoken to have expressed bravery, vulnerability, fears, doubts, and confusions, and they would tell me what they were missing from typical sexual assault prevention education,” Jones reveals.

3. Take inspiration from feedback. Starting a socially focused company means that you’re going to have challenging days — because you’re dealing with challenging issues. Listening to feedback from participants can help fuel the fire in you to keep going. “The feedback I’ve gotten most, and that I live for, is, ‘I want to be a better dude.'” Post-discussion, Jones has talked to athletes who share stories with her about a little sister with an eating disorder or a girlfriend who may have been sexually assaulted in the past. When she has these types of conversations, she knows that her programming is working.

4. Gather your dream team. Thanks to her earlier nonprofit work, Jones already had access to some of the best talent in activism and sports spaces to help her start up ProtectHer. She rallied a team of coaches, activists, experts, and award-winning filmmakers and curriculum writers to help her develop her ideal company. “When you bring together the right dream team to solve a problem,” Jones shares, “the world will never again be the same.”

5. Listen to your tribe. Even though Jones is hugely accomplished, she faces self-doubt like anyone else. “It’s hard as hell to have a vision and bring it to fruition,” admits Jones. “Without a support system and powerful tribe to remind you that you’re capable of doing extraordinary things, it’s easy to listen to the lies that exist within yourself.” To combat her fear and self-doubt, she relies on the knowledge that her friends and family will make sure she doesn’t give up.

6. Keep going. You’re definitely going to have tough days. Jones shares that making a contribution to the world means needing people in your corner who you can rely on to remind you of what you’re capable of and keep you forging ahead. She compares her work to endurance sports. “It’s not one marathon. It’s 265 marathons back to back,” Jones observes. “It’s hard, and this journey is not meant to be done alone.”

7. Ask for help. In the early days of Jones’s career, she thought that asking for help made her look weak and incapable, so she didn’t reach out. Now, she realizes that people who have accomplished the most are shameless about asking for assistance. “You have to have courage and humility to ask for help when you need it the most,” Jones reminds us.

1. Master Your People Skills ($199): Part of starting a social enterprise means talking to all different types of people. If you struggle with being an introvert or just want to polish your people skills, take this online course with behavioral investigator Vanessa Van Edwards, who will teach you through lessons, activities, and challenges how to make meeting new people a breeze.

2. Become a Better and Funnier Speaker ($79): If public speaking will be part of your socially conscious company, you’ll want to brush up on your communication skills. Bestselling author David Nihill will teach you how to manage stage fright, make your speeches funnier, and replicate successful elements of the best TED Talks.

3. A Brand Called You ($99): If you struggle to talk about yourself or articulate your vision, this online series of classes will help you focus on how to communicate flawlessly, interview well, and express your idea succinctly. Instructor Debbie Millman will guide you through the process of being your own brand.

Jennifer Chen
Jennifer Chen is a freelance writer and editor living in Los Angeles. She's written for O, The Oprah Magazine, Good Housekeeping, Real Simple, and several other publications. When she's not cooking delicious vegan meals, she's hanging out with her TV writer husband and twin girls.
Gender
Work
Gender Girlboss How to Quit Your Day Job
More From Work