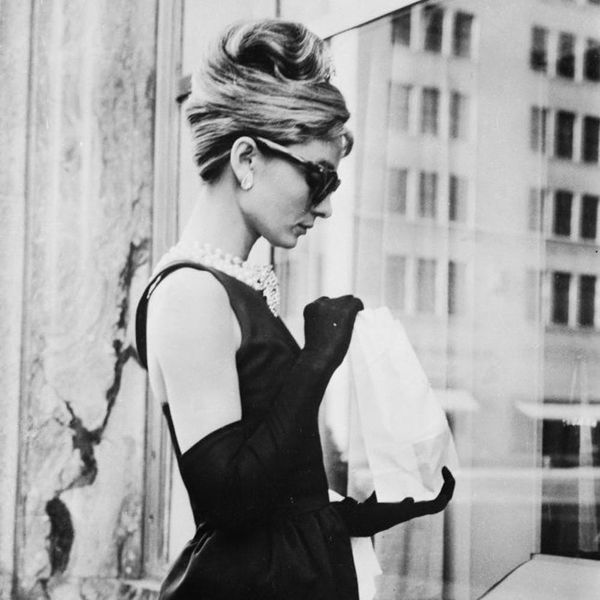 More than 50 years after its release, Breakfast at Tiffany’sAudrey Hepburn is still #StyleGoals: Reem Acra’s 20th anniversary bridal collection that debuted in Harper’s Bazaar last week was a total hit.

Breakfast at @tiffanyandco -the morning after our 20th anniversary collection launch with @harpersbazaarus and @carrielauren - photo @christianoth. Text: @harpersbazaarus: There isn't a fashion girl or a film buff who isn't familiar with the iconic image of Audrey Hepburn as Holly Golightly, stepping out of a yellow taxi at golden hour, coffee cup and pastry-bagged danish in hand. Clad in a black column gown designed specifically for the scene by Hubert de Givenchy–along with gobs of pearls and diamonds–she gazes longingly into the window of Tiffany & Co., admiring its sparkling contents as she takes a bite of her breakfast. It's too early for the bustle of tourists or the gaggle of Upper East Side shoppers to interrupt her in what feels like an almost religious ritual. And there, on the corner of 57th Street and Fifth Avenue in New York City, where the historic Tiffany & Co. flagship sits as a beacon of sophistication, elegance and glamour, BAZAAR.com pays homage to Hepburn in what is now known as one of fashion history's best moments. It was the magic of that noteworthy scene that lead Reem Acra straight to to Tiffany & Co. upon her arrival to New York from her native Lebanon more than 20 years ago. #NewYork #reemacra #luxury #beauty #fashion

But in order to complement the Holly Golightly-approved gowns at the designer’s spring/summer 2018 tributary show, Acra went for an unexpected manicure hue.

For the nails, the designer chose an uber-sophisticated, custom shade of black pearl, achieved by not one, but a mix of two of Zoya’s gorgeous polishes. The results are simply stunning.

The look was created by applying Naked Manicure Naked Base ($12) and Buff Perfector ($10), then mixing two coats of of Zoya’s Willa ($10, a “timeless classic black) with either Zoe ($10, a “semi-sheer opalescent white pearl metallic finish) or Leia ($10), which has colored flecks of fuschia, green, and gold to add some dimension. Finish the look off with some Naked Manicure Glossy Seal ($12). (Pro tip: You can also add a few Fast Drops ($16) to cut down on drying time and make sure you don’t smudge your handiwork after.)

What do you think of the Black Pearl hue? Tell us over @BritandCo.

Nicole Briese
Nicole is the weekend editor for Brit + Co who loves bringing you all the latest buzz. When she's not busy typing away into the wee hours, you can usually find her canoodling with her fur babies, rooting around in a bookstore, or rocking out at a concert of some sort (Guns N' Roses forever!). Check out all her latest musings and past work at nicolebjean.com.
Nail Art Designs
Nails
Nail Art Designs Nail Polish