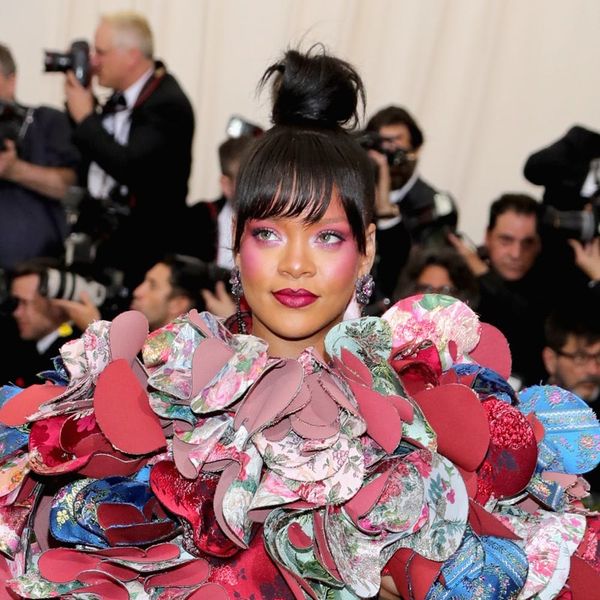 The 2017 Met Gala may have given us breathtaking looks from some of our fave stars, not to mention Kendall and Kylie Jenner trying to out-naked each other, Claire Danes’ controversial choice, and a few famous folks that we could barely recognize. Yet, despite all of the artistically fueled glitz and glamour, plenty of celebs not only failed to impress, but they were downright off-theme and pretty darn boring. That’s why even Rihanna has now thrown low-key shade at other attendees like Selena Gomez and Kim Kardashian over their Met Gala style.

There’s no denying that Rihanna brings her full (and hella strong) fashion game to the Met’s event every year, and 2017 was no different. Showing up to celebrate the Costume Institute’s “Rei Kawakubo/Comme des Garçons: Art of the In-Between” exhibit in a piece that came straight from the Comme des Garçons Fall 2016 runway, she absolutely nailed the theme and looked amazing while doing it.

With the baddest 🔥💋 Rih's the definition of the Met! @badgalriri @olivier_rousteing

And while fans are still fawning over RiRi’s style dominance, they’re also calling out the celebs who ignored the theme altogether and instead opted for outfits better suited to the Oscars (or ANY other red carpet event) as opposed to the artistically aimed Met Gala.

This hilarious meme has popped up, and when posted to social media, followers couldn’t help but notice Rihanna herself gave the image a like. Even RiRi is throwing (low-key) shade at stars who may have looked lovely, but frankly, totally failed to nail the theme of this epic industry event.

Do you wish more celebs had stayed on-theme at the 2017 Met Gala? Let us know @BritandCo!

Desiree O
Desirée O is a ‘Professional Bohemian’ who loves anything and everything related to the arts, entertainment, and pop culture. She ADORES being a ‘Newsy’ for Brit + Co, covering all of the latest tidbits of awesomeness that you want to read about. When she’s not writing, she’s either making messy art, going on long adventurous walks with her camera, or poking around over at bohemianizm (http://www.bohemianizm.com/). You can find out about Desirée O and her work at http://DesireeO.com/ or follow her on Twitter @DesireeO.
Met Gala
Celebrity News
Met Gala