7 Hot-Off-the-Runway Collections You Can Buy RN 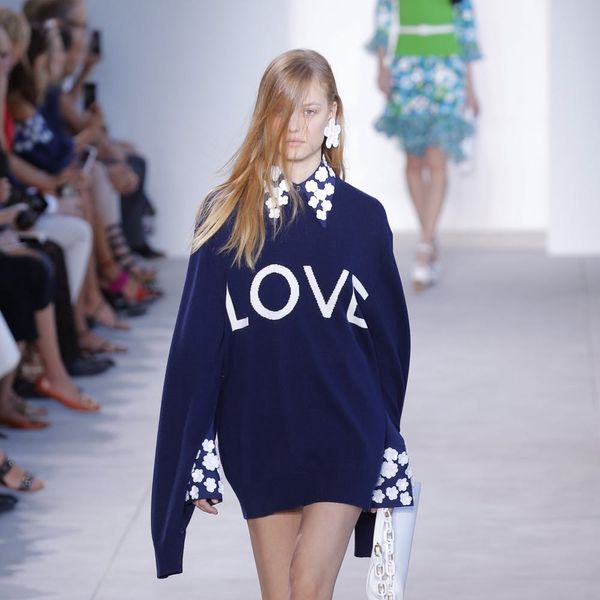 Times, they are a-changin’ in the fashion landscape. Social media and the Internet have begun to tear down the ivory tower that once was fashion, kick-starting a democratization of the industry, usurping power from the perfectly manicured hands of the fashion elite and placing it in those that really and truly should have more influence — the consumer. The “see now, buy now” phenomenon that many brands — and not just indie or new-to-the-scene labels either — are beginning to adopt is further proof of this shift. And we have to admit, we’re totally on board with the idea that we no longer have to wait six-plus months to score striking statement jewelry, jaw-dropping outerwear and Insta-worthy frocks, or even to recreate runway-inspired looks. Intrigued? We’ve listed all the collections you can scoop up right now below. All you have to do is hit buy.

1. Tommy Hilfiger: After last season’s Insta Pit stunt and the announcement of his collab with model of the moment Gigi Hadid (who, BTW, has a cool 23.7 million followers on Instagram), it should come as no surprise that Tommy Hilfiger would be one of the first brands to hop aboard the see-now, buy-now train. Between the luxe leather jackets, over-the-knee boots and cozy oversized sweaters, the collection screamed fall. (Photo via Randy Brooke/Getty)

2. Topshop Unique: Topshop took a partial approach to the see-now, buy-now trend with 60 percent of their 32-piece collection available for purchase just seconds after it made its debut on the runway. But you won’t have to wait long to scoop up that other 40 percent — the Spring/Summer 2017 collection will be made available online in November. (Photo via Tim P. Whitby/Getty)

3. Michael Kors: While Kors is largely following tradition with his Spring/Summer ’17 collection, a curated selection of just-off-the-runway pieces are already in select Michael Kors stores — including the swoon-inducing sweater above. (Photo via JP Yim/Getty)

4. Thakoon: The “see now, buy now” business model has been on Thakoon’s radar for a while now. Since last August, the brand has undergone a total transformation, re-emerging as a direct-to-consumer concept. During NYFW, designer Thakoon Panichgul presented his line of Fall 2016 clothes, all of which are now available to buy. There’s just one catch — each piece is made in a limited quantity. So best scoop ’em up stat. (Photo via JP Yim/Getty)

5. Banana Republic: Banana Republic called upon brand ambassador Olivia Palermo to curate a selection of spring ’17 picks for customers to shop right after their NYFW presentation. While there are plenty of elegant sundresses and flirty floral tops to be had, items like a suede moto jacket, ruffle-neck blouse and fringe-trimmed sweatshirt read RN. (Photo via Ilya S. Savenok/Getty)

6. Rebecca Minkoff: Like Thakoon, Rebecca Minkoff ditched the expected warm-weather threads in favor of fall 2016 duds that It girls and every girl can rock right now. Even better? The savvy designer stationed the show right outside her Soho store, where attendees could shop the new collection right after it made its way down the runway. (Photo via Fernanda Calfat/Getty)

7. Ralph Lauren: Ralph Lauren wasn’t about to pass up the opportunity to earn a bit of cutting-edge fashion cred. During the all-American design house’s show, the latest slew of chic threads immediately became available in stores and online. (Photo via Slaven Vlasic/Getty)

Libby MacCarthy
Libby MacCarthy is an urban planner turned writer with a love (bordering on unhealthy obsession) of all things fashion and beauty related. She lives for perfectly brewed coffee, farmer's markets, dinner parties and perusing impeccably designed boutiques. When she's not on the hunt for the latest trends, you'll likely find her plotting her next adventure or nose deep in a book. Libby currently splits her time between the East Coast and her adopted home of France. Follow her daily adventures on Instagram.
Designers
Trends and Inspo
Designers Fall Style
More From Trends and Inspo