What’s the Deal With Halotherapy and Salt Rooms? 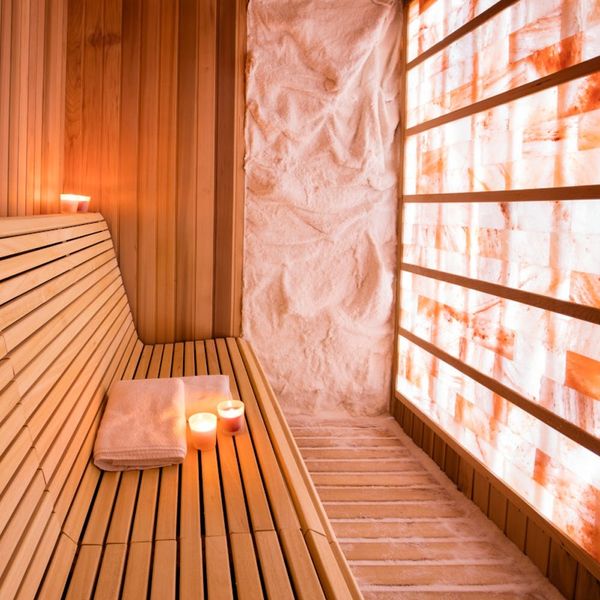 Halotherapy is not a revolutionary concept: Using salt as a healing remedy and antiseptic dates as far back as ancient Greek and Egyptian civilizations. But in modern times, salt rooms are becoming increasingly popular as a wellness treatment from coast to coast, as they’re said to have calming effects on your immune system, your lungs, and your nervous system — often paired with other self-care practices like yoga and meditation to double the benefits. We set out to discover whether relaxing in a room jam-packed with salt could actually make a positive difference in your health.

What Happens in a Salt Room?

Many spas with halotherapy rooms are filling them with Himalayan salt, believed to be the purest salt for this kind of therapy — thousands of pounds of it. Wellness centers like Hugh Spa in Los Angeles and Modrn Sanctuary in New York City have rooms built with bricks of salt, as well as salt completely covering the floors. Because it is modeled after traditional Korean spas, Hugh Spa’s major focus is on detoxing, according to its director of operations Catherine Bak; its salt room is heated to 140 degrees Fahrenheit and is made for shorter 15-to-20-minute sessions. Modrn Sanctuary’s room features heated floors, as well, and categorizes itself as an “active” salt room, explains founder Alexandra Janelli, because a machine called a halogenerator is also releasing additional salt into the air. “The heated salt in the room is releasing negative ions that can attach to the free radicals in your body, which can help you feel more grounded.”

In a salt room, you may want to just lay there, zone out, and cleanse your mind, which is completely possible. You are usually offered a kind of choose-your-own-adventure spa experience. At Hugh Spa, for an entrance fee of $20, you can hop from room to room to reap all the possible benefits of each wellness center, from the charcoal mud room, to the infrared magnet room, to the ice room for a cool-down. The main goal of the spa experience is to chill out, sweat it out, and then replenish the lost electrolytes with some bone-broth-based homestyle Korean food at the spa’s restaurant. In some spas, you have the option of taking wellness classes inside the salt rooms. For example, Modrn Sanctuary offers everything from simple electronic guided meditation or hypnotherapy sessions, to different types of yoga and Pilates, to astrology, Reiki, and crystal classes, Janelli tells us. Breathe Salt Rooms, also in the NYC area, gives you the option of simply relaxing in one of the rooms or in one of their salt beds, activating your muscles with a salty yoga class, or activating your soul with a chakra healing, meditation, or sound bath session.

What Are the Benefits of Halotherapy?

Dry salt therapy has been studied mostly within the context of the lung condition COPD. A meta study published in the International Journal of Chronic Obstructive Pulmonary Disease found at least some potential evidence for “improvements in oxygen saturation, respiratory function, and quality of life,” according to Dr. Chirag Shah, an emergency medicine physician and co-founder of Accesa Labs, an online lab testing service. “The disease process underlying COPD does have some similarities to asthma, which makes the findings potentially applicable across both diseases.” Many salt room clients report feeling clearer sinuses after the salt dries them up, especially if they’re suffering from colds, congestion, or asthma, but Dr. Shah adds that much more research needs to be done to explore and verify potential respiratory benefits of halotherapy.

“The feedback I’ve gotten is mostly skin benefits,” Bak says of Hugh Spa’s clients, who love coming to the spa to feel like they’re sweating out the “toxins” that seep into their skin from the heavily polluted LA air. Janelli echoes that her New York City customers feel equally cleansed after a visit to Modrn Sanctuary. “Your skin might feel a little dry, because salt is drying, but it’s actually bringing the moisture up the surface. It’s great for things like psoriasis, eczema, to dry them out, and salt has healing properties — it’s antiseptic, antibacterial, and antifungal,” Janelli asserts. Plus, she adds, the mineral content of the Himalayan salt can feel incredibly regenerating: “This salt is natural and pure; it’s what we’re made from. It’s got the 80-plus trace minerals that are found in our bodies.”

There’s a potential for salt therapy to have a positive effect on your mental health as well, because of the healing atmosphere it fosters. Mindfulness can invite a release of the feel-good hormone oxytocin, says Connie Omari, a licensed professional counselor and executive director of Tech Talk Therapy. Also, Omari shares, the air quality may make your brain that much sharper: “Dryness of the air creates a sense of calm that can help to declutter thoughts and invites organized and productive thought processes. This, in return, enhances mental clarity.” The relaxing environment and direct focus on inhaling and exhaling deeply can put you in the right headspace to drift off to sleep as well, she tells us.

More scientific study is needed to verify the health benefits of salt rooms, but they certainly can’t harm your health, and they’ve been reported to make users feel calm and clear in their heads, skin, and sinuses and give them an overall sense of balance. So we can’t see any excuse not to get salty.

Have you ever tried halotherapy? Tell us about your salt room experience @BritandCo.

From Your Site Articles
Mara Santilli
Mara Santilli is a freelance writer based in New England. Her work has appeared in several publications, including Shape and Marie Claire. When she isn't writing, she can be found munching on any piece of dark chocolate she can get her hands on, plunking out her favorite acoustic songs on the guitar, and finding the cheapest Broadway tickets possible. Follow her adventures on Instagram to see where she's headed next.
Astrology
Health
Astrology Healthy Living