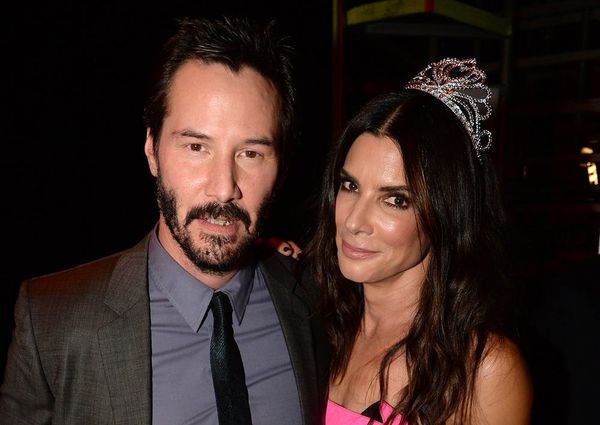 Winona Ryder might not be the only one of Keanu Reeves’ former costars who had a crush on him. Sitting down to chat about her new movie Bird Box on the December 20 episode of The Ellen DeGeneres Show, Sandra Bullock opened up about what it was like to work with the “handsome” actor in Speed, which came out 25 years ago.

“I think about how sweet Keanu Reeves was and how handsome he was,” Bullock told DeGeneres, emphasizing the last few words. “It was hard for me to really be serious. Like, he would look at me and I would be like, [giggly].”

Given Bullock’s reaction, DeGeneres wanted to know if they were ever more than friends and costars. “Did y’all get together?” she asked. “Did you date him?”

Bullock laughed, saying they never found a love connection offscreen. “There’s just something about me that I guess he didn’t like,” she quipped. “But I think we were probably friends for [so] long because we didn’t [wink-wink].”

In any case, Reeves obviously still has fond feelings toward Bullock. He told People in 2017 that he definitely wants to work with her again. (So far, they’ve done two movies, Speed and The Lake House.) “Oh my gosh, yeah, I’ve been trying,” he said at the time. “I’ve been looking for [film projects] with Sandra — not with her, but for us.”

Would you like to see Sandra Bullock and Keanu Reeves in another movie together? Tweet us @BritandCo!

Desiree O
Desirée O is a ‘Professional Bohemian’ who loves anything and everything related to the arts, entertainment, and pop culture. She ADORES being a ‘Newsy’ for Brit + Co, covering all of the latest tidbits of awesomeness that you want to read about. When she’s not writing, she’s either making messy art, going on long adventurous walks with her camera, or poking around over at bohemianizm (http://www.bohemianizm.com/). You can find out about Desirée O and her work at http://DesireeO.com/ or follow her on Twitter @DesireeO.
Nostalgia
Movies
Nostalgia