Switch Things Up With These 11 Scandinavian and Nordic Breakfast Recipes 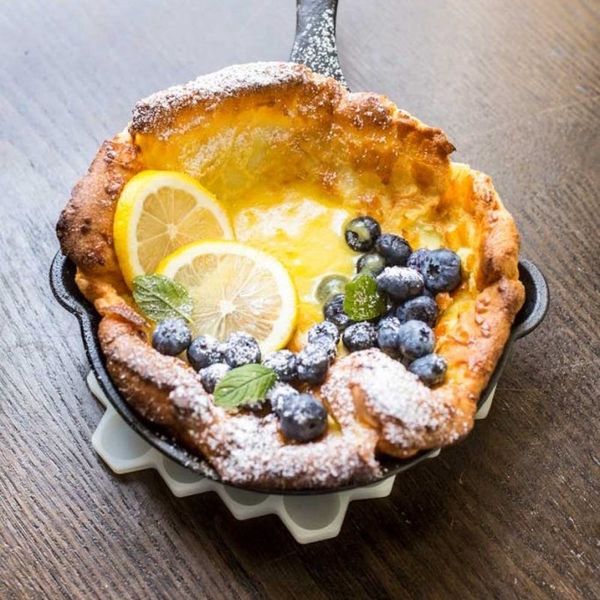 Look, we *love* breakfast bowl recipes and breakfast cookie recipes. But sometimes you want something a little… different. If you’re bored of the standard options, look to other countries for brekky inspiration. One of our favorite breakfast cuisines? Scandinavian and Nordic-influenced meals (AKA the hygge foods trend). Northern Europeans and Scandinavians seriously know what they’re doing when it comes to the most important meal of the day. Here are 11 of our favorite breakfast creations.

A traditional Scandinavian breakfast is comprised of a variety of ingredients together known as a smorgasbord. Bread, ham, cheese, liver pate, tomato, and raw bell pepper are typical ingredients — but an egg is often thrown in there for us Americans. (via Hummingbird High)

Dutch babies are essentially super-fluffy, eggy pancakes that are baked in the oven in a cast iron skillet. Top them with lemon curd and fresh blueberries for a sweet and fruity treat. (via Nerds With Knives)

Swedish pancakes are more substantial than crepes, but also quite eggy and fluffy. For this reason, they’re some of the most delicious pancakes EVER. (via The Faux Martha)

These aren’t exactly a low-maintenance option… but they’re *incredibly* delicious. They’re made with whole cardamom seeds, brown sugar, vanilla bean, milk, and flour. If you can’t find whole cardamom seeds at your local grocery store, you can always consider ordering them online. (via Hither and Thither)

Fun fact: In case you’ve ever wondered, porridge is any kind of grain mixed with water. This Norwegian option is made with rice, honey, milk, sugar, and butter, and topped with tart dried cranberries and cinnamon. (via Pickled Plum)

What makes Swedish pancakes even better? Topping them with raspberries, lemon, and whipped cream. Bonus points for using whipped lemon ricotta cream on these babies. (via Your Homebased Mom)

Stroopwafels are a sweet, molasses-based filling sandwiched between two waffle halves. WHY AREN’T THESE MORE POPULAR HERE?? Pro tip: To successfully cut your waffle in half, make sure to do the cutting when your waffle is still hot using a sharp, serrated knife. (via Sprinkle Bakes)

Chilled blueberry soup is a staple in Finland, which boasts a whopping 50 different strains of the fruit. To make this Finnish favorite, all you need is maple syrup, lemon, coconut cream, and a few assorted spices. And, of course, the freshest blueberries you can find. (via Black White Vivid)

These pancakes are similar to Dutch babies, but they have their roots in Germany. Pop them in the oven for about 30 minutes until the edges are a nice, golden brown. (via girl. Inspired)

Here’s another iteration of Norwegian rice porridge for you to try. Risgrøt is the real name of this hearty breakfast dish made with rice, milk, cardamom, and cinnamon. It’s traditionally served for lunch the day before Christmas, but we think it works well on *any* day of the year. (via The Modern Proper)

Often referred to as skolleboller (translation: school buns), these delicious pastries were specifically made for kids to take to school with them. Whip up a batch for your own kids or — let’s be honest — for yourself and your brunch crew. (via Analida’s Ethnic Spoon)
Maggie McCracken
Maggie McCracken is a freelance writer, blogger and aspiring digital nomad. She writes primarily about food, travel, yoga and healthy living, and she has a background in health and science journalism. You can read more of her work on her lifestyle and travel blog, The Olive Branch.
Breakfast Recipes
Recipes
Breakfast Recipes Comfort Food Recipes recipe roundup
The Conversation
Reviews:
More From Recipes