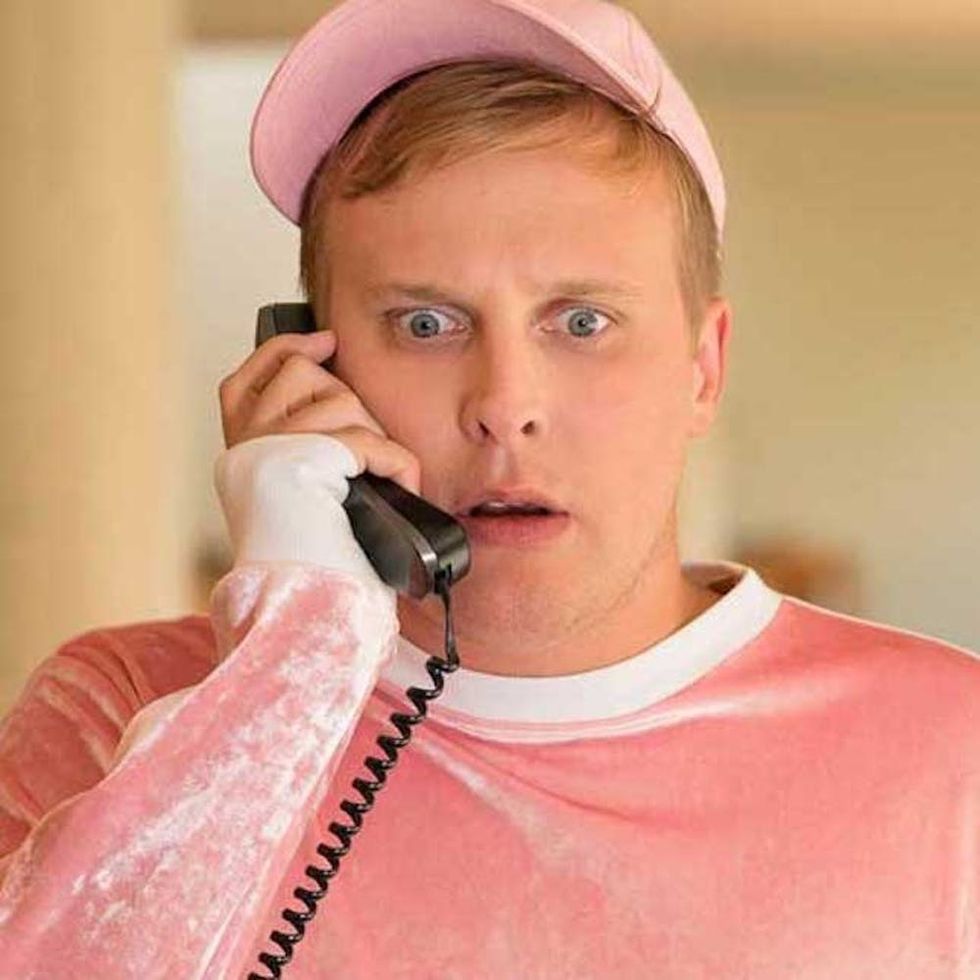 The Search Party four (is it now five, since Chantal won’t go away?) are back in New York, trying to move on with their lives in various ways. So let’s break that down, shall we?

As perhaps the least self-aware and most willing to just bop through life out of the four — not to mention someone who wasn’t actually involved in the death part of the murder — Portia (Meredith Hagner) has plopped back into her old life with the most ease. Her relationship with her mom is as dysfunctional as ever, and she’s just trying to find work as an actress.

She goes to an audition for a play that’s about the murders committed by Charles Manson’s followers. Can’t you totally see Portia playing Sharon Tate? Also, strange timing, since Manson just died. Anyway, the audition is super weird. Portia is made to call a woman she used to work with and tell the woman exactly what she thinks of her because “great actors tell the truth.” It’s exactly the kind of B.S. certain “artists” peddle, and Portia goes along with it, though she at least has the wherewithal to realize how bizarre it is.

Remember how Elliott has a book deal? Yeah, that’s still happening, but for how long? Elliott is a flake who can’t produce any work and instead chooses to lie that he finished the whole book but got mugged, and it was on his laptop in his bag, so now it’s gone. And he needs a new laptop (to replace the one he smashed).

It’s basically Elliott being Elliott, except for the fact that his guilt over Keith’s (Ron Livingston) murder is manifesting itself in Elliott’s hair falling out and hives breaking out all over his stomach. He also keeps saying Keith’s name in his sleep, which boyfriend Marc (Jeffery Self) takes to mean Elliott is having an affair. So Elliott must tell another lie, this time saying that Keith was his doctor at gay conversion camp when he was a kid — despite the fact that he has super liberal parents who were totally fine with his coming out. Yeah, that won’t come back to bite you in the butt, Elliott.

Chantal (Clare McNulty) has decided she loves Drew (John Reynolds), so she seduces him and they sleep together, though Drew is doing it because it’ll hurt Dory when she finds out. But in her post-coital search for snacks, Chantal finds the obelisk Drew took from Aunt Noni’s house that he used to kill Keith. She asks him why he would steal Aunt Noni’s award (turns out it’s an award for interior design) and he lies about it having a crack and says he didn’t want Chantal to get into trouble. Then he promptly buries the murder weapon in a field.

At work, a job has opened up in Shanghai and Drew wants it, but Alan (Kenneth Lee) is going to get the job because he speaks fluent Mandarin. So Drew’s master plan is to make Alan think that their boss, Max (Michael Showalter), has the hots for Alan’s wife.

Let’s just say that Dory (Alia Shawkat) is not doing well. She keeps seeing dead Keith everywhere, and she’s completely freaking out about being caught. She’s immobilized with fear; the only step forward Dory tries to take is to call Julian (Brandon Micheal Hall) about a tutoring job, but he says the company shut down. He does ask her about talking to him about the Chantal mystery for a piece he’s writing, but she panics and says no. He talks to Chantal instead, who offers up some very weird details about her “abuser” and being in the motel in New Hampshire. This story is unraveling faster than a ball of yarn.

Adding to the intrigue is the appearance of Keith’s ex-wife, Deb (Judy Reyes), and her friend Crystal (Jessica Chaffin). She thinks Dory knows where he is because he liked Dory so much, but Dory manages to keep her cool and lie about them breaking up. She then breaks into Keith’s apartment and sends an email from him to Deb, saying he’s stuck out of town following a lead. That seems ill-advised.

Dory does manage to find a place to stay with her old boss, Gail (Christine Taylor). Poor Gail is alone and broke, but she does have a massive apartment where Dory can crash. One night, as Gail drifts off into a drugged-up sleep, Dory confesses to her about killing Keith, knowing she won’t remember it in the morning.

It’s fascinating to watch how the major players are dealing with the aftermath of Keith’s murder. Surely it’s all about to come crashing down on them, especially since a man just found Keith’s body, but what would this show be if everyone ended up in jail? I’m trying to figure out exactly how this ends, but so far I’m drawing a blank.

The throwaway jokes on this show are incredible. As the first episode began, did you catch Elliott saying that one time a guy “chartered a jet just to watch [Portia] scrape [her] foot with a Ped Egg”? OMG.

Dory: “Are you guys medicated?”