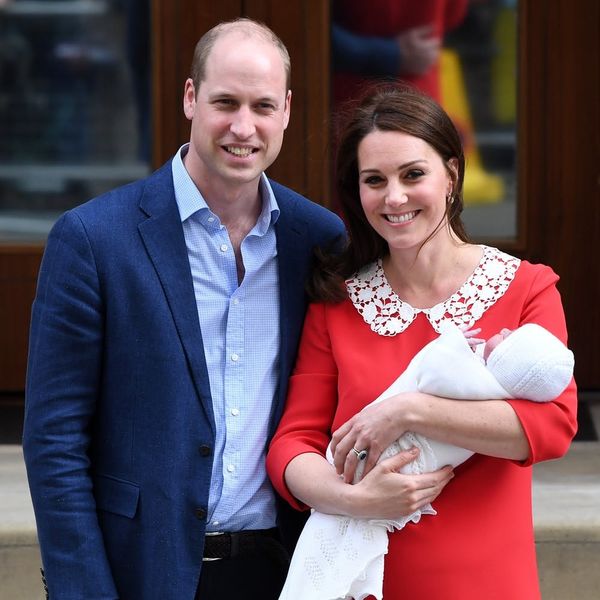 When Prince William and Duchess Kate Middleton debuted their bouncing first-born baby, Prince George, in July 2013, it was both a new and exciting time for royal watchers and a moment steeped in decades of tradition. Fast-forward to today, and we’ve seen the debuts of two more royal babies in the family, including the couple’s newborn third child on Monday, April 23. Here’s how the youngest little prince’s first photo op compares to those of his older brother and sister, Prince George and Princess Charlotte.

When Prince George was born, his parents waited an entire day to emerge from the Lindo Wing at St. Mary’s Hospital in London (where the late Princess Diana gave birth to both William and Harry). When they finally stepped out to greet the crowd of photographers and well-wishers on July 23, it was with the then-day-old baby George swaddled cozily in his mother’s arms. The Duchess wore a blue-and-white polka dot Jenny Packham dress for that first appearance, thought to be a nod to the green-and-white polka dot dress that Diana wore after giving birth to Prince William.

The timeline for Princess Charlotte’s debut in 2015 was much shorter. The only girl and now-middle child of the royal heirs was photographed for the first time less than 10 hours after she was born, and in much the same way as her brother. Wrapped in a soft knitted blanket, Charlotte dozed in her mother’s arms while the growing royal family received well wishes from paps and fans waiting outside St. Mary’s.

As in her previous post-birth appearance, the Duchess wore Jenny Packham — this time, a white-and-yellow shift dress that she paired with nude heels.

With the birth of baby number three, Duchess Kate stuck with Jenny Packham, opting for a red dress with a white lace collar as she debuted the newest little prince at the hospital a few hours after his birth. The look was reminiscent of the outfit Princess Diana wore to debut Prince Harry in 1984.

We probably have to wait a day or two before learning of the prince’s name, but bookies in the UK are betting on the pair continuing with traditional royal names. Among the top contenders are Arthur, Albert, Philip, Frederick, and James.

How many kids are in your family? Let us know @BritandCo!

Kat Armstrong
Kat has been a writer, social media maven and mom for longer than she's willing to admit. She's also spent time in front of and behind the camera, interviewing celebs, politicians and acting as a producer for fashion and artistic photography shoots. When she isn't writing for various orgs and publications, she's hanging with her kids, husband and French Bulldog, Peter, in Toronto, Canada.
Royal Baby
Celebrity News
Royal Baby Royal Family
More From Celebrity News