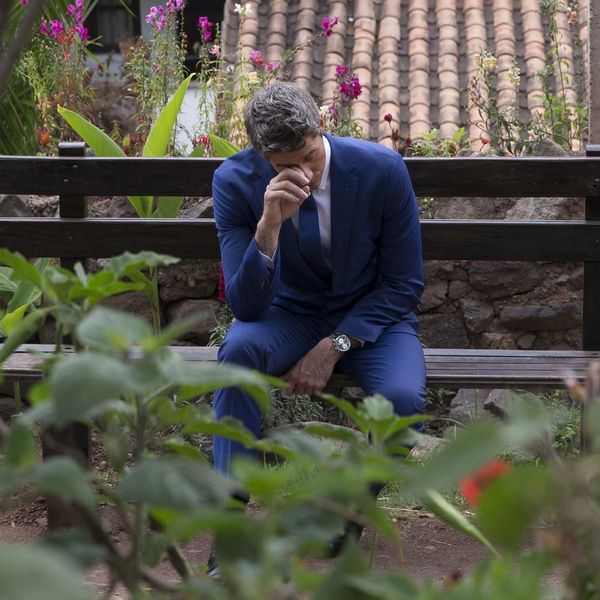 There were some big shockers on the small screen in 2018, including Arie Luyendyk Jr.'s change of heart on The Bachelor and several major deaths of beloved fictional characters. Click through to see some of the most shocking moments on TV this year. Warning: Spoilers ahead for This Is Us, The Walking Dead, The Bachelor, Riverdale, Jane the Virgin, Grey's Anatomy, Younger, The Affair, and Modern Family. (Photos via ABC/Paul Hebert + Ron Batzdorff/NBC + Patrick Wymore/Showtime + TVLand)

Jack dies on This Is Us. Yes, we knew that Jack was going to die. But no, that did not make his actual death any easier. In February, when we finally learned what happened — he went into cardiac arrest after saving the entire family from a catastrophic house fire — people were so devastated that they considered taking the next day off of work to recuperate and rehydrate (because of all the tears). And because the fire was started by a faulty Crock-Pot, many viewers threatened to throw out their slow cookers, prompting the appliance company to issue an official statement about Jack's death. (Photo via Ron Batzdorff/NBC)

Carl dies on The Walking Dead. Technically, the real shocker — Carl getting bitten by a walker — happened on the midseason finale in 2017. We knew death was imminent then, but that didn't make his actual demise any less devastating. In February, when the show returned from hiatus, Carl said his final goodbyes to his loved ones, pleaded with his dad, Rick, to find a better, more peaceful way forward, and then took his own life. It was a tragic end for a beloved character, made even more heartbreaking by the fact that it set the stage for longtime star Andrew Lincoln's exit. (Photo via Gene Page/AMC)

Arie Luyendyk Jr. pulls a Mesnick on The Bachelor. Chris Harrison wasn't kidding when he said the season 22 finale would be one of the most dramatic endings in franchise history. After proposing to Becca Kufrin in Peru, Luyendyk decided he had made a mistake and broke up with his fiancée — on camera — during one of their so-called "happy couple weekends." He then reconciled with runner-up Lauren Burnham, eventually proposing to her on the live portion of the finale in March. (Photo via ABC/Paul Hebert)

Midge dies on Riverdale. The musical episode of Riverdale was, true to its title, a night to remember — and not just because of the performances, although those were something to behold, too. In the final moments of the show, a curtain rose behind Alice Cooper, revealing Midge's gory murder. She had been stabbed and pinned to the wall by knives and scissors, and a message in blood read: "I Am Back From The Dead. All Those Who Escaped Me Before Will Die... B.H." (Photo via Dean Buscher/The CW)

Michael comes back from the dead on Jane the Virgin. We were blindsided and devastated when Michael died suddenly from complications of his gunshot wound in season 3. So you can imagine our surprise when, in the final moments of the season 4 finale, Jane showed up at Rafael's apartment, ready to start their lives together, only to find her presumed-dead husband behind the door. We've been on the edge of our seats ever since, waiting for all to be explained in season 5. (Photo via Patrick Wymore/The CW)

Teddy reveals she's pregnant with Owen's baby on Grey's Anatomy. After Owen and Amelia split in season 14, Owen fled to Teddy's home in Germany to declare his love for her. They had a passionate, romantic reunion, until Owen revealed that he and Amelia had broken up only hours before. Teddy sent him back to Seattle to figure things out, only to show up herself a few weeks later — with the news that she was pregnant with Owen's baby. (Photo via ABC/Mitch Haaseth)

Charles learns the truth about Liza on Younger. We had been waiting for Charles to find out about Liza's lie — that she's a 40-something mom and not the 20-something millennial she pretended to be to get her job — since they first met in season 1. But we still weren't prepared for how it happened (creepy author Edward L.L. Moore exposed her after she convinced Charles to denounce him for sexual harassment), or for how angry he was with her afterward. (Photo via TVLand)

Alison dies on The Affair. With just a few episodes left in season 4, Alison went missing, prompting her ex-husbands Cole and Noah to team up to look for her. Their search ended in tragedy, as Alison was found dead in the water near her home. It appeared to be a suicide, but as we learned one episode later, it was actually a murder — at the hands of her married boyfriend, Ben. The shock of the death was compounded by the real-life mystery of Ruth Wilson's unexpected departure, which she said she wasn't "allowed" to discuss in public, but which creator Sarah Treem said Wilson had requested. (Photo via Patrick Wymore/Showtime)

Haley finds out she's pregnant on Modern Family. After breaking up with her professor boyfriend earlier in season 10, Haley reunited with her high school sweetheart Dylan. They were on a date at a carnival when Dylan slammed into Haley in the bumper cars, causing her to shove her lipstick up her nose. At the hospital to get it extracted, they (and we) learned that Haley is expecting. (Photo via ABC/John Fleenor)

Nicky is alive on This Is Us. We thought Nicky had died in Vietnam, and we weren't the only ones. On a mission to learn about his father's time in the war, Kevin discovered that his uncle Nicky was not listed among the victims who died in combat. Then, at the end of the fall finale, we saw an older man in a trailer, with a stack of mail addressed to Nicholas Pearson. So now the question is: What happened between Nicky and Jack in Vietnam to make them cut ties? (Photo via Ron Batzdorff/NBC)