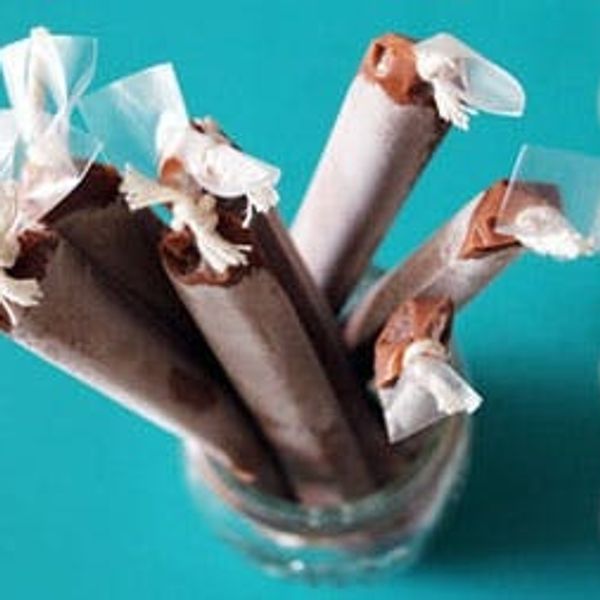 Let us start by listing out a few things that are really awesome:

So… what happens when you combine ALL of these awesome things? Kahlua Pudding Pops, of course! With a few ingenious tools and a handful of simple ingredients, you can whip these up in 15 minutes flat! We do recommend freezing them for about an hour before serving, but they're great at any temperature.

First, mix up your pudding!

Pour the packet of pudding mix into a bowl, add 1 cup of milk and whisk. Then add the kahlua and vodka and keep mixing. Lastly, fold in the cool whip. Place in the fridge while you prepare the tubing.

Because we used a large mixing bowl, we poured our pudding into a milk carton to store in the fridge, but also to make the pouring process easier.

To prep your tubing, simply cut off six pieces of tubing, about 12 inches long each. Tie a knot at one end either with the tubing itself or with a string.

Now it's time to funnel! Our funnel was slightly larger than the opening in the tube, so we cut a small slit to make it fit. Now, pour your pudding!

Use your finger to squeeze out any excess before tying the other end.

Repeat until you're out of pudding.

Place in the freezer until you're ready to serve! These pops won't become completely frozen like a popsicle, but more like a smoothie.

Since they have a pudding like consistency, you can throw them in a cooler for a picnic, and they'll be perfectly thawed when you're ready to imbibe.

And yes, these count as both a dessert and a shot. If you play your cards right (aka follow our directions), each of these adorable pops is equivalent to just under a shot! Love it.

Anjelika Temple
As Co-Founder and Chief Creative Officer of Brit + Co, Anjelika Temple brings her voracious consumption of all things creative and colorful to DIY projects, geeky gadgetry finds and more. When she's not DIY-ing her heart out, you'll find her throwing dinner parties with friends or adventuring with her husband David, their daughters Anokhi and Indira, and their silly dog Turkey.
Spike Your Sweets
DIY Recipes
Spike Your Sweets
The Conversation
More From DIY Recipes