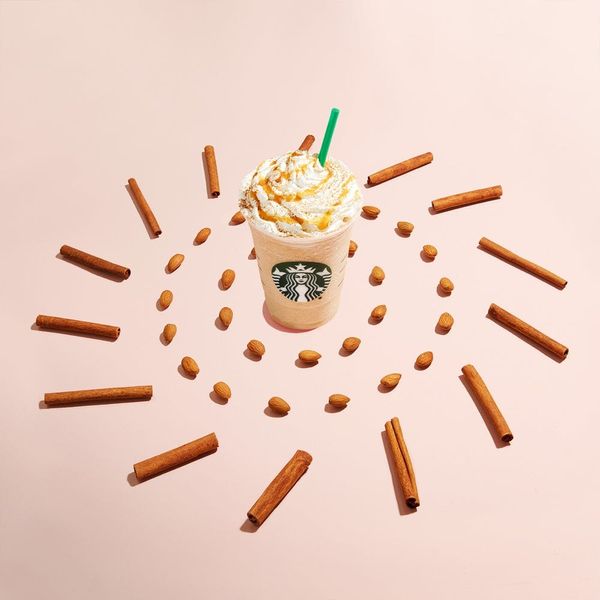 We know you’re probably still happily sipping away on Starbucks’ Iced Cascara Coconut Milk Latte and Iced Coconut Milk Mocha Macchiato. That is, when you’re not enjoying the Iced Piña Colada Tea Infusion they’ve recently debuted. But we also know that won’t stop you from wanting to try the newest delicious drink from our fave coffee-fueled brand, which also happens to be the “perfect beverage to end the summer and welcome fall.” It’s time to order up a Horchata Almond Milk Frappuccino. Mmm!

Beginning today (August 8), Horchata Almond Milk Frappuccino blended beverages are being introduced at participating Starbucks locations across the US and Canada.

Inspired by the popular Horchata beverage, which apparently varies by culture and region, Starbucks has created their own take on the drink by blending together almond milk, cinnamon dolce syrup, coffee, and ice. Then, because it’s Starbucks, whipped cream is added on top with a swirl of caramel and cinnamon and sugar sprinkles.

While it’s definitely sad to be thinking about the end of summer, at least we have the Horchata Almond Milk Frappucino to make each day a little brighter (and yummier).

Do you like the sound of Starbucks’ new Horchata Almond Milk Frappuccino? Let us know @BritandCo!

Desiree O
Desirée O is a ‘Professional Bohemian’ who loves anything and everything related to the arts, entertainment, and pop culture. She ADORES being a ‘Newsy’ for Brit + Co, covering all of the latest tidbits of awesomeness that you want to read about. When she’s not writing, she’s either making messy art, going on long adventurous walks with her camera, or poking around over at bohemianizm (http://www.bohemianizm.com/). You can find out about Desirée O and her work at http://DesireeO.com/ or follow her on Twitter @DesireeO.
Coffee
Food News
Coffee Starbucks
The Conversation