Student Spotlight: Sarah Mecke On Turning Calligraphy Into A Side Hustle 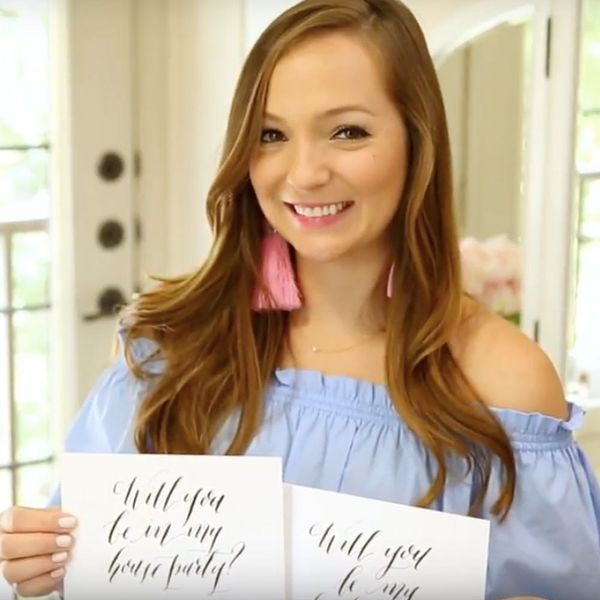 We joined college student and creative business owner Sarah Mecke to talk about how making time for creativity has changed her life. As a full-time college student, Sarah could have easily made the excuse that she didn’t have time for creativity, but she committed to making the time. Sarah took our Calligraphy 101 online class two years ago, and we checked in to see how it’s going.

Watching Sarah use a calligraphy pen, you wouldn’t know that she’d just picked it up two years ago, all while being a full-time student. But sure enough, she’s managed to learn calligraphy, launch her own business AND earn a degree. In fact, she’d recently graduated when we visited her home studio in Dallas, TX. Sarah invited us over to talk about how her life has changed since taking Calligraphy 101.

The story starts midway through her college career. Sarah had always thought of herself as creative and grew up loving art. “I’d always wanted to take a Calligraphy class but in person classes are so expensive. Being a student, I didn’t really have the time or necessary funds to take a class or to spend the time and the money to go and take a class from somebody. Most classes in person are $150 or something like that.”

That’s when she discovered B+C classes, and Calligraphy 101 caught her eye.

Before that, she’d dabbled in hand lettering and had just launched a hand-lettering business on the side.

“Having a business and being a full-time student is very hard, especially when I am in classes that are pretty rigorous. Blowing off steam is a really big deal for me, and for my mental health, I think I needed an artistic outlet.”

“My love for Calligraphy really started with hand lettering. I would browse Pinterest, and see all these beautiful pieces that people had hand lettered. Then I realized they were actually calligraphy and not hand lettering — that’s why mine wasn’t looking as good.”

With this fledgling business underway, she enrolled in Calligraphy 101 taught by Lauren Essl. It all started at a desk in her dorm room.

“I was able to incorporate my new calligraphy skill into my business and make prettier, more refined and better items for people.

Watching the letters flow from her hands, you’d think that it came naturally from the start. But her relationship with calligraphy hasn’t always been as graceful.

The first time she tried, it was a kit she bought at a craft store.

“I was absolutely terrible,” she laughs. “I think I scratched through my paper. I left a huge hole in the middle of my paper because I didn’t know how to use the pen. It was kind of a disaster.”

“I became overwhelmed once when I was taking a class, and that was [because] it was just so much information. But I was able to pause it, calm myself down, play it back again, and that absolutely fixes the problem. The first time I would get just the bits and pieces of watching the film, and then after the third or fourth time, I was actually getting the nuances, and I would seeing how she was holding the pen. I was seeing how Lauren was dipping the ink. You really pick up on the technique when you are able to watch it over and over again. I feel, in an in-person class, that you are not able to replay in your mind over and over. I don’t think you pick up as much.”

She’s come a long way since. What she’s most proud is how she’s developed her own unique style.

She’s graduated now, and the dorm room isn’t the only thing she’s outgrown. “Since [starting out], I have expanded a little bit, and so I use a different ink and I still use the same pen, which, I’m obsessed with that pen. I’ve definitely bought more nibs because it only came with one. I have like, a hundred now.”

Sarah went on to take upwards of 15 more B+C classes since then, including Calligraphy 201 (also taught by Lauren Essl). It was during that class that it really occurred to her what she was capable of with calligraphy skills.

“Lauren was able to teach us about more useful uses for calligraphy: addressing envelopes, making our own prints. She helped us take what we had made, put it into Illustrator and make it into a vector image so we can use it on anything that we want. From then, I was able to create my own logo. I kind of branched off into making anything that I want.”

Her calligraphy skills gave her business a new focus, taking it from a side hustle to a personal brand. Business is picking up, and she built her own website earlier this year. On it, you can find her line of paper goods, phone cases, clothing and mugs, all featuring her calligraphy and design work. That’s something that Sarah says she would never have thought she would be able to do.

But calligraphy is more than a business to Sarah.

We closed our conversation with Sarah by asking how B+C has helped with her creativity.

“Brit + Co has helped mold me into the type of artist and the type of creative person that I want to be. I have always wanted to have certain skills that I thought I would never be able to have. I never knew that I would be able to learn Illustrator or Lightroom, and now I have been able to take what I have learned in the Brit + Co classes, and apply them to my business and make it so much more beautiful than I ever thought possible.”

And for those who believe they’re not creative, here’s what Sarah has to say about that:

“To people who feel that they are not creative, I would say, I don’t think that that’s the case. Everyone has creativity in them and it doesn’t matter if you are an amazing artist or you are a great photographer. You could be a great baker. That’s creativity. You could be really great at math, that’s creativity. You’re amazing at problem solving. You can do absolutely anything because everyone has a creative capacity.”

Ready to turn your passion into a side hustle like Sarah did? Check out our assortment of business courses to get started.

Sarah Vogt
Sarah is an amateur photographer and travel blogger living in beautiful San Francisco. Here at Brit + Co, she helps head up marketing and online classes. When she's not working, you'll most likely find her dreaming up her next adventure. Follow along on her blog, Let's Go Places, where she shares stories, travel tips and photos from all the beautiful places she's explored.
Calligraphy
Online Classes
Calligraphy Entrepreneur Online classes