PSA: You Might Want to Rethink That Subway Chicken Sandwich 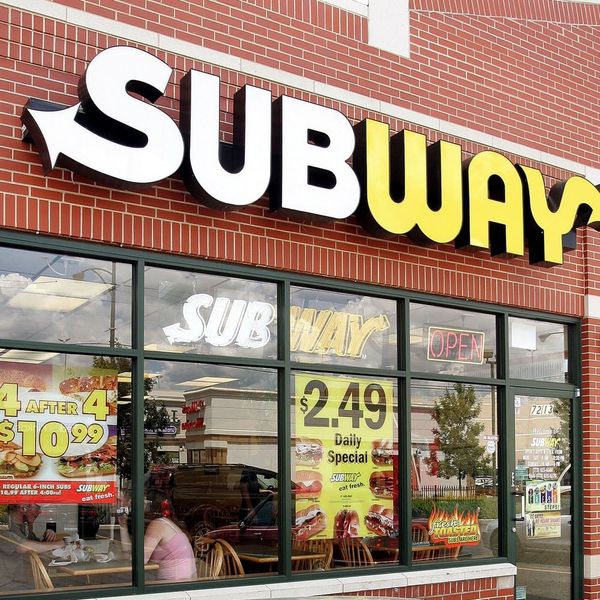 Ah, Subway — a fresh, protein-packed, healthy spin on fast food for the days you just can’t with cooking, right? That all depends on what you order, according to a new report. Canada’s CBC News probed into one of the restaurant’s more popular meat options, and their findings weren’t such great news for fans of chicken.

Running a DNA analysis of some of Subway’s chicken sandwich options, including the Oven Roasted Chicken and Sweet Onion Chicken Teriyaki, investigators found that the poultry being used in the sandwich was comprised of 50 percent (or less!) real chicken product — gulp.

First taking samples from the sandwiches and then isolating them into smaller pieces, the chicken was scored against sandwiches from other chains like Wendy’s, A&W, McDonald’s, and Tim Hortons.

Taking into account seasoning, marination, and processing, which would lower a piece of meat from its 100 percent chicken DNA status, most restaurants fell into the 85-89 percent chicken range, with McDonald’s at 85 percent (no doubt, thanks to their recent artificial-free menu change) and A&W at the top of the heap. Subway, however, didn’t even come close, with the Oven Roasted Chicken Sandwich scoring just 53.6 percent and the Sweet Onion Chicken Teriyaki Sandwich registering at a shocking 42.8 percent — YIKES.

Apparently, the other half of these sandwiches was comprised of soy (among other things — there were about 50 ingredients total between all six chain sandwiches that were tested). Soy isn’t necessarily bad for you, depending on your school of thought (the popular ingredient has been widely debated with regard to health benefits and risks for some time now), but it certainly isn’t chicken, and, as Toronto resident Irena Valenta told CBC, “That’s misrepresentation.”

Subway Canada, meanwhile, disputed the outlet’s findings, noting that they could not confirm the veracity of the study, adding that they were concerned about the “alleged findings” regarding the “proportion of soy content.” “Our chicken strips and oven roasted chicken contain one percent or less of soy protein,” a representative told CBC. “We use this ingredient in these products as a means to help stabilize the texture and moisture.” The company went on to claim they use 100 percent white meat chicken, which is marinated, oven roasted, and grilled, with recent tests meeting quality standards. They did, however, state that they would do a double check with their supplier.

Are you surprised by the CBC’s findings? Share with us @BritandCo.

Nicole Briese
Nicole is the weekend editor for Brit + Co who loves bringing you all the latest buzz. When she's not busy typing away into the wee hours, you can usually find her canoodling with her fur babies, rooting around in a bookstore, or rocking out at a concert of some sort (Guns N' Roses forever!). Check out all her latest musings and past work at nicolebjean.com.
Fast Food
Food News
Fast Food
The Conversation
More From Food News