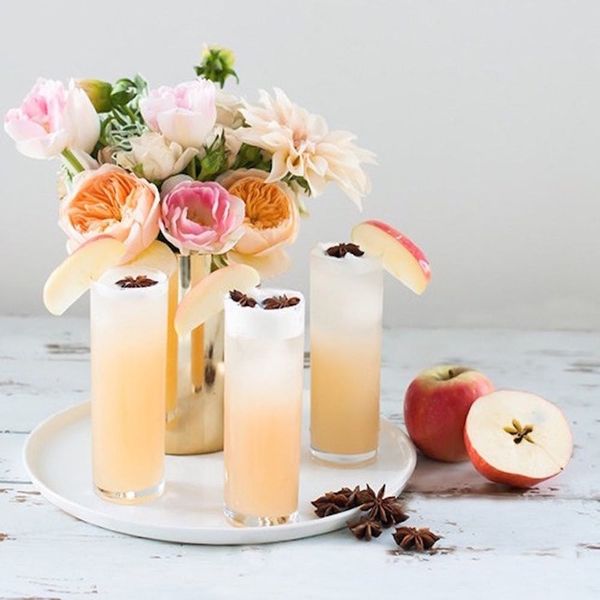 As the leaves start to change and the air gets crisper, apples of all kinds become ripe for the picking. This means that weekend trips to the orchard for hayrides and fall fun are a *must.* And you know you’ll get caught up in the excitement and come home with a ton of apples and gallons of cider you’ll struggle to use up before Christmas. Thankfully, some of the best creative apple recipes come in the form of cocktails. Once you get all those apple cinnamon galettes and apple cakes out of the way, why not booze things up a bit? Sit back, relax and keep reading to fall in love with 17 sweet and spicy apple cocktails that are perfect for autumn.

2. Apple Cider Moscow Mule: Ginger beer already has a fall-like spice to it, so it only makes sense to pair it with apple cider. Serve in a copper mug and add a cinnamon stick to garnish. (via Hot Beauty Health)

3. Apple Cider Shrub Cocktails: Shrubs have certainly had their moment over the last couple of years, and this apple version takes the trend straight into the colder months. It’s simplified from the typical recipe, so you can get to drinking in a snap. (via Macheesmo)

4. Apple Mojito: Transition from summer to fall with this refreshing take on our favorite minty cocktail. Thinly slice one of the apples you picked to float on top and soak up those wonderful flavors. (via Cake ‘n Knife)

5. Apple Sidecar: Fancy putting on the ritz? This elegant French cocktail is infused with apple and will bring class to any fall dinner party. (via Culinary Ginger)

6. Apple Brandy Allspice Fizz Cocktail: This beautiful cocktail is full of soul-warming spice that’s perfect after an afternoon of apple picking. Complete the whole thing with a luxurious froth from whipped egg white and fizz from club soda. Your friends will be thanking you for sure. (via Sugar & Cloth)

7. Bourbon Cider Punch: Cold-weather cocktails don’t have to be warm. Trade in your mulled wine for this chilled punch that’s still perfect for fall, but with an exhilarating crispness. (via Garlic and Zest)

8. Caramel Apple Cocktail: This cocktail is no joke. It sports spiced rum, caramel liqueur and apple liqueur, with a tiny bit of caramel syrup for that classic seasonal flavor. (via Lemons for Lulu)

9. Apple Cider and Elderflower White Sangria: Ginger, rosemary and elderflower are just a few of the aromatics you’ll taste in this sangria. A couple of glasses later, you’ll be bobbing for apples in the pitcher. Don’t worry — you won’t be the only one! (via The Floating Kitchen)

10. Apple Cider Gin Fizz: The lightness of this cocktail makes it hard to stop at just one. They’re creamy enough that you could easily serve them with brunch or lunch without feeling too heavy. (via Yes to Yolks)

11. Harvest Shandy: It doesn’t get more autumnal than pumpkin beer and apple cider. Combine them both and you have a shandy that beats all of the summer versions by a mile. (via Lemon Blossoms)

12. Aged Brandy Apple Cider Hot Toddy: Say hello to comfort in a cup. Whether you’re under the weather or the temperature change has you feeling blue, this apple-infused hot toddy is the BEST medicine. (via Country Cleaver)

13. Apple Cider Margarita: Get ready to change everything you know and love about margaritas. This one still has tequila (obvi), but instead of citrus and triple sec, it’s flavored with apple liqueur and cider. Get ready to wow everyone on Taco Tuesday when you serve these alongside your favorite Mex food. (via Food Fanatic)

14. Spiced Apple Old Fashioned: This old-fashioned cocktail gets a modern spin with apple and cinnamon bitters. It’s perfect for a quiet, romantic night in front of the fireplace with your significant other. (via Jojotastic)

15. Apple Pie Moonshine: Autumn bonfires call for plenty of apple pie moonshine. Make your own in the slow cooker with this easy blend of vodka, Everclear, cider and apple juice. (via Litehouse Foods)

16. Sanguine Sangria With Apple and Pomegranate: Halloween is the perfect opportunity to break out this impressive sangria. The best part is the boozy soaked apple left over when you finish your glass. (via Will Frolic for Food)

17. Skinny Slow Cooker Caramel Apple Cider: Spiked apple cider that doesn’t pack tons of calories is definitely a party *win.* Keep it warm in the slow cooker and let everyone serve themselves all night long. (via The Cookie Rookie)

Paige Johnson
Paige is a blogger, food writer and culinary master from Louisville, Ky. She's a newlywed who's obsessed with dogs and renovating her 117 year old home. When she's not working on her blog — My Modern Cookery — you can find her binge watching F.R.I.E.N.D.S with a triple shot latte in-hand.
Apple
Cocktails
Apple Fall Recipes recipe roundup
The Conversation
Reviews:
More From Cocktails