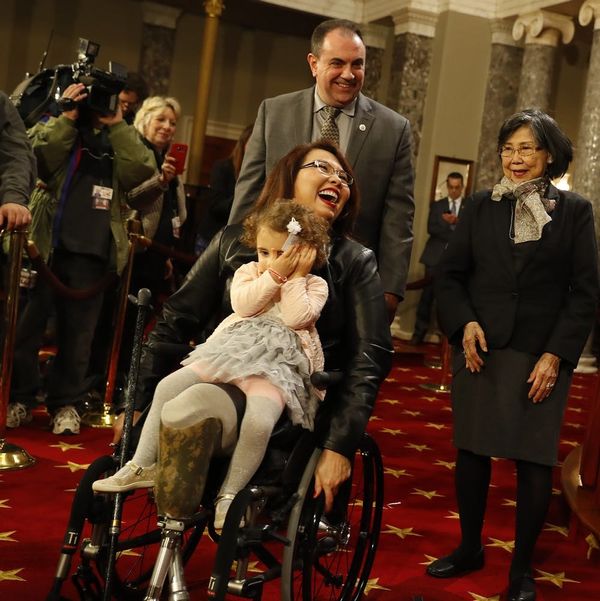 News broke Tuesday that Tammy Duckworth, a Democratic senator from Illinois, is pregnant with her second baby. The announcement of Duckworth’s pregnancy made waves not just because she’s in the national spotlight as a senator, but because she will become the first senator to give birth while holding office, the Chicago Tribune reported. Duckworth, who is 49, gave birth to her first child in 2014, and was elected as a senator in 2016. Duckworth’s unprecedented pregnancy is cause for celebration for her family, but also points to issues of representation in Congress.

This is the second time Duckworth has made Senate history: She’s also the first disabled woman to be elected to either chamber of Congress. Before she was a senator, Duckworth was a member of the National Guard and the Army. While she was in Iraq in 2004, the helicopter she was riding in was shot down, and Duckworth lost both of her legs. Duckworth’s presence as a disabled woman calls attention to the vast disparity between disabled and non-disabled people in Congress; disabled people make up 19 percent of the total US population, yet only have one percent representation in the Senate.

The fact that Duckworth will also be the first active senator to give birth, and at the age of 49 (she’s been vocal about her family’s use of IVF), also points to the lack of representation of young women in Congress. Perhaps one of the reasons there have not yet been any births from active senators is because the age requirement for senators is 30, and the average age of first-time moms is 26 years old. Further, the average age in the Senate across genders is 62 years old, and very few women consistently held office in the Senate until the 1990s. The gender and age disparities in Congress all add up to a major unlikelihood that any of these elected officials would be having babies while they hold office.

Over the last few decades and certainly in the last couple of years, there’s been a major push to have better representation of minorities, including people of color and women, in elected office. The question of age hasn’t really come up, however, despite the fact that millennials comprise about one-third of voting-aged people. The inclusion of younger women in national politics may be a particularly interesting point for Democrats to consider, as young people voted overwhelmingly in favor of Hillary Clinton instead of Donald Trump in the 2016 election.

And there’s clearly an interest among young women, especially those who lean left, to win elected positions. Since the election, there has been a massive increase in the number of young women looking to run for elected office at all levels of government. Run for Something, a progressive group that launched the day after Trump was elected, recruited more than 3,000 people under 35 to run for office (albeit on the state and local levels) as of February of last year, according to the Christian Science Monitor.

Of course, there’s no guarantee that young women could accomplish all the change that’s necessary for national politics, nor is it a given that they will always vote in the interests of their constituents. Any elected official would need to be held accountable, but if better and more equal representation is a priority for some members of Congress, it’s worth adding younger candidates into the mix.

When considering representation, it’s crucial to consider everyone who is at the margins of politics. It’s encouraging to see more gender and racial diversity, but Congress is still far from parity between any dominant group and minorities. For a better representative Congress, there need to be more LGBTQ+ people in office, more disabled people, more people of color, more people who aren’t Christian (or aren’t religious at all), and more young people. Otherwise, Congress remains almost entirely filled with those who benefit most from the political status quo, and if the last few months under Trump have demonstrated anything, it’s that progressive change is needed in DC and around the country.

What do you think about age and representation in Congress? Tell us on Twitter @BritandCo.