Tammy Duckworth to Become First Sitting Senator to Give Birth 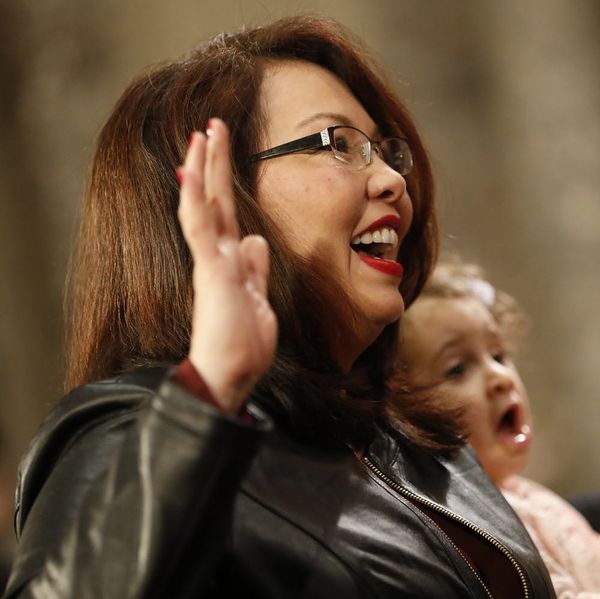 She’s currently six months pregnant and is expected to give birth in April, shortly after her 50th birthday. In conversation with the Chicago Sun-Times, Duckworth described getting pregnant a second time as “a struggle.” She had a miscarriage in 2016 and went through multiple rounds of IVF before conceiving.

If you don’t know this plucky politician’s backstory, get ready to be even more inspired. Duckworth was born in Thailand to a Thai mother and American father and moved to Hawaii when she was 16. She joined the army after university and eventually became a lieutenant colonel, serving in the armed forces for 23 years. In 2004, her Black Hawk Helicopter was shot down in Iraq and she lost both of her legs and shattered her right arm. Did that stop her? No way! She continued to serve until 2014. She also launched her run for Senate while on mat leave, so she quite the multitasker.

We’re not the only ones who are impressed by all that Duckworth has accomplished:

There is "BEAST MODE".

And then there is "DUCKWORTH MODE".

Tammy Duckworth is disabled and she will be the first senator to give birth in office — I feel like eugenics just lost major ground today.

Me: #TammyDuckworth's pregnancy is her own business…
Also me: A DISABLED SENATOR IS PREGNANT AND OH MY GOSH THERE ARE LITTLE DISABLED KIDS WHO WILL GROW UP WITH TAMMY DUCKWORTH AS PROOF THAT MOTHERHOOD AND THE SENATE AREN'T/SHOULDN'T JUST BE FOR NON DISABLED PEOPLE 😭😭😭

Tammy Duckworth is a gangster. 49. Double amputee. Pregnant. Senator. AND ALL WHILE WRANGLING A TODDLER. Keep it up, girl!

And if you somehow need yet another reason to stand up and cheer for this powerhouse of a lady, here’s what she said during the recent government shutdown in response to Trump’s accusation that Democrats were putting “unlawful immigrants” ahead of the military:

“I spent my entire adult life looking out for the well-being, the training, the equipping of the troops for whom I was responsible. Sadly, this is something that the current occupant of the Oval Office does not seem to care to do — and I will not be lectured about what our military needs by a five-deferment draft dodger. And I have a message for Cadet Bone Spurs: If you cared about our military, you’d stop baiting Kim Jong Un into a war that could put 85,000 American troops, and millions of innocent civilians, in danger.”

"I will not be lectured about what our military needs by a five-deferment draft dodger." Democratic Sen. Tammy Duckworth responds to President Trump's tweet that said Democrats are responsible for the government shutdown and don't care about the military https://t.co/jbTT3mD8T9 pic.twitter.com/WkGhNjLOji

We look forward to meeting what is sure to be a kick-ass baby come April, Senator Ducksworth.

Tell us what you think about this news @britandco!