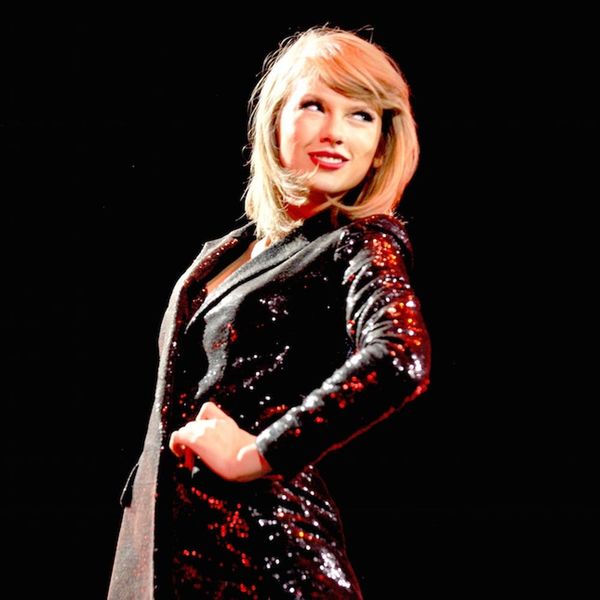 BFFs Taylor Swift and Karlie Kloss do a lot together. They support each other’s work in major ways — Karlie is there to co-star in Taylor’s music videos, Taylor is there to give Karlie catwalk-approved tunes for Victoria’s Secret runway shows. They party together, pose together and bake cookies together. Other than being a supermodel and a superstar, they’re just like you and your BFF.

Taylor performed this weekend at MetLife Stadium for two New Jersey shows during her epic 1989 World Tour and her BFF showed up to cheer her on. Sure, Tay brought her (and Nick Jonas and OITNB star Uzo Aduba annnnd a slew of other Angels) on stage, but it was Karlie’s ‘gram from the audience that had us double tapping. Kloss posted this adorable pic of herself with a *sweet* DIY sign and the caption: “Best. Sign. Ever. #1989WorldTour”

We’re not sure if Karlie made this herself or if she nabbed a creative fan’s totally on-point sign, but either way it’s perfectly punny. The sign is an homage to Tay Tay’s 2014 mega-hit “Shake It Off” and her love of baking. She made the above Fourth of July cake two years in a row (with the help of friends and her hunky brother) and counting.

We know Taylor’s favorite cookie recipe, which she described as “real turning point in my life” — and let’s not forget that Karlie has her OWN line of cookies with Momofuku. Looks like the friends that bake (treats) together, stay together.

What do you think of Karlie’s sign for her BFF? Tell us in the comments below!

Kimberly Wang
Kimberly Wang writes about all things pop culture, tech, style, and beauty. She's a Bay Area transplant and has an MFA in Creative Writing from Columbia University. On a sunny New York day, you can find her hanging out with her mini schnauzer Isabelle Jellybean on a blanket in Central Park.
Glitter
Home News
Glitter Karlie Kloss Taylor Swift