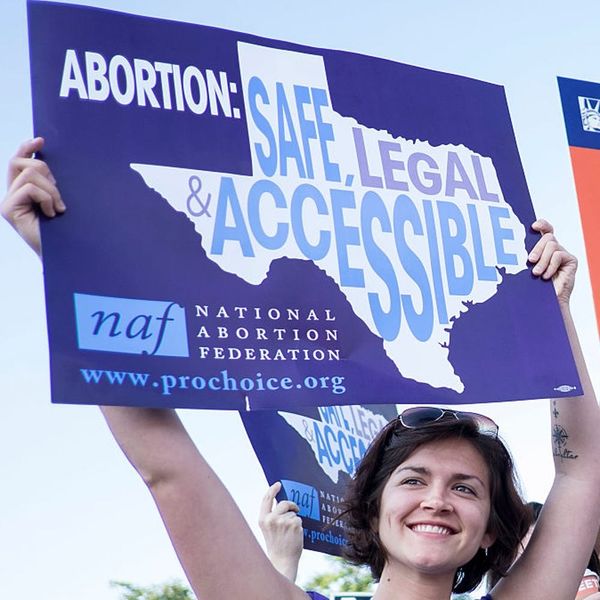 It’s a difficult time to be a person who can get pregnant ( and progressive) in Texas. State Governor Greg Abbott, known for his hardcore anti-choice views, has had a very busy year, lining up new bills that further limit women’s access to safe abortions. A particular bill, from far-right Representative Valoree Swanson, introduces a slew of restrictions including one that will impose an outright ban (even in cases of rape or incest) on one of the safest and most frequently performed types of surgical termination.

Planned Parenthood cites dilation and evacuation as the type of abortion most commonly performed after 16 weeks. Texas’ Senate Bill 8, effective on September 1, will outlaw the procedure completely. But several groups — including The Center for Reproductive Rights and Planned Parenthood Federation of America — are taking steps to fight the bill. Just yesterday, they filed a joint civil action protesting the fact that SB 8 “imposes an undue burden on women seeking second-trimester abortions.”

“In addition, reads the suit, “to the extent that any physician can continue to provide D & E procedures, the ban violates Plaintiffs’ patients’ right to bodily integrity because it would require them to accept unnecessary, invasive, and potentially painful medical procedures, in order to access their constitutional right to abortion.”

In 2015, Kansas was the first state to attempt to enact such a ban. That bill was passed but struck down the next year, before it could go into effect.

SB 8, however, goes beyond simply outlawing D & Es. It also demands that clinics treat aborted fetal tissue in the same manner as human remains, providing a burial or cremation. And it prevents that same tissue from being donated for scientific research. (HB 86, a separate, yet-to-be-passed bill, aims to revoke the licenses of doctors who agree to perform nearly all types of terminations.)

The logic of “tougher abortion laws equals few abortions” has long been proven false. What these kinds of laws actually do is put women with no access to proper providers at risk. Self-induced, DIY abortions (which estimates say over 100,000 women in Texas have already tried) are less hazardous but painful (and illegal). But when pregnant people are forced to resort to medical procedures performed by people other than trained doctors, the situation becomes truly dangerous—and is a violation of constitutional rights. Thanks to protesters, activists, and organizations like Planned Parenthood, Texas has a tough fight ahead.

Are you concerned about access to abortion and birth control in your state? Tell us on Twitter @BritandCo.