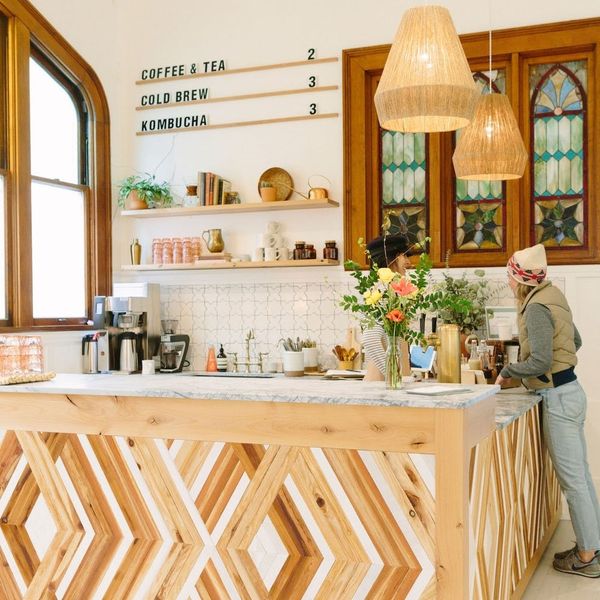 In the bustling Mission District of San Francisco, the city’s dreamiest wellness spot is hiding in plain sight. Walk down the street, blink, and you’ll cruise right past the set of understated doors that leads into The Assembly, a clubhouse for women to network, find inspiration and creativity, and practice self-care. Housed in a former church that was destroyed in the 1906 fire and then rebuilt shortly after as a community space, The Assembly is a manifestation of all your career goals and Pinterest dreams come true, a light-filled urban sanctuary that includes an airy and open co-working space, a large fitness studio, and a lush back patio. And if you had any doubt this place is for you: The downstairs bathroom is usually rocking a Beyoncé-themed playlist.

Opened in January, The Assembly is among the latest in the rise of women-only co-working/community spaces around the country, joining predecessors like The Wing (New York and expanding), The Hivery (Marin County, CA), Rise Collaborative Workspace (St. Louis, MO), Paper Dolls (Los Angeles, CA), and Hera Hub (San Diego, CA; Washington, DC; Phoenix, AZ). It’s no coincidence that these spots have gained popularity in the wake of the 2016 election and the era of #MeToo. Like others, The Assembly was not necessarily created solely to exclude men but was designed specifically to include women, in a world that typically does not.

The history of women’s social clubs dates back to the suffragette movement, with many clubs providing a safe space for women to meet, organize, and advocate for civil and women’s rights. While the recent proliferation of modern women-only spaces is again a reaction to the challenging societal times we live in, it’s also a result of an inspiring growth in female entrepreneurship. As women become more empowered, they, in turn, build things to empower other women. Says co-founder Molly Goodson, “In this space, something that we feel pretty passionately about is the ability of men to come in as invited guests at almost all times. And I think there is a lot of power in men coming into these female-centric, female-forward spaces and seeing what it’s like to be there and seeing what it’s like to feel like you’re welcome to come in and be a guest… and also that it’s not distinctly for you like the rest of the world is.”

The inspiration behind The Assembly came from Goodson’s own experience in the women’s media industry. As a former VP of Content of PopSugar, she spent a lot of time “thinking about the way we talk to women and talk about women, and the spaces we create for them, both digitally and now physically.” After the 2016 election, Goodson shut down the app she had been working on and started working full-time on The Assembly with co-founder Carnet Williams. Her goal was to create a space that she personally wanted to get up and go to every day, a place that brought together health and wellness, community, and productivity. At the core was self-care. When members join, they get a letterpressed card that says “permission granted.” Says Goodson, “We want this to be a place where you have permission here, permission to do whatever you need to do to feel good, to fill yourself back up, to take a break, to take a breather. So when you do go back into the world — whether that’s back to your nine-to-five job or back to the family you’re raising — you’re refueled and revitalized by the time you spent in the space.”

Goodson and Williams worked with the couple behind the infamous Joshua Tree House, designers Sara and Rich Combs, to tap a number of local female artists and makers to bring the space to life. The main entry and door to the fitness studio boasts a huge neon piece by Oakland-based artist Meryl Pataky. Design workshop Fire on the Mesa built out the kitchen area, and third-generation woodworker Katie Gong created many of the custom wood furnishings. Aleksandra Zee’s signature woodworking designs grace the coffee and kombucha bar counter in the main room. Artist Heather Day’s paintings were created on-site to visually capture the essence of the environment. Hand-painted messages by fine artist Jen Mussari are found on various walls, including a large sign in the fitness studio that says, “Put your hair up. Let your hair down. Do whatever you want with your hair,” a quote from Goodson to remind members that The Assembly is a judgment-free zone. In addition to providing the design aesthetic, these artists also represent the ethos of the space — a group of talented women with different backgrounds who are using social media and their platforms to empower themselves and their careers as well as to promote, support, and help one another. The Assembly’s opening weekend featured a panel of these artists discussing how they are making their way in the world.

Daily programming currently includes everything from catered lunches to hip-hop classes to acupuncture to nail art. One of the most popular events is a monthly sound bath, which usually has a waitlist. The Assembly aims to provide a space where people can be surrounded by a community that allows them to feel comfortable asking questions and try things they might not normally try. It’s a place that helps people find out what makes them feel healthy because “healthy” varies from person to person. Goodson says, “I promise anything you do within these walls, we’ll take care of you. For us, it’s about the exploration, the curiosity.” Membership costs $250/month and gives you access to all the events, but day passes and ticketed events are available to non-members as well.

The Assembly plans on ramping up their evening and weekend activities, including adding Sunday brunches to continue to create a social environment where people can just hang out, have a conversation, and meet other people. “It’s been amazing to watch when you give people permission to talk to the person sitting next to them at a table, they will. In a coffee shop, we’re just trained to put our blinders on. And you tell them that they can [talk to each other], and they will.”

In the future, Goodson would love for The Assembly to expand and reach beyond the physical walls of the building, to empower people to find a sense of adventure in the world together, to help people get out and experience new things, and to encourage people to engage with the community. It’s fitting for a place that was named after the fact that it started in an assembly-use building, a location designed to gather people. “You walk in here and you can feel like this is a place of community. It’s a place for coming together, and whether you’re assembling here or assembling to go out on a hike or assembling in a different city or around the shared sensation of wanting to take care of yourself and others, assembly can happen anywhere.”

Where are your favorite places to network and feel inspired? Tag us on Instagram @BritandCo.