The Best 4th of July Fireworks Around the Country 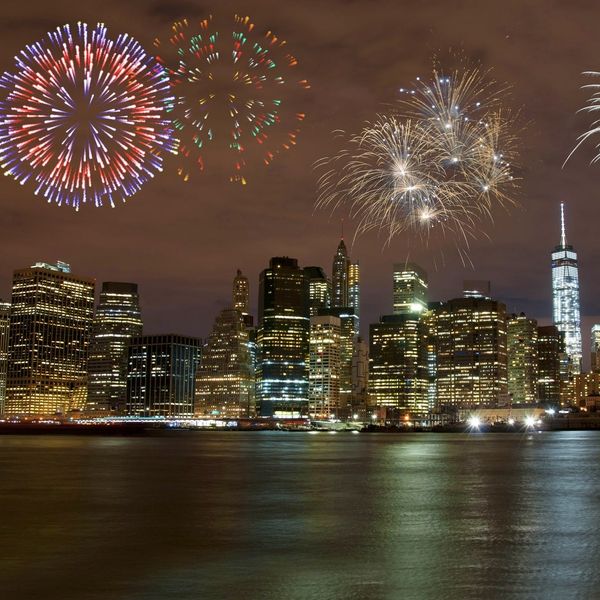 Every July Fourth, we celebrate America’s Independence Day with dazzling shows of fireworks. It’s a tradition as old as our nation; in 1776, Founding Father John Adams wrote a letter to his wife, envisioning the day to be commemorated with "Pomp and Parade" and "Illuminations from one End of this Continent to the other from this Time forward forever more." We’ve had over 200 years to take Adams' suggestion to heart, supersizing the pyrotechnic festivities by adding choreography, live music, and more explosive action. Click through the slideshow to see some of the most spectacular shows in the country.
Macy’s Fourth of July Fireworks, New York, New York: The Macy’s Fireworks Spectacular, the largest in the nation, is a 25-minute pyrotechnics show with star-studded performances (this year, singers include Kelly Clarkson, Blake Shelton, Ricky Martin, and Keith Urban), watched by three million spectators. The fireworks will be launched from the Brooklyn Bridge and barges on the East River. The New York Marriott at the Brooklyn Bridge is walking distance to the waterfront, perfect if you want to nab a place to stay and watch the show over the entire Manhattan skyline.
Boston Pops Firework Spectacular, Boston, MA: A fighter jet flies over while the “Star Spangled Banner” kicks off the 20-minute show along the Charles River, which is accompanied by cannon fire and live music from the acclaimed Boston Pops. This year, Rachel Platten, Indigo Girls, and Rita Moreno are also headliners.
Big Bay Boom, San Diego, CA: San Diego definitely brought the boom in 2012, when the city accidentally set off all of their fireworks at once in a brilliant 15-second show that was supposed to last 18 minutes. But the display is always spectacular, as fireworks are launched from barges around the Bay — Shelter Island, Harbor Island, Embarcadero North, Seaport Village, Embarcadero South Marina Park, and Coronado Ferry Landing. For waterfront views, check out the Coronado Island Marriott Resort & Spa; you’ll be able to catch the show from the pier without dealing with all the crowds downtown.
Georgia World Congress Center Authority (GWCCA) Fourth of July Celebration, Atlanta, GA: This year's fireworks show is moving from Centennial Park to International Plaza and includes family-friendly fun and a performance by R&B quartet After 7 performing with J-Fly and other musical guests.
Wawa Welcome America, Philadelphia, PA: The birthplace of the US celebrates with a seven-day festival that concludes on July 4 with a free concert — this year, the Philly Pops will be performing along with Pitbull and Tony- and Grammy-winner Heather Headley. Plus, the grand fireworks display will have a soundtrack dedicated to love.
National Mall Fourth of July Celebration, Washington, DC: Nothing is more patriotic than spending July 4 in our nation’s capital, watching fireworks light up the sky over the Lincoln Memorial. Go early and grab a spot on the National Mall (just a short distance from JW Marriott Washington, DC if you’re traveling from out of town and need a convenient place to stay) for an All-American experience.
July Fourth Celebration at the Pier, San Francisco, CA: There are activities and free live music in the afternoon (in addition to the usual dining, shopping, and attractions at Fisherman’s Wharf) before fireworks are set off over the water near the famous Pier 39. Several companies also offer cruises on the bay for people to get up close and personal with the fireworks.
Addison Kaboom Town, Addison, TX: This small town north of Dallas knows how to throw a big party. On July 3, 500,000 people (the city’s population is just over 15,000) head to celebrate the day with a carnival, aerobatic air show, and the biggest pyrotechnic display (using thousands of individually handmade fireworks) in the Dallas-Fort Worth area. (Photo via Town of Addison)
July Fourth Fireworks, Nashville, TN: After a day of free live music, viewers get to enjoy an over-the-top fireworks show that is choreographed to the Grammy award-winning Nashville Symphony. The lineup includes Lady Antebellum, Chris Janson, Lucie Silvas, and Shannon Sanders.
July Fourth Fireworks, Los Angeles, CA: Sprawling La La Land has firework shows all over the city, including Pasadena’s Rose Bowl, the waterfront in Marina Del Rey, Dodger Stadium, outdoor concert venue Hollywood Bowl (where '80s band The Go-Go's will be performing), Disneyland, and famous resting place to the stars, the Hollywood Forever Cemetery (where there will be a movie screening earlier in the evening).
Seattle Cancer Care Alliance Seafair Summer 4th, Seattle, WA: The all-day event takes place in Gas Works Park with live entertainment and All-American games like pie-eating contests. The fireworks show opens with hundreds of white strobes floating on the water before the full display is launched over Lake Union.