The BritList: 20 Meme Halloween Costumes You Need to See 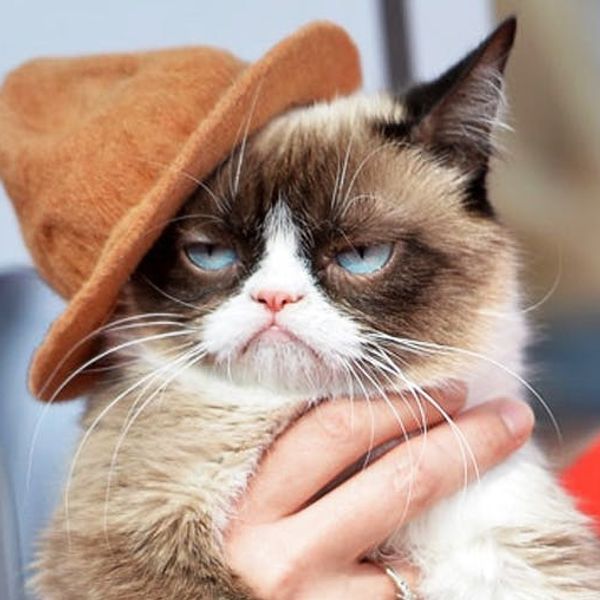 It’s finally HALLOWEEN! And for this extra special edition of the BritList, we are here to wish you a very happy Hallow-meme! That’s right. It’s MEME time — just don’t blame us if this inspires you to completely change your costume at the last minute ;)

First up, the meme of all memes: Grumpy Cat. This chick perfected the makeup for this costume, and that signature frown of grumpiness. So good. (costume via @sugarpill)

This dude is ON point! The posture, the facial hair, the sadness — it’s all there, and it’s beautiful. (costume via Sad Keanu)

If you don’t know what this is in reference to, we’d like to introduce you to our very good friend: The FREAKING INTERNET! (costume via Twisted Sifter)

Some would argue that Keyboard Cat is THE original cat meme. Whether you agree with that or not, this costume is a solid option. (costume via Random Night Out)

If you haven’t seen the Tumblr devoted to photoshopping Steve Buscemi’s eyes onto chicks, you need to… now! To turn yourself into a chick with Steve Buscemi eyes, simply download this printable mask and you’re good to go. (costume via Eye Suck Ink)

The selfie to rule all selfies makes for a great topical costume. You should obvs be prepared to take a lot of selfies with everyone that sees you. (costume via @lifeaccordingtokath)

Is it hot dogs or legs? (costume via The Chive)

Just wow. The execution of this costume is insanely accurate. (costume via Flickr)

McKayla Is Not Impressed

Antoine Dodson (aka the dude from the Bed Intruder video) created and marketed a costume that lets you BE Antoine Dodson. How’s that for meta? (costume via Eur ThisNThat)

What do you call a dumb chemist? BORON! #lolz (costume via Smosh)

Deal with it sunglasses are real, and this costume couldn’t be simpler! (costume via The Awesomer)

I mean, this monkey’s got mad style. (costume via Brooke’s Blog)

Bend it like… that gigantic iPhone. (costume via Cult of Mac)

It’s pretty awesome when something that’s for a good cause becomes an Internet sensation. Pay homage to the ice bucket challenge by DIYing this costume with tulle, a bucket and aluminum foil ice cubes. Or, you could go the extra mile and dress as your fave celeb doing the challenge. (via Brit + Co)

Pharrell in His Hat

This crass badger doesn’t give a… ;) (costume via Costume Shop)

Add a pop culture twist and add a Bella to this mix! (via Random Night Out)

And finally, ERMAHGERDDDDDD! (costume via Mutual Weirdness)
Anjelika Temple
As Co-Founder and Chief Creative Officer of Brit + Co, Anjelika Temple brings her voracious consumption of all things creative and colorful to DIY projects, geeky gadgetry finds and more. When she's not DIY-ing her heart out, you'll find her throwing dinner parties with friends or adventuring with her husband David, their daughters Anokhi and Indira, and their silly dog Turkey.
BritList
Halloween Costumes
BritList Halloween Halloween Costumes