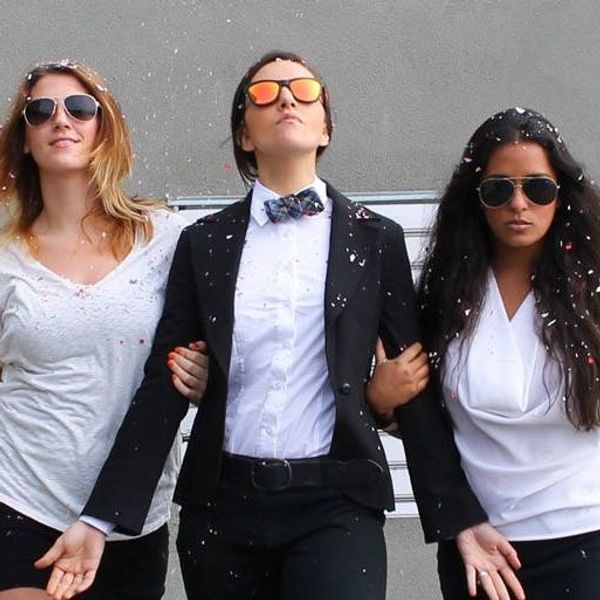 We’ve shown you dog costumes, DIY costumes, and couple costumes. Now it’s time to make our predictions about the most popular costumes you might see this year based on all of the best memes and trends from 2012.

We know that there are dozens, but we chose our top eight to re-create in costume form. Turns out, they are all pretty simple to do yourself! We’ve included our “get the look” for each outfit below. Keep an eye on the streets this year — we guarantee you’ll be seeing some of these around.

As we all know, the Hunger Games was one of the most epic movies from the last year, and its leading lady, Katniss, is one chick you don’t want to mess with. To re-create this look, you’ll need a serious stance, leather jacket, t-shirt, dark pants (cargos would work, too), boots, a bow and arrow, eyes of fire, and of course a mockingjay pin.

2. McKayla is Not Impressed

The meme of all Internet memes, McKayla Maroney is the U.S. gymnast that appeared “not impressed” during the Olympic medal ceremony. This shot of her was then cut and pasted all over standard photos across the web and inspired all kinds of blogs and videos that followed suit. To re-create this look, find a track jacket, a medal, a small bouquet of flowers, a white 90s-esque SCRUNCHY (we used a sock!), and of course, a sourpuss face.

Oh Snooki. Gotta love her. Our favorite cast member from the Jersey Shore ended up pregnant this year (was anyone really surprised?). And given that there are now even dog costumes of Snooki, we knew we had to create a Pregnant Snooki costume as well. This look is pretty simple. Throw on tons of eyeliner and bronzer, add a dab of pink bubblegum lip gloss, and dress in leopard print everything. You can create a nice baby bump with an inflated balloon under your dress. Oh, and the hair streaks are optional but we think they totally make the look come to life. GTL for life!

Who doesn’t love Princess Kate? While the royal wedding happened back in 2011, Kate and Will haven’t stayed in the spotlight ever since. Plus, who doesn’t want to be a princess for Halloween!? To re-create, dress in a pencil skirt and peplum top, and add a hair fascinator, gloves, and a small clutch. Don’t forget that Kate keeps her makeup very soft and always wears an effortless smile.

This year, everyone’s favorite 90s girl band, the Spice Girls, reunited at the London Olympics and we definitely took note. This group costume is a punny take on the Spice Girls, using literal “spices” printed on t-shirts. To do this, just have each of your friends wear a white tee or tank with iron-on transfers of spice jar print-outs. Here’s a short tutorial on iron-on transfers if you need one.

Whether you’re a democrat or republican, you have to admit that Mitt Romney’s “binders full of women” quote was pretty epic. It inspired hundreds of thousands of people to create Facebook pages, blogs, and more minutes after he uttered the words. Stay on trend this Halloween by taking the phrase to a new level — a group costume. For this one, we got two sheets of poster board, covered them with blue paper, used mason jar lids as rings, and attached cardboard handles on the inside so that you can walk around with your favorite lady friends all night long and actually appear as though you are “in” the binder. Note: the Five Star logo is optional.

It’s the song that the radio never stopped playing, that your friends never stopped singing, that we re-created in emoji form, and that can never get out of your head. ‘Call Me Maybe’ is definitely the pop breakout hit of the year and Carly Rae Jepsen has become a star because of it. We re-created her cover album look for this costume using clothes we already had lying around the closet: denim cut-offs, a whimsical top, white stockings, and neutral high heels. We finished the look with two important accessories: a fake phone and BANGS. Lots. Of. Bangs.

Psy, the star of Gangnam Style, may currently be the most popular music artist in the world. The song has been at #1 for weeks, the YouTube video has over half a billion views, and everywhere I look, people are jumping around like they are riding invisible horses. This one might be seen the most this Halloween, and so we knew we had to re-create it. To dress up as Psy, just wear a suit (or pants with a blazer) and bowtie. You’ll need black sunglasses and backup dancers to really bring out the Gangnam Style, though we think you could rock it solo so long as you learn at least a few moves from the video.

Missing from this list are Pinterest, Big Bird and 50 Shades of Grey… and what else? Let us know in the comments below!