The Scientific Reason You Should Keep Taking All Those Selfies 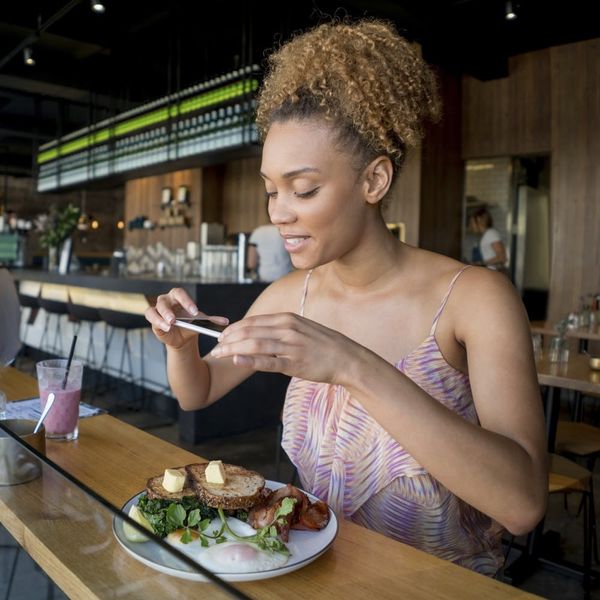 We all have that one friend that scoffs at us for taking pictures instead of living in the moment — whether we’re Instagramming a pic of our double-double fudge bar Frappuccino or Snapchatting our spontaneous summer art gallery or national park adventure. Well, thanks to a new study published in the Journal of Personality and Social Psychology, we finally have a scientific reason for why we take so many pics at events: It actually makes us enjoy them more!

To figure out whether people who take photos of their experiences enjoy themselves more or less than people who don’t, researchers from Yale and the University of Southern California conducted nine experiments with over 2,000 participants. In these experiments, the scientists asked the participants to partake in an event — from eating in a food court to taking a touristy bus tour — and either take photos of their experiences or simply enjoy them as is, in the moment.

In almost every case, the people who took pictures self-reported that they enjoyed the activity more than those who abstained from meticulous photo taking. Furthermore, the photo-takers reported that they felt more engaged during their activity. This was backed by more than just their self-reported surveys too. In one experiment the participants took a self-guided tour of a museum exhibit and wore glasses that tracked their eye movement. Looking at the data from the glasses, the scientists confirmed that those who took photos during the tour spent more time examining the artifacts — thus, they engaged longer and more fully during the outing.

A Word of Caution

Although people who took photos of their experiences were statistically happier and more engaged, there were a few instances when taking photos didn’t add to the participants’ overall enjoyment of the event. When the participants were already actively engaged in the experience — AKA they were already fist deep in glitter during a DIY project — taking photos didn’t really affect their enjoyment of the activity. Similarly, when photo-takers had to handle bulky and/or unwieldy camera equipment, the act of taking photos did not make the experience more enjoyable.

In fact, there were even times when having to take photos made the experience worse for the participants. In one experiment, the participants went on a virtual safari and saw a pride of lions attack a water buffalo. Due to the graphic and gruesome nature of this event, photo takers actually reported lower levels of enjoyment than those who just witnessed the barbaric (and yes, totally natural) encounter — not that we blame them.

Although there are certain instances when taking photographs at a concert, pool party or any other gathering could actually make you enjoy it less, for the most part, snapping pics actually helps you appreciate the activity more. So take no stock in the haters that say you aren’t living in the present — science says taking an awesome Instagram just might be the key to having a great time this summer.

Do you enjoy activities more when you’re taking pics? Let us know on Twitter by mentioning @BritandCo.

Ashley Macey
Ashley Macey is a lifestyle freelance writer who loves all things fitness, wellness, and creativity. When she's not exploring her home in the Pacific Northwest with her dog Max, you'll probably find her curled up with a good book and some hot tea. Follow her daily jaunts on Twitter.
science
Home News
science social media study