These “Male Supremacist” Organizations Were Named Hate Groups by SPLC 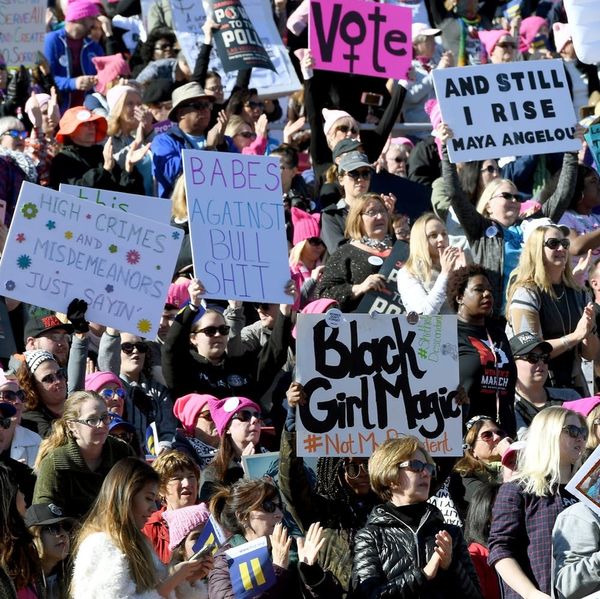 Since the months leading up to the 2016 election, hate groups around the country became more emboldened. Some younger Americans saw the KKK parading openly for the first time in their lives after members in North Carolina marched in support of Trump following the election; hate crimes against Muslims surpassed levels not seen since 2001, and women around the world marched against the president’s sexist remarks and many alleged sexual assaults.

The Southern Poverty Law Center (SPLC), a group that tracks hate groups and works to fight bigotry, has long been researching white supremacist groups like the KKK, and has been keeping close tabs on the so-called alt-right as it came to prominence with the rise of Trump. Each year the SPLC releases a report called “The Year in Hate,” which describes different hates groups’ activity, tracks them on a map, and adds any new groups that have emerged as hate groups. The SPLC released its 2017 report this week, and for the first time ever included two groups it is calling “male supremacist.”

The two groups added are A Voice for Men, a non-profit organization based in Houston, whose self-described mission is: “T]o provide education and encouragement to men and boys; to lift them above the din of misandry, to reject the unhealthy demands of gynocentrism in all its forms, and to promote their mental, physical and financial well-being without compromise or apology;” and Return of Kings, a Houston-based website that runs articles such as, Why Human Resources Hates You (But Not Her) and 27 Attractive Girls Who Became Ugly Freaks Because of Feminism. Additionally, the founder of Return of Kings, Roosh V, has advocated for rape to be legalized on private property, according to the SPLC report.

The SPLC’s new report states that “The vilification of women by these groups makes them no different than other groups that demean entire populations, such as the LGBT community, Muslims or Jews, based on their inherent characteristics.”

Keegan Hankes, an analyst for the Southern Poverty Law Center, tells Brit + Co over email that “Male supremacy is an on-going problem in the U.S. that has largely been organized around several toxic online communities.” There’s also a connection to Trump. “First candidate Trump, then President Trump’s open contempt for so-called political correctness has emboldened male supremacists, and the entire radical right, to be even more outspoken with their bigotry,” Hankes adds.

Male supremacy can take various forms, the SPLC notes. Different strains of male supremacy range from so-called men’s rights activists (MRAs), who market themselves as being interested in the rights and welfare of men (dad’s custody issues are often a go-to for this camp), all the way to “men going their own way,” which refers to men who want to live completely separate from women. Another common type of male supremacists are “pick-up artists,” who degrade women and think they are inferior but are constantly in the pursuit of getting women to sleep with them.

Male supremacists are cause for serious concern. Hankes says that “Male supremacists perpetuate propaganda that depicts all women as genetically inferior and manipulative, and as participants in a malicious project to destroy men. This material exacerbates young, white, male grievance, a known predictor of mass violence. ”

Alarmingly, there are also strong links between the so-called MRA movement and the white supremacist “alt-right” movement, members of whom have been violent and allegedly homicidal on numerous recent occasions. “Male supremacist communities also lead many to graduate to the alt-right, and white nationalism more broadly,” Hankes says.”

According to the SPLC’s entry on male supremacy, there is “a tight overlap exists between the “alt-right,” white supremacist and male supremacist circles, which feed each other’s narratives of the dispossession and oppression of white men, which is blamed on minorities, immigrants and women.” Both MRAs and members of the “alt-right” are openly hostile to feminism.

The SPLC also says that misogyny is a core tenet of the “alt-right,” and adds that male supremacy can be thought of as something of a “gateway drug” to the white supremacist alt-right movement.

Male supremacy and the overlap it has with the often violent “alt-right” certainly poses a threat. As president Trump and his administration continue to push policies that are hostile to women, LGBTQ+ people, and people of color, anti-feminist and white supremacist groups have also become emboldened. Now that the SPLC recognizes two male supremacist organizations as hate groups, more awareness will hopefully be raised about their beliefs, actions, and the threats they pose.

What do you think of the SPLC’s new report? Tell us on Twitter @BritandCo.