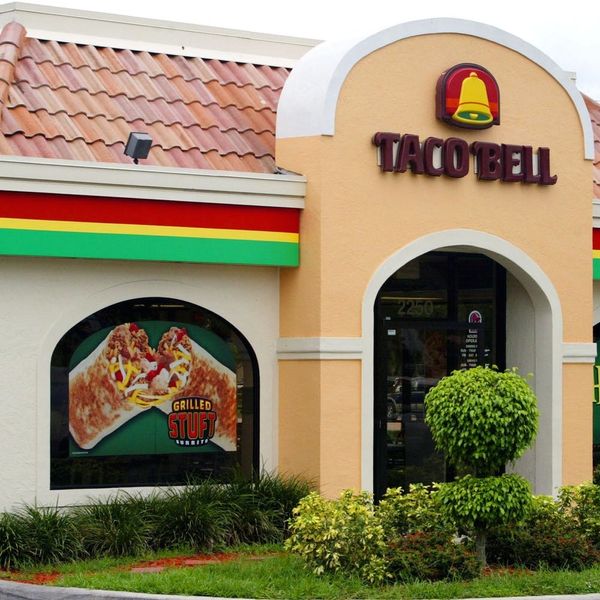 As more and more brides decide to forgo tradition on their big day, the idea that a dress has to be white and classic to be perfect for a walk down the aisle has gone out the window. From airbrushed gowns to colorful options galore, we’ve seen some seriously bold, quirky looks in recent years, but bride-to-be Diane Nguyen just outdid them all. The 31-year-old just crafted her own stunning DIY dress, and it’s made out of (are you ready for this?) Taco Bell burrito wrappers!

Nguyen got the idea after Taco Bell unveiled its Love and Tacos contest last month, which asked couples to share what kind of role the fast food chain plays in their relationship for a chance to win an all-expenses-paid trip to Las Vegas (complete with an unforgettable wedding ceremony at the Taco Bell Cantina). Nguyen decided to enter, and girl went all out.

Sharing her surprisingly beautiful creation on Instagram, Nguyen quickly became a fan favorite. Her adorbs, pun-filled submission didn’t hurt any, either: “It’s time to spill the beans,” she wrote. “We have been engaged for four years, and together for 10. Taco Bell has been there through the years, from the after school runs, to late meals after work (or a night of partying). Our love for each other is as cheesy as a quesadilla.” Love it!

Day #2 for voting is upon us!! Here is a better look at the #wrapperdress for the #loveandtacoscontest! Spread the word! Like, share, tweet, reddit, tattoo a link on your forehead...Let's win it together!! :) https://www.tacobell.com/loveandtacos/161600 (Link also in bio)

As for the gown itself: “The wrappers were donated to me by a friendly manager at one of their locations,” Nguyen told Delish. Using a hot glue gun, the DIY Queen said that it took six hours for her to stick ’em onto an old corset and fashion the frock’s unique shape.

It’s time to spill the beans. We have been engaged for 4 years, and together for 10. Taco Bell has been there through the years, from the after school runs, to late meals after work (or a night of partying). Our love for each other is as cheesy as a quesadilla. We’re nachos getting married, it’s going to be a Las Vegas tacover. Lettuce celebrate our love at the Taco Bell Chapel in Vegas, cuz we are ready to guac and roll. #loveandtacoscontest #tacobelle #burritodress #iloveyou Link in the bio!! https://www.tacobell.com/loveandtacos/161600

Nguyen also revealed that she would totally rock her now-viral dress to her ceremony, but admitted that it’s “a bit awkward to wear, so I think a replica made with fabric would be more comfortable.” As for her fiancé, 32-year-old Nick Ward, who popped the question while the couple was waiting in line for an ’80s prom-themed bash, the bride-to-be said he’d “sport a Baja Blast colored suit and have a wrapper bow tie to match.” She wants her bridesmaids in on the fun, as well, saying, “They should definitely be dressed in all of the hot sauce colors.”

Wow. All we can say is #WeddingGoals.

Would you ever wear a wedding dress this quirky? Tweet us @BritandCo.