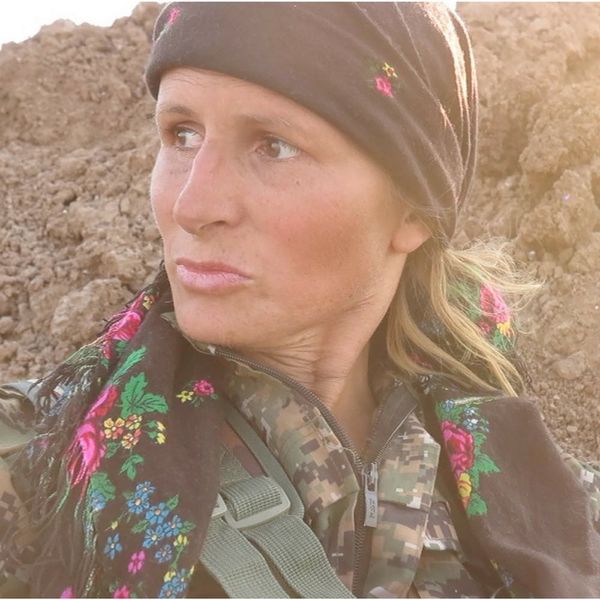 We have read about the Syrian war and seen it in the news, but the numbers are staggering: More than five million men, women, and children have now fled the country. It’s been over seven years of devastation as bombs light up the sky, but there are legions of foreign volunteers fighting against ISIS in Syria — among them, a group of women fighting with on-the-ground Kurdish defense forces known as People’s Protection Units, otherwise known as the YPJ.

It was 2014 when a Canadian former model named Hanna Bohman found herself joining the all-women YPJ after a near-fatal motorcycle accident. The Canadian government doesn’t condone its citizens joining overseas militias; however, Bohman estimates she’s one of a handful who has ignored this to go ahead and join in on the fight.

As Bohman puts it, she was inspired to go there in the first place by the women already on the front lines. Bohman explains, “It became clear to me that if our governments weren’t going to do the right thing, so I would have to.”

With only four hours of training and no prior military experience, Bohman was thrown directly into the deep end of combat.

The YPJ’s mission is to liberate women, not just from ISIS but from an oppressive patriarchy, and Bohman’s fight as a foreign volunteer became the epicenter of the 2017 documentary Fear Us Women, which shares her story in the field. The 27-minute short film is a production of RYOT Films, helmed by Academy Award-nominated director David Darg and executive producer Olivia Wilde.


The film shows how the women of the YPJ are currently fighting in some of the most dangerous combat zones in the world — and how they’re feared by their enemies. Through Bohman, we’re given an unprecedented perspective into the conflict from the front lines.

“Too often all we see are hopeless images coming out of Syria and Iraq,” says David Darg, director of Fear Us Women. “These women have become so passionate about equality that they are willing to die for their cause. If women can defeat ISIS, they can defeat anything; no obstacle is too great.“

Bohman hopes that people will gain a better understanding of what is happening in Syria after watching the documentary, and that the film will inspire viewers to “take [the conflict] seriously; there are millions of people dying.”

Will you see Fear Us Women? Tell us on Twitter.

Amanda Scriver
Amanda Scriver is a passionate storyteller and body image advocate based out of Toronto, Canada. When she isn't writing for various publications, she finds time to Keep Up With The Kardashians while partaking in life's greatest pleasure: the chip buffet. Don't ask her what her favorite restaurant is, it's complicated
Empowering Girls
Current Events
Empowering Girls Ladies First