This Is Us Season 1, Episode 12 Recap: The Big Day 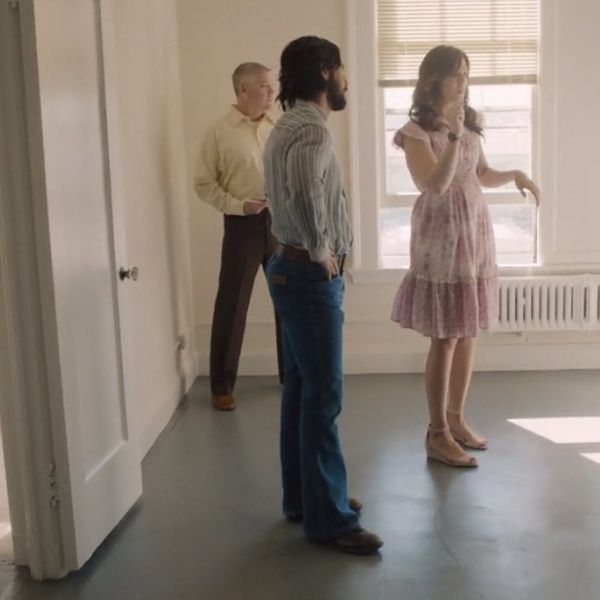 Each week since the start of This Is Us, we’ve been getting flashbacks to early moments in the lives of the Pearson family, from Jack and Rebecca’s first meeting to the years of squabbles between three kids. Even though we’ve already had an episode about the birth of the “Big Three,” (see: the pilot), this episode takes us back even further, before the actual birth but after the Froggy’s bathroom sex and sonogram reveal. What’s more, it’s an episode that, for the first time, is a complete prequel/flashback. It doesn’t toggle between the past and the present. It stays solely in the 1980s, which is good, because not only is there a lot of story to take in but emotions are running high in this episode, folks. Grab your tissue box and read along accordingly.

The episode takes us back to August 31, 1980: a day that hasn’t been seen since the premiere. A pregnant Jack and Rebecca are picking names for their baby and listening to Stevie Wonder. “I love being pregnant,” Rebecca says when she notices how big her breasts have become. “I hate being pregnant,” she decides later when she can’t go to the bathroom or put on shoes by herself. (I guess if you were waiting for three kids to come down the “water slide” you’d be cranky too.) Anyway, Miguel calls Jack to wish him a happy birthday, because best friends always remember even when your wife forgets because she’s “gone to the darkside.”

Rebecca and Jack end up arguing, enough so that she basically throws him out of the house. “Thanks again for the bathroom sex at Froggy’s, Jack!” Rebecca yells as he leaves. When she looks at the calendar, she realizes she’s forgotten Jack’s birthday. Needless to say, Rebecca feels like absolute crap. And, of course, by the time she tries to get him back, Jack’s already gone. So Rebecca takes matters into her own hands (and feet, thanks to duct-taped flip-flops) and decides to cook him a birthday cake. Only problem is, they’re seriously low on everything cooking related, so she walks to the store. Honestly, given that she’s pregnant with THREE KIDS, just leaving the house to make the trek would have probably been enough.

Rebecca finds a store promising “liquor and more,” except the “more” part isn’t really anything other than the barest amount of convenience store items. After exchanging some heated and hormonal words with the cashier, Rebecca breaks down and buys a banana muffin and some Twinkies. She is MAKING Jack a birthday cake, dammit! Oh yeah, she also buys him a Terrible Towel. This is important.

Miguel takes Jack to golf, and he’s… less than impressed. Jack may be the model husband, but he’s just not interested in golf. Or being away from his wife. He says as much, especially when the guys at the golf shop start ragging on him about how much he’s going to hate being around his wife when the triplets arrive. Can we ALL have husbands like Jack Pearson, please? Please? By the time Jack comes home, Rebecca has been talking to the babies like the epitome of a perfect mother, and we’re all reaching for the tissues. “I can’t wait to make Halloween costumes with you,” she says and we cry. Or maybe it’s the line “I’m probably not going to be the perfect mom you’re dreaming about” that does it. You’re going to be perfect, Rebecca. In your own way. Of course, Jack manages to get this all on video, because he is literally the perfect husband. Ever.

Does it get any more perfect than these two? Hint: the answer is no. #ThisIsUs pic.twitter.com/nKsuOu14UZ

JOE, THE HERO WE ALL DESERVE

One of my favorite things about This Is Us is that it’s able to show smaller, personal character beats that exist within this world without compromising its original story. For example, we didn’t know anything about the nameless guy who worked at the fire station, the one who brought Randall to the hospital during the premiere. In this episode, we pulled back the curtain on his life to find out his name is Joe (Brian Oblak), and he’s having trouble with his marriage, and nothing he does seems to help. At his wits end, he decides to go to confession, and asks for a miracle. He gets his miracle: A baby is left at the fire station, and we see a brief shot of young William walking away.

Joe brings the baby back to his wife and explains this is the miracle he asked for. They grew apart because they couldn’t have kids, and now, look! A wild baby appears, as if it’s been dropped out of the sky! But his wife is upset and says they can’t take the baby, and so a disappointed Joe brings the baby to the hospital.

And finally, we have the story of Dr. K (Gerald McRaney). In the premiere, we learned about how he lost his wife, Caroline, but this episode dove into his life even further by showing us how he was coping (spoiler alert: badly). He’s holding onto the past (literally and figuratively) and he can’t seem to let go, which is hurting him in a lot of ways. He turns down company, his son is worried about him and he’s talking to his wife half the time as if she’s still there. On the day that Rebecca goes into labor, he’s visiting his wife’s grave. He admits he doesn’t know how to keep going, and doesn’t know if he even wants to. (Reach for the tissues again.)

All of this brings us to the moment we were first introduced to the Pearsons in the premiere: Jack wearing his “birthday suit” and the Terrible Towel, because “tradition is tradition.” And then we get a montage of everything we saw in the premiere, from Rebecca’s delivery, to Jack meeting Joe right after he drops off Randall, to Dr. K’s confession about his wife and subtle urging to take the third child to replace the one Rebecca lost. We do see the aftermath of the convo where Jack tells Rebecca what happened, and damn. That hurts.

The end of the episode allows everyone to start over. Joe talks to his wife about what happened and starts over — literally. Dr. K moves on and throws out all of his wife’s stuff, and has dinner with a friend after all and starts over, in his own way. And the Big Three? They’re enjoying being a family. (And watching that video from their dad’s birthday.)

Next week, it looks like we’re back to the present day, which is good because I’ve been seriously missing some grown-up Pearson time.

Andrea Towers
Andrea Towers is an entertainment writer whose work has appeared in Bustle, Variety, Paste Magazine, Mashable, and more. She loves celebrity life, coffee, superheroes, and crying into her wine glass over really good programming. She lives in New York, and was previously a writer and editor at Entertainment Weekly. You can find more of her pop culture ramblings and thoughts on Twitter at @_atowers.
Halloween
Pop Culture
Halloween TV Recaps