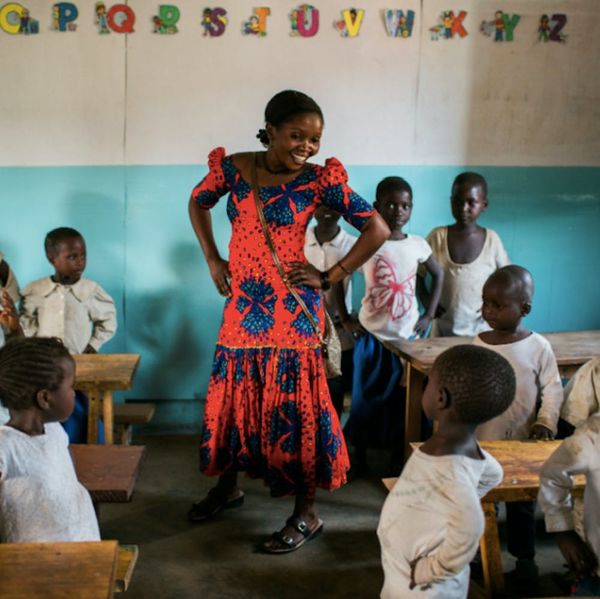 Since her early 20s, activist Cassandra Lee has divided her time between Los Angeles and places like Congo, Sudan, Uganda, Syria, and Iraq. If you know anything about the current state of those countries, you might ask why. Each place has held a steady spot in the headlines (some of them for decades now) for having a reputation for conflict, violence, and danger. Refugees from these countries have left their homes en masse, hoping to rebuild their lives in Europe or North America (though with the election of Trump, refugee immigration to the US has come to a startling halt).

Worldwide, there are 65 million people who’ve left their homes, many of them landing in overcrowded refugee camps. But for more still, leaving is not an option. Those are the people that Lee — and the organization she founded, Justice Rising — aim to help. The non-profit was dreamed up with the goal of “disrupting cycles of conflict and combating extremist ideology using education,” says Lee.

Working closely with a country’s education ministry, the organization keeps it local by hiring and training teachers from inside the affected communities. The belief is that through grassroots efforts, widespread political, economic, and cultural change can happen — and according to Lee, it’s working.

Brit + Co: Can you tell us a bit about what Justice Rising does, how the idea for the project was sparked, and how you’ve partnered with local communities to make Justice Rising schools a reality?

Cassandra Lee: Before starting Justice Rising, I had already been living and working in areas of conflict around the world — I was in Southern Sudan during the Darfur crisis, Northern Uganda, the Middle East (where I worked with Syrian refugees), and in North Korea. So much of my time was spent with families and children who had witnessed this devastation first-hand, and I would often sit with them as they told me stories of war, abduction, of being taken away as a child soldier or bride, genocide, and beyond — and it was immediately clear to me that I needed to find a way to take care of children affected by, and displaced by war, so I began to immerse myself in the science and positive effects that education could have. From that, Justice Rising was born in 2015.

It started really small. I cleared out my own bank account for our first school, which was made to educate just under a hundred children in Congo. Since then, we’ve expanded to serving seven schools in that region with over 1,600 students and employing more than 60 teachers and administrators. And we’re constantly growing and finding new ways to support these communities.

You’ve described the goal of bringing a lasting peace to regions devastated by war and conflict as “ambitious”—which is an understatement! I think a lot of people might describe it as “impossible.” But that kind of hope for a better future, while it might seem audacious at first (to borrow a phrase from former President Barack Obama), can also be really infectious. How hard (or not hard) was it to get your fellow collaborators on board to support this idea?

At the beginning, it was quite difficult to get people on board. I was in my early twenties and moving to a war zone. Truthfully, I think a lot of people were scared for me and thought something terrible was going to happen. But over time, and as we began building schools, we started to see the change that I had dreamt of for so long and people started to warm up to the idea — it still seemed a bit crazy, but it wasn’t deemed “unrealistic” anymore because we had this proven success.

Now… it’s quite easy for them to get behind the vision and idea that education is an incredibly powerful tool in transformation. When people start seeing how effective that is on the ground, it’s easier for them to buy into the idea of being apart of changing communities through education.

We’ve all seen the news lately — from the devastating wars around the world to the attacks in Syria or the raids in Eastern Africa — and I truly believe people want to help, they just don’t know how. When we’re able to bring them this idea and say, ‘Here’s how we can be proactive together, and here’s exactly how we’re going to make it happen,’ I think it’s something that people are eager to get behind.

Women and children are the two groups that are impacted most by war — they’re often targets for violence or recruitment as child soldiers — but programs that help these groups have also been shown to bring about the biggest positive changes in a community. What changes have you seen in the communities where your schools have been established?

The situation is bad in the countries that we work in, but for women and young girls, it’s even worse — they’re facing sexual violence and exploitation, constant threats and attacks on their bodies, extreme poverty, and beyond. This is especially dire in the Democratic Republic of Congo, where it really is (statistically) one of the worst places to be a woman or a child today. This all really goes back to the fact that girls and women in these countries aren’t given equal opportunity in education, in employment, and in their communities — therefore, they’re less likely to be able to contribute to society and hold that same sense of empowerment that their male counterparts do.

Often girls in Congo, Iraq, and Syria miss or drop out of school as soon as they get their period, causing further inequality in education. We also implement the UN developed WASH program (Water, Sanitation and Health) in which we teach girls and young women how to stay clean and safe during their monthly cycle, going beyond providing them with the products they need and, instead, educating them on this next step into womanhood. In these courses, our teachers break down the stigma and shame surrounding menstruation.

We’ve found that when you invest in a young girl’s education, you’re instilling confidence in whole communities to make powerful choices, resulting in a reduction in the economic vulnerability of women and girls, an increase in community health, [and] a decrease in sexual assault.

The current political climate here at home paired with seemingly unending escalations of conflict in places like Myanmar, Bangladesh, Syria, Yemen, Congo, and The Sahel (sadly, we could go on) can make the idea of peace appear unattainable. Can you talk about some of your experiences with children in these places and how they’ve demonstrated to your team that education really is a tool for creating lasting peace?

Education really does have the power to create peace, that’s the belief that we built Justice Rising on and we’ve seen it proven time and time again. Underdevelopment leads to conflict, resulting in economic collapse, and further unrest — but by developing the nation’s youth, schooling and education can break this cycle and lead to peace. The schools we build provide at-risk children with a safe haven, allowing them hold onto a sense of normalcy when times get tough. There are so many incredible results — we’ve seen education reduce the chances of young boys being abducted into the army, empower girls with more confidence, lower the chance of rape and early child marriage, improve health for children and future generations, build a bridge to better employment opportunities — the list goes on and on.

Whether it’s lack of opportunity, attention or resources, the impoverished conditions can often yield a class of children than don’t have anything to do, making joining the military more attractive for boys or child marriage/early motherhood the only viable outlet for girls. Education solves for this by providing that stable connection to the community and providing these children with the opportunity to be upwardly mobile and break the cycle of poverty.

War can feel like this problem that is both so big and also so far away but despite that, when you take action (even small ones) against the damage that conflict does, it can make a real difference. What are some of your upcoming projects and how can Americans get involved from here at home?

CL: It’s so true that even just the smallest action can have such a big effect on those in the countries that we work in across the world. At the moment, we’re focused on our April EXPAND campaign which is in response to the emergency contexts and increasing need in areas including Iraq, Syria, and Congo. Anyone can donate here on our website, and any amount counts. Longer term, we’re working towards our Vision 20/20 goal, which is to build 40 schools in war zones by the year 2020.

Do you believe in the power of education to effect change? Tell us about it on Twitter.

Corrina Allen
Corrina Allen is a film + television + travel writer from Toronto. Her journalistic goals include a backstage interview with David Byrne, the fictional character she identifies most closely with is John Wick, and her favorite dead person is Vladimir Nabokov. She never, ever Instagrams photos of her food (just her dog).
Activism
Empowerment
Activism Education Empowering Girls Ladies First