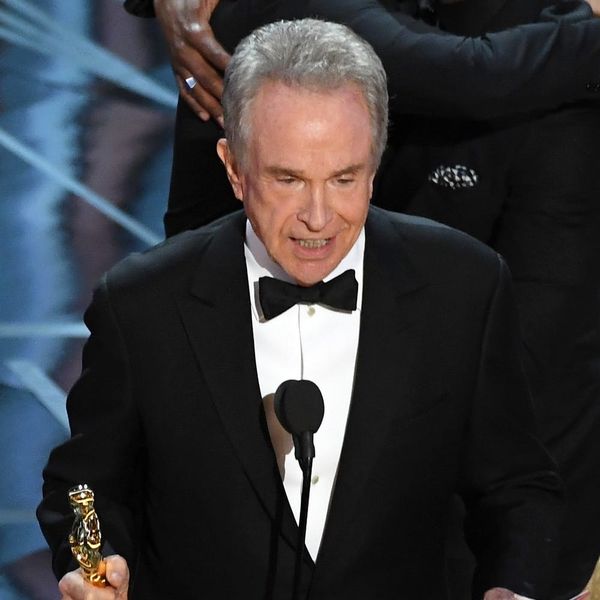 It was just two weeks ago that Adele made jaws around the world drop with her incredibly moving acceptance speech dedicated to Beyoncé. The Album of the Year winner burst into tears onstage, explaining that she truly believed that Beyoncé deserved the award, with Adele even going so far as to break her Grammy in half.

Tonight’s Oscars, while not without its moments (we’re still LOL-ing at the tour bus that got the detour of a lifetime), seemed pretty tame in comparison… UNTIL the award for Best Picture was announced.

Screen icons Warren Beatty and Faye Dunaway took the stage together to present the award, and when the time came to reveal the winner, Beatty took his time. He appeared to be toying with the audience, drawing out the announcement with peeks into the envelope and sidelong glances at his co-presenter that had the audience eliciting nervous laughter.

Wow RT @HawkeyeOnAir: Look at Warren Beatty check the envelope a second time. He knew something was wrong #Oscars pic.twitter.com/gQdw9nztzB

After what seemed like much adieu, Dunaway finally read the winner from the card that Beatty had passed her way for inspection: La La Land. Producer Jordan Horowitz and the rest of the film’s cast and crew had already taken their places onstage and begun to read their acceptance speeches when the awkward truth was revealed in a strange, bizarre, unprecedented turn of events that will forever change the coarse of Oscars history: Beatty and Dunaway had seemingly had a Steve Harvey moment and somehow announced the wrong picture as the best film of the year. GULP.

It was Horowitz who took charge of the disastrous moment, holding up the winning card to the audience and speaking clearly into the microphone to say that Moonlight had actually received the Academy’s top honors. “This is not a joke,” he said. “Moonlight has won best picture.”

As the stunned audience read the words on the card he held up for all to see, Horowitz remained as classy as ever despite any disappointment and heartbreak he must have been feeling, saying, “I’m going to be really proud to hand this to my friends from Moonlight.”

Warren Beatty, who had apparently been given the card for Actress in a Leading Role instead of Best Picture, stepped up to attempt to make some sense of what had just happened for the crowd, saying, “I want to tell you what happened. I opened the envelope and it said Emma Stone, La La Land. That’s why I took such a long look at Faye and at you,” he said to host Jimmy Kimmel. “I wasn’t trying to be funny.”

Once the shock set in, the stunned cast and crew of Moonlight joined the La La Land cast in their rightful places onstage. Director Barry Jenkins, in a mixture of pure joy and total shock, did his best to pull a speech together, telling the audience, “Very clearly, even in my wildest dreams this could not be true, but to hell with dreams! I’m done with it because this is true. Oh, my goodness. I have to say it is true, it is not fake. We’ve been on the road with these guys for so long and that was so gracious, so generous of them. My love to La La Land, my love to everybody, man.”

We don’t know about you, but our minds are 100 percent completely and utterly blown. We don’t even know WHAT to think right now. One thing’s for sure, however: Both very deserving films have forever cemented their place in history after tonight.

What was your reaction to the Oscars mix-up? Share with us @BritandCo.

Nicole Briese
Nicole is the weekend editor for Brit + Co who loves bringing you all the latest buzz. When she's not busy typing away into the wee hours, you can usually find her canoodling with her fur babies, rooting around in a bookstore, or rocking out at a concert of some sort (Guns N' Roses forever!). Check out all her latest musings and past work at nicolebjean.com.
Controversy
Celebrity News
Controversy Oscars