Adele’s Grammy Acceptance Speech Moved Everyone (Including Beyoncé) to Tears 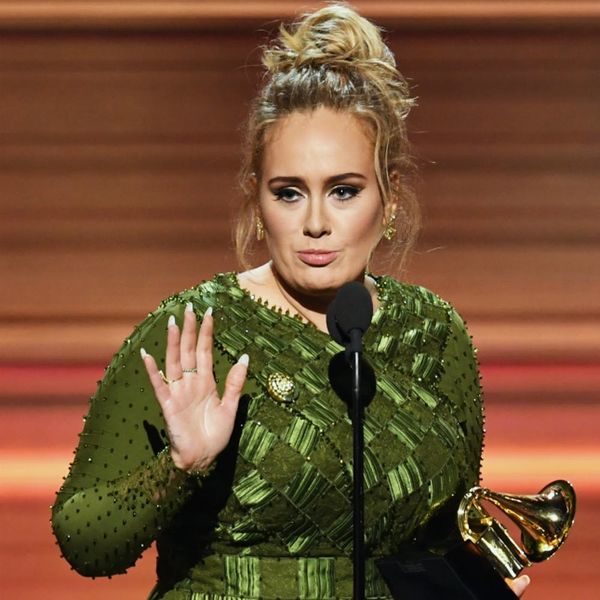 While everyone was expecting Beyoncé to clean up at this year’s Grammy awards (particularly after watching her bring her pregnancy announcement to life), it simply wasn’t to be. When her daughter Blue Ivy wasn’t stealing the show, British singer Adele was cleaning up instead, beating Bey in nearly every single category. By the end of the night, it was clear that Adele was taking home the coveted Album of the Year award, but the singer-songwriter shocked everyone (including award rival Beyoncé herself), bringing us all to tears when she took to the stage to give her second acceptance speech of the night.

Shortly after taking the win for Song of the Year, Adele returned to the stage for her Album win, thanking those who supported her (one HUSBAND included — did girl pull a secret wedding off right under our noses?), before breaking down in tears and explaining that while she was incredibly grateful for the award, she truly believes she does not deserve it. Looking at Beyoncé in the front row, the singer said, “My artist of my life is Beyoncé. And this album for me, the Lemonade album is just so monumental, Beyoncé. It was so monumental and so well thought out and so beautiful and soul-bearing and we all got to see another side of you that you don’t always let us see and we appreciate that… You are our light.”

The singer went on to thank the Queen for the way she makes people feel, especially black women, saying, “…the way that you make my black friends feel is empowering, and you make them stand up for themselves and I love you, and I always have and I always will.”

For her part, Bey was grateful and gracious, saying, “I love you, Adele,” to the singer as she wiped away flowing tears of her own.

Way to be a class act, Adele — you truly are tops.

What was your favorite awards show shocker? Tell us @BritandCo!

Kat Armstrong
Kat has been a writer, social media maven and mom for longer than she's willing to admit. She's also spent time in front of and behind the camera, interviewing celebs, politicians and acting as a producer for fashion and artistic photography shoots. When she isn't writing for various orgs and publications, she's hanging with her kids, husband and French Bulldog, Peter, in Toronto, Canada.
Beyonce
Celebrity News
Beyonce Grammy Awards Music