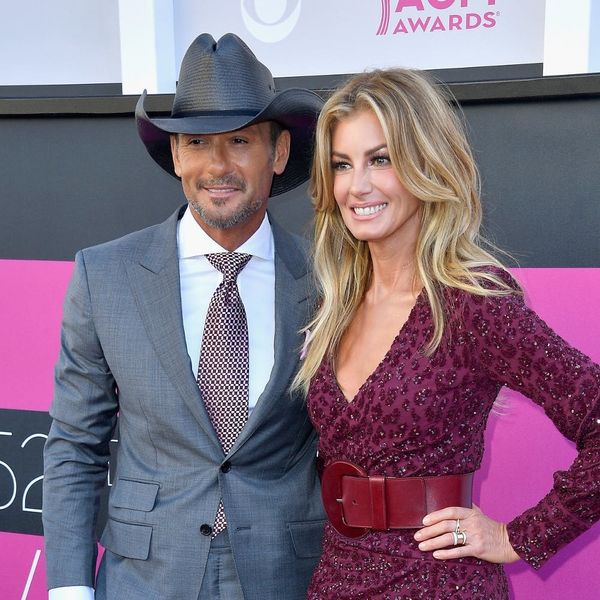 If you’re a country music fan, you’ll be well aware of the fact that last night, Faith Hill and Tim McGraw made us fall in love with love all over again. Specifically, their love of each other and our love of their music. A full 20 years after first taking the stage together at the Academy of Country Music Awards, the king and queen of the country scene stepped into the spotlight again to perform the first single from their upcoming joint album, and fans are FREAKING OUT!

Even before they took the stage, viewers were stunned by the beloved couple as they walked the red carpet and looked as gorgeous as ever. While Faith Hill wore a plum-colored gown with a subtle glittery leopard-print and thick burgundy belt, Tim McGraw matched his lady with a checkered tie, gray suit, and cowboy hat (natch!).

But as fab as their arrival was, when they took the stage, WOWZA!

When the pair walked out, we could see that McGraw had switched to a sleek black suit, bow-tie, and hat, while Hill glowed in a shimmering bronze dress that came to just below her knees.

Then, when the tune started up, the audience was immediately pulled into the duo’s performance of “Speak to a Girl.” The first song to be released from their still-unnamed album, Hill and McGraw were as on-point as ever as they absolutely blew the crowd away.

Finishing off their set with joyful jumps from Hill and a kiss and full-on embrace from McGraw that lifted Faith right off of her feet, it couldn’t have been a more perfect moment.

Has it really been 20 years since #TimMcGraw and #FaithHill performed their first duet? They've still got it. 💕 @ACMAwards

Oh the feels of this song by #TimMcGraw & #FaithHill
So freaking good!! #ACMAwards #ACMs

Take a listen to “Speak to a Girl” (a timely tune about respecting women) for yourself below.

Were you blown away by Faith Hill and Tim McGraw’s performance? Let us know @BritandCo!