Peter Kavinsky Is Great, But the Covey Sisters Are the Real Crushes in ‘To All The Boys I’ve Loved Before’ 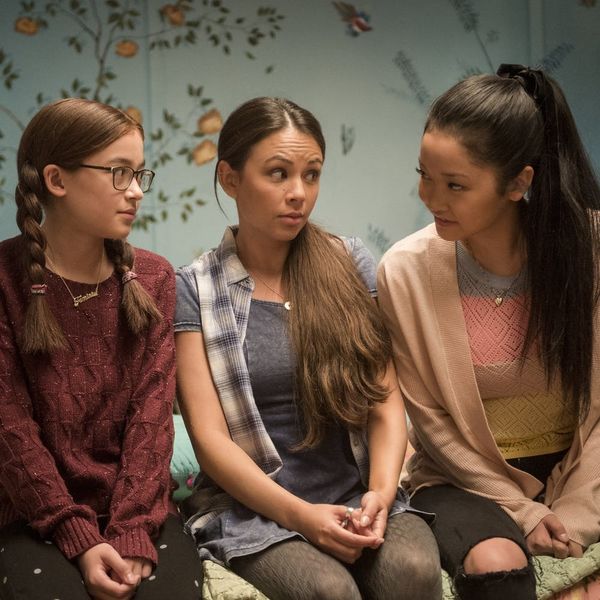 I think we can all agree that the Netflix sensation To All The Boys I’ve Loved Before has firmly cemented itself as a classic teen movie that will continue to get better the more we watch it. Needless to say, Peter Kavinsky (Noah Centineo) has captured our hearts with his swagger, his symphony of “whoa”s, and that back pocket spin. But truth be told, 16-year-old Lara Jean Song Covey (Lana Condor) and her band of sisters have become our #WCWs with their solidarity, healthy family dynamic, and emphases on self-love and self-confidence. That goes hand-in-hand with how proud they are about their Korean heritage and how it’s become such an integral part of their identities. That sense of confidence and deep pride emanates from their characters throughout the film and is manifested in everything they do.

Despite their high school and middle school settings and accompanying cliques, rumors, and Instagram posts, the Covey sisters are lacking in teenage angst or sisterly rivalry, quite comfortable in driving each other to school and spending the night watching reruns of The Golden Girls without lamenting about their — er, Lara Jean’s — lack of a social life.

“I love The Golden Girls and I love hanging out with you,” Lara Jean tells 11-year-old Kitty, who canceled her own plans so her sister wouldn’t be alone. But boyfriend or not, these sisters put themselves and each other first. They are more content with loving each other and themselves than finding love, or at least needing it for validation.

Before oldest sister Margot leaves for college in Scotland, she [SPOILER ALERT!] breaks up with her longtime boyfriend Josh, not wanting to be tied down to a relationship and unwavering in her decision. To see this new dynamic between Josh and Margot goes some way in dismantling the pattern that we’ve seen so many times in pop culture where the girl often gets left in the dust for greener pastures. Don’t get me wrong: My heart still hurts for Josh and I want the boy next door to have his own happy ending. But Margot’s decision to be selfish about her college experience is not cold or harsh; it’s a power move, and that’s not necessarily a bad thing.

And while Margot jets off for a new adventure, Kitty deliberately sends out Lara Jean’s love letters to all her former crushes, including Josh. She gives Lara Jean the push she needs to get out of her shell and act on her feelings, thereby jumpstarting the premise of the movie. Not only does Lara Jean start a fake relationship with Peter to throw off Josh so Margot doesn’t get upset, but she unequivocally shuts down all conversations with him, refusing to give a smidgen of thought to any lingering feelings she may have. It’s less of an adherence to an arbitrary girl code and more of a natural decision that her love for Margot trumps any adolescent feelings she’s had for Josh.

What the movie so powerfully captures here is Covey girls’ sense of camaraderie — the proverbial “sisters before misters”— that invites viewers to understand that this story at its core is a celebration of sisterhood. It’s a rom-com of sisterly love, and the extents the Coveys would go for one another, more than it is of romantic love with cute teen boys.

TATBILB doesn’t resort to gimmicky storylines of sibling rivalry or slut-shaming (Peter is quick to shut that down) to turn this into a sensational and caricature version of high school, nor does it perpetuate Lara Jean’s seemingly invisible persona to maintain the shy vs. popular girl dichotomy. In fact, she’s stronger and bolder than Genevieve and Peter — two of the most popular people in school — combined. Lara Jean might not be very experienced, but from the beginning, she’s sure of herself, comfortable in her own skin, and does not ever feel the need to conform to a high school status quo to make a place for herself. When Genevieve makes a snarky remark about her platform boots, Lara Jean is quick to remind her it’s vintage. As Peter says, she doesn’t let Gen steamroll over her.

Lara Jean is scared of getting hurt, but she makes Peter work for her trust because she knows her worth. She’s insecure about his feelings for her, but not about whether or not she’s good enough for him. As far as she’s concerned, they’re on equal footing; she makes that quite clear when she suggests that if he’s only dated one girl, he’s not quite the expert he thinks he is. Though the fake romance is his idea, the ball has been in her court since the beginning. She’s delineated her boundaries and decided when to give him a chance and express her true feelings to him. Both scenes of her strutting through the lacrosse field to talk to Peter — when she’s good and ready, mind you — with her back ramrod straight and her head held high are proof of how self-assured and in control she chooses to be; her popularity or lack thereof has no bearing on that.

Lara Jean’s character may have moments of peak embarrassment in this movie, but she carries herself with confidence and owns her actions, unapologetic about who she is. Much to our chagrin, this movie is fictional, but Lara Jean’s confidence is contagious and all-too-real. While there aren’t enough Peter Kavinskys in the world for all of us, To All The Boys I’ve Loved Before sets a wonderful standard of self-love and confidence that are not bound by social hierarchy. As much as we love falling in love, our love stories start with ourselves.