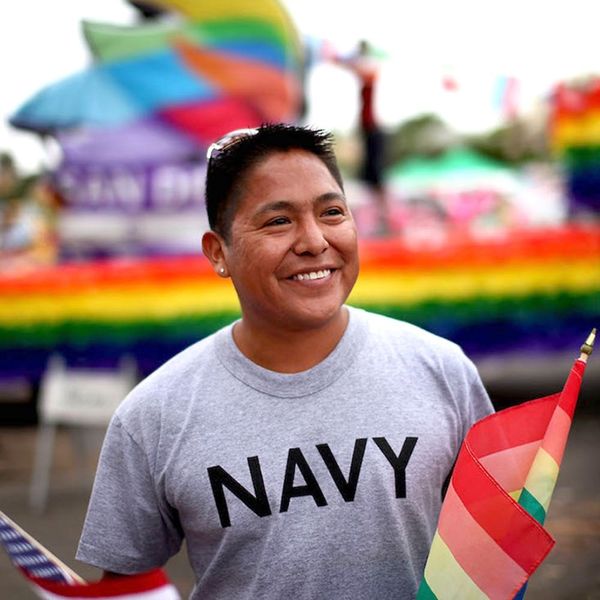 In a series of tweets this morning, President Trump announced, “transgender individuals in any capacity” will no longer be allowed to serve in the US military. Trump’s tweets go on to say the military must be focused on “decisive and overwhelming victory” and cannot accommodate the “tremendous medical cost and disruption that transgender in the military would entail.”

In the announcement, Trump claims to have consulted a series of military experts but does not clarify who those individuals are. Like with many of Trump’s tweets, the 140-character limit leaves us with a lot of unanswered questions.

After consultation with my Generals and military experts, please be advised that the United States Government will not accept or allow……

….Transgender individuals to serve in any capacity in the U.S. Military. Our military must be focused on decisive and overwhelming…..

….victory and cannot be burdened with the tremendous medical costs and disruption that transgender in the military would entail. Thank you

1. How much does transition-related treatment really cost the military? Spoiler: It’s hardly a “tremendous” amount. But before we dive in there, let’s start with a bit of background: Transgender service members have only been permitted to serve openly for about a year, thanks to changes made by President Obama. The former president also instituted a policy that would require the Pentagon to pay for medical treatment related to gender transition. That order is currently being fought by Republicans, primarily Representative Vicky Hartzler from Missouri. Hartzler is fighting for an amendment to a $700 billion appropriations bill that would end the government’s obligation to pay for such medical services.

Okay, let’s talk numbers. A report by RAND claims that somewhere between 1,320 to 6,630 trans individuals currently serve in the military. That same report also concluded that it would only increase military spending by 0.04 to 0.13 percent to provide transition-related treatment for those members of the military. But here’s something important to remember: Not all transgender individuals seek medical treatment. RAND estimates that only 0.1 percent of the total force would seek transition-related care that could disrupt their ability to deploy. Looking for some exact numbers? That translates to somewhere between 29 to 129 service members. In total, there are over two million members of the military currently on active duty or in the seven reserve components.

2. How will the military actually determine if military members are transgender? Here’s a crucial part of Trump’s new ban that he has yet to specify. Before last year, military medical policies still excluded transgender people from serving in the US armed forces. Members of the trans community were not included in the 2001 “Don’t Ask, Don’t Tell” policy, which allowed gay, lesbian, and bisexual service members to serve openly.

Prior to 2016, transgender individuals were required to either hide their transgender status or face being discharged if their true identity was found out. It’s likely that this will yet again be the case.

3. How does this align with Trump’s prior claim to support the LGBTQ+ community? TBH, it doesn’t really. Trump has been wishy-washy about his stance on LGBTQ+ rights throughout all of his presidency so far, starting by retracting protections issued by President Obama which allowed transgender students to use the bathroom they identified with most.

Trump has a history of embracing the group, only as it’s convenient to him. Throughout all of June, Trump made no mention of Gay Pride month, despite many members of the community asking him to address the major holiday. In a tweet last year Trump wrote, “Thank you to the LGBT community! I will fight for you while Hillary brings in more people that will threaten your freedoms and beliefs.”

Thank you to the LGBT community! I will fight for you while Hillary brings in more people that will threaten your freedoms and beliefs.

How this new military policy protects trans is advantageous to individuals’ freedoms and beliefs remains a mystery.