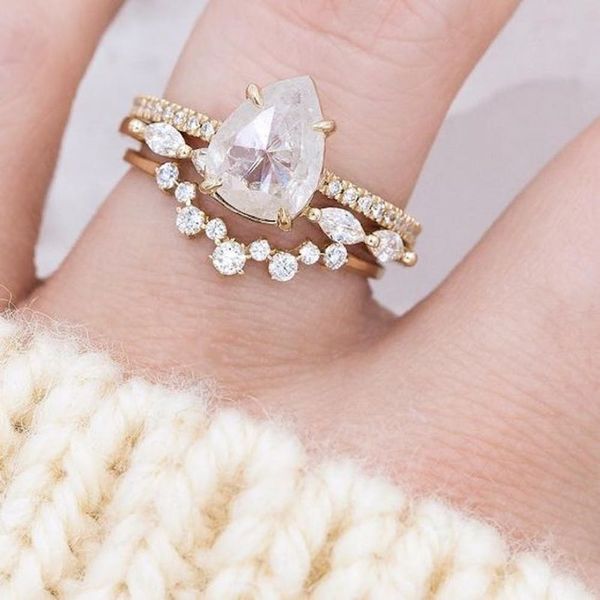 The times are definitely changing — and let's be real, so are weddings. But of the many nuptial trends we've seen take hold this year, there's one that literally sparkles. Brides are falling hard for creative engagement baubles more than ever before — and the examples are full-on dazzling. If you're looking for "the one" that's as special as you are, here are 33 unique engagement rings for the non-traditional bride. (Photo via Instagram)
An east-west (horizontal) setting gives the elegant emerald cut solitaire a modern twist.
Hallelujah! Even traditional diamonds can be worn diferently if you opt for trendy nesting rings featuring petite, diamond clusters. (Photo via Instagram)
Three diamond halos are always better than one. (Photo via Pinterest)
EidelPrecious Sapphire Engagement Ring ($4,000): For a bit more bling, add micro side stones.
This mixed diamond engagement band dazzles all on its own. Worn as a nesting band, it will surely turn heads. (Photo via The Lane via Grew & Co.)
As if the asymmetrical diamond wasn't cool-girl-approved on its own, up the ante with a colored stone nesting band. (Photo via Bario Neal)
Davie & Chiyo Aurora Ring ($973): Non-diamond center stones are all the rage RN. An opal with an added halo? Yes, please.
MinimalVS Gold Sapphire Ring ($2,700+): This sparkler gives "pretty in pink" a whole new meaning. Consider this option made for the romantic bride.
Peach-hued diamonds are warm, glittering, and — let's face it — stunning. (Photo via Pinterest)
This lavendar, asymmetrical diamond halo adds just the right amount of trendiness to the style. (Photo via Instagram)
Melanie Casey In the Sky with Diamonds Ring ($1980): This diamond cluster ring is both elegant and adorable. We'll take it.
Heidi Gibson The Rhapsody Ring ($2580): Mix-and-match diamonds were all the rage during the roaring '20s. Nearly a century later, and flapper- inspired fashion is still in.
Nesting bands are a minimalist-approved way to add dimension to classic looks. (Photo via Pinterest)
This double-banded beauty is perfect for boho brides. (Photo via ATTIC)
LoveInPinkNYC 14K Pink Gold Ring with Morganite ($725+): A rose gold setting, instead of go-to yellow gold or platinum, is an unexpected way to say "I do."
Raw-cut diamonds own that all-natural beauty vibe. (Photo via Anthropologie)
A hexagonal rock is undeniably edgy. (Photo via Pinterest)
Think beyond the band by combining enamel, pearl, and diamond accents into one epic piece. (Photo via My Wedding)
A horizontal, mix-and-matched engagement ring set is a surprising (and stylish) choice. (Photo via Pinterest)
AlyaPersonalized Engagement Ring ($480): This delicate, pearl center-stone find is #WINNING.
Ombre-hued, heirloom diamond clusters scream special — and are perfect for artsy couples. (Photo via Pinterest)
Hawkhouse Australian Opal Ring ($67): This multi-hued, opalescent work of art doesn't need any diamonds to wow. Swoon.
Ken & Dana Design Isabella Ring ($2450+): Dainty stones at the base of your setting are a gorg way to add subtle bling.
Alexis Russell Natural Grey Rose Cut Hexagon Diamond Ring ($4,495): A gray center stone gets a fancy upgrade courtesy of a geometric, diamond halo.
The pearl center stone and diamond border is an ideal complement to your fairy-tale wedding. (Photo via Pinterest)
Give your solitare new edge with a partial-halo nesting band. Or, go for the full-effect by completing the vintage-style halo. (Photo via Kayla's Five Things)
Blend tradition with the unexpected by saying "I do" in this intricate, edgy masterpiece. (Photo via Pinterest user Photo via @weddingchicks)
camilaestrella Rose Quartz Engagement Ring ($221+): Raw, rose quartz is the gemstone of love. Need we say more?
Engagement rings get a minimalist makeover with this dainty diamond and simple band combo. (Photo via Wild at Heart Bridal)
Mixing black diamonds with clear baguettes makes for a bridal look that's old-school glam. (Photo via Pinterest)
A red center-stone, like garnet or ruby, screams "passion." (Photo via Pinterest)
An emerald-cut diamond worn horizontally is sophisticated and simple for the modern bride who wants to get noticed. (Photo via The Vow)