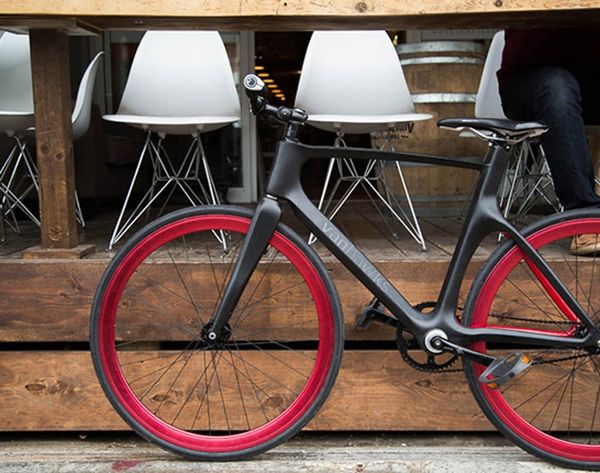 Just a little over a month ago we told you about GiBike. We were impressed with all its keyless, foldable, app-connected capabilities. And at the time we called it a smart bike… but now, we might have to rescind that statement. 30 some days later and we’ve discovered Valour — the newest, smartest and first carbon fiber smart bike, raising funds on Kickstarter.

Here’s what makes Valour smart: It connects to its accompanying app on iOS, Android or Pebble via Bluetooth to collect information on your routes, distances traveled, your speed and your time. If you’re thinking this sounds like little more than a bike fitness tracker, hold up. Valour can do so much more. For starters, it can give you directions without you having to connect your phone to your handlebars. Those handlebars are already tricked out with LEDs that’ll lead the way with turn-by-turn navigation. So when it’s time to take a right turn, bling goes the right handlebar. Same goes for making lefthand turns. For commuters who can’t be looking at their phones or listening to headphones while keeping their heads in the heavy-traffic game, this is massive.

And you know those creeping cars? Yup, when that pesky Prius silently rolls into your blind spot, Valour will alert you with a little vibration sent through the handlebar. Simply keep calm and carry on closer to the curb.

This is real deal pedal power, people: As you’re peddling around town, you’re supplying the energy for all the functionality. And once a convoy of these things hit the road, incredible things will start to happen. The bikes will automatically alert one another of potholes, bumpy roads, road kill and congestion by making use of its mesh network. It will then go on to suggest alternate routes.

The mesh network also acts as a sort of neighborhood watch. Did you read that, bike liberators of the word? If you steal a Valour, you will be found. And that will be awkward. When another Valour rider comes in range of the stolen bike, the owner of the lost cycle will get a notification, showing him or her where their frame has gone missing. So just don’t steal a Valour, because its owner will find you through GPS and take back his or her extremely clever ride.

If you’re a loungy beach cruiser or remote mountain biker, all the warnings might not make sense for you, but for those of us who bike in the city and deal with cars getting way too close for comfort and surprise potholes, the extra safety features are beyond nice to have and can probably save a few of us from a broken arm or two in our lifetimes.

The frame weighs in at 15 pounds, which may sound like a lot compared to the worlds lightest bike, a mere 6 pounds, but the carbon fiber frame is still light enough to carry in and out of buildings and up and down stairs on your way to public transportation. Speeds available are one or none, so fixie riders don’t have to give up any street cred.

If you want to claim yours, Vanhawks, the maker of the Valour, expects to start shipping in the fall. Just pledge $965. If you’re worried about repairs with so much tech pumping through your frame, Vanhawks says you should be able to patch up your tech-driven two-wheeled stallion anywhere that an analog two-wheeled stallion can be fixed.

Would you be willing to shell out for a smart bike? Let us know in the comments below!

Lex Monson
Alexis is the co-founder of Punkpost, the app that lets you send handwritten cards (yes, handwritten by a real human) in the amount of time it takes you to send a text message. The exclusive card collections are created by a community of artists and designers and hand letter pressed on high-quality cotton paper. Get the full experience by downloading the app from the iTunes Store.
Kickstarter
Health
Kickstarter
More From Health