Pick Up the Pace: Walking Faster Could Help You Live Longer 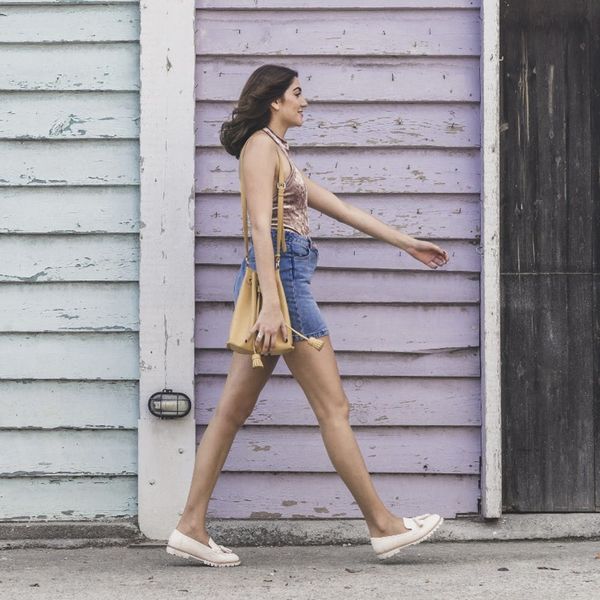 If you’re already doing your 10,000 steps a day — or working your way up to it — a new study has a fresh challenge for you. Research by scientists at the University of Sydney has found that people over 30 who walk at an average or fast pace are more likely to live longer than those who stroll slowly.

Published in the British Journal of Sports Medicine, the study looked at data from a total of 50,225 participants in England and Scotland, who were interviewed in 11 separate surveys that took place over a period of 14 years. They were asked to self-report how often and how fast they walked, with 4-5 mph considered a fast pace. In an interview with the University of Sydney, lead author Dr. Emmanuel Stamatakis explained, “It really depends on a walker’s fitness levels; an alternative indicator is to walk at a pace that makes you slightly out of breath or sweaty when sustained.” The interviewers also noted how much other physical activity participants took part in & whether it was light, moderate, or vigorous and factors like their BMI, sex, age, and existing medical conditions. Read on to discover what the research found.

1. An average pace was enough to make a difference. You don’t even have to get out of breath to have a positive impact. The study found that people who walked at an average pace had an all-cause mortality rate one-fifth less than those who walked slowly (meaning they were 20 percent less likely to die from any disease). Those who walked at a brisk or fast pace reduced their all-cause mortality rate by nearly a fourth. Average-pace walkers also benefited from a 24 percent reduction in their risk of death from cardiovascular disease compared to slow walkers, while those who walked fast were 21 percent less likely to die from cardiovascular disease than slow walkers. So as long as you’re not dawdling, you’re doing something for your health.

2. People over 60 saw the greatest risk reduction. The older the participant, the more pronounced the benefits of walking faster. Over-50s hitting an average pace had a 24 percent lower all-cause mortality rate than slow walkers in that age group; slow walkers saw their numbers improve by close to a third. The benefits were even clearer for the over-60s: Average-pace walkers from this group saw a 46 percent risk reduction for all-cause mortality, and it was reduced by 53 percent for fast walkers. The researchers suggested that this could be because walking fast gets harder the older you are, so hitting that speedy walking pace is the equivalent of doing moderate or vigorous activity for an older person. Similarly, people who reported a “light intensity” of physical activity every week but still hit a fast walking pace saw a steeper reduction in risk of all-cause mortality than people who were already doing moderate or vigorous exercise. (If you’re already doing a lot of intense physical activity every week, walking fast has less of an impact on your life expectancy.)

3. Fast walking was associated with some surprising traits. Of the people who self-reported a fast walking pace, about 28 percent were current smokers, as opposed to about 24 percent of the slow walkers. A fast pace was also associated with being male (nearly three in five), having a higher level of education, doing 150 minutes of moderate physical activity or 75 minutes of intense activity a week, and drinking alcohol five days or more a week. In contrast, those who reported a slower pace were more likely to have a long-standing illness (about two-thirds), be experiencing psychological distress, and walk fewer days a week on average.

4. Walking at a faster pace was good for both men and women. It turns out men and women of all fabulous sizes can benefit from stepping out a little quicker. Although women and people with a high BMI were more likely to be slower walkers, the results found that when they did walk at an average or fast pace they were just as likely to experience a reduced risk of all-cause mortality.

5. There was no notable impact on the risk of mortality from cancer. It wasn’t all good news: The study found that walking pace had no notable effect on cancer mortality rate. However, the researchers speculated that studying specific types could have shown a connection — particularly breast and colon cancer. Two studies presented at the American Society for Clinical Oncology in 2017 looked at the impact of exercise on breast and colon cancer survival rates. The first study found that women with breast cancer who undertook a program of moderate exercise for eight months had better odds of survival and less chance of the disease spreading compared to those who were not specifically encouraged to exercise. (Most of the women chose walking as their activity.) The second study found that bowel cancer patients who exercised for 150 minutes a week, ate a healthy diet, and watched their alcohol intake were more likely to survive and remain cancer-free for longer than those who did not. Dr. Stamatakis’s team suggested that it might not be pace that impacts your cancer mortality rate but how long you walk for.

6. This could change future health guidelines. We already knew walking was good for us, both mentally and physically, but this study gives us something else to think about when we’re trying to get our step count up. It’s still early days, and the researchers admitted that they couldn’t yet prove whether faster walkers live longer because they’re already fit. But Dr. Stamatakis believes that the findings should be included in future health guidelines so that they emphasize not just distance but speed. He also suggested to the University of Sydney that the findings are good news for people who are too busy to squeeze in those distance goals: “Especially in situations when walking more isn’t possible due to time pressures or a less walking-friendly environment, walking faster may be a good option to get the heart rate up — one that most people can easily incorporate into their lives.” Instead of marching on the spot in your kitchen at 11:59pm, you’ll be racing around the grocery store on your lunch break!

Are you a fast walker? Let us know if you’ll be speeding up @BritandCo.

Natasha Lavender
Natasha Lavender is a Londoner living in Chicago, and is fluent in British and American. She writes about pop culture, health, lifestyle, feminism, fashion, and interviews with interesting people, and has previously worked for Good Housekeeping magazine, Buzzfeed, and Hello Giggles. She loves podcasts, running, reading, dogs and cats equally, and peanut butter anything.
Healthy Living
Health
Healthy Living Study Workouts
More From Health