Holidays at the White House Get a Techy, Maker Makeover 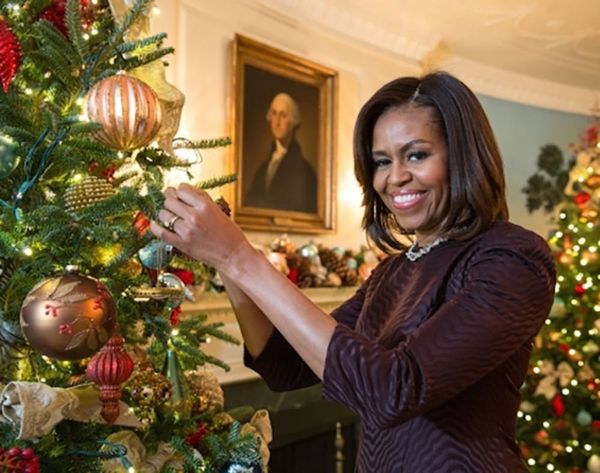 Christmas at the White House is just as stunning as you’d think it would be: 26 ornamented trees, a room full of cranberry themed decorations, a 300 pound gingerbread house, the whole shebang. But this year, in addition to all the classic holiday traditions, the most famous house in America is getting a tech makeover with a DIY twist and some help from the maker movement.

For the 2014 holidays, the White House will feature crowdsourced lighting patterns on President’s Park coded online by girls across the country. The Obama’s dogs, Sunny and Bo will receive matching robot versions of themselves — Sunny’s complete with infrared motion sensors that prompt her to turn in the direction of someone approaching. The President and First Lady have even released what they call their first-ever interactive White House holiday card.

Located in the Book Sellers Room, an interactive digital snowscape will capture visitors’ movements, showing them abstractly projected onto the wall as a flurry of snowflakes in a serene winter wonderland scene. The piece aims to connect new technology directly with the White House, while encouraging movement and play.

This isn’t the first time the White House has jumped on board the tech train with stops at Maker City and DIYville (#choochoo). Back in October they hosted a 3D printed ornament contest, boasting that the winners would be displayed in the East Wing. The five winning designs (which came from folks all around the country and were created right here in SF!) can now be found on trees in the house. And earlier this summer they hosted their first ever Maker Faire, which our very own Brit attended (and got to hang with President Obama and Bill Nye, NBD).

Scoring a ticket for a tour can take up to six months, so seeing all the decorating in person isn’t looking so likely, but you can take a virtual tour here thanks to Google Art Project.

Have you ever toured the White House during the holidays? What techy twists are you putting on decorating this year? Share with us below!