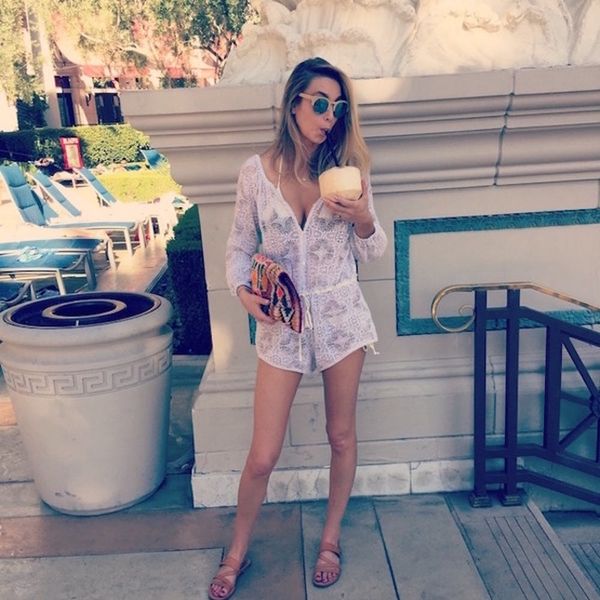 Former reality star-turned-designer Whitney Port is getting married any day now. We know she’s been engaged to producer fiancé Tim Rosenman two years this November, had her bridal shower already and even teased us on Instagram with a potential pic of her wedding dress (it was actually her sister’s). Before her nuptials though, Whitney is truly taking advantage of her bachelorette-hood with not one but TWO bachelorette parties — one to Vegas in August and the other to Cabo San Lucas, Mexico back in September. Needless to say both trips have look absolutely incredible and we’re missing out invites. They must have gotten lost in the mail, right?

Whitney spent part of the weekend lounging poolside at Caeser’s Palace where she and her friends stayed with a coconut, shade and an adorable white lace romper. Girl certainly knows how to relax.

What’s a bachelorette party without your #squad? She and her pals posed on the balcony of their hotel room.

Personalized embellished champagne bottles as favors for your bachelorette party attendees is such a brilliant idea. Not only does it cover the bubbly for the weekend, but it also makes for a great Instagram opportunity.

A Vegas bachelorette party just isn’t quite the same without embarrassing headgear for the bride. Here Whitney’s sporting a pink fuzzy headband that reads “Bride-to-be” on the heart-shaped ears.

And yes, The Hills alum went to the Britney show where she didn’t just get front row seats. She literally got onstage seats wheen Brit Brit pulled her up and made her a part of the act. #goals.

She and her pals then danced it up at Omnia Nightclub in Caeser’s Palace. All in all, an epic bachelorette weekend for the books… and that ought to suffice right? Wrong.

Whitney and her girls (including her sis Jade) jetted off to Cabo San Lucas for Whitney’s second more chilled out bachelorette party. Jade cleverly hashtagged this trip #WhitgetsdePORTed

Whitney and her pals stayed at The Cape Hotel and oh man, their food certainly looks mouth-watering.

Naturally, Whitney’s vacay luggage would be picture perfect. The folks over at Bow & Drape packed her a complimentary vacation bag complete with a custom Bando duffle.

Whitney’s sister snapped this pic of the absolutely stunning landscape. Seriously, where does the water and the sky begin?

And here’s Whitney appreciating the sunset — which we can only imagine was even more breath-taking in person. Yep, this double bachelorette party thing is definitely something we could get on board with.

What did you do for YOUR bachelorette party? Tell us in the comments below!

Kimberly Wang
Kimberly Wang writes about all things pop culture, tech, style, and beauty. She's a Bay Area transplant and has an MFA in Creative Writing from Columbia University. On a sunny New York day, you can find her hanging out with her mini schnauzer Isabelle Jellybean on a blanket in Central Park.
Celebrity Wedding
Wedding Planning and Decor
Celebrity Wedding Engagement
More From Wedding Planning and Decor