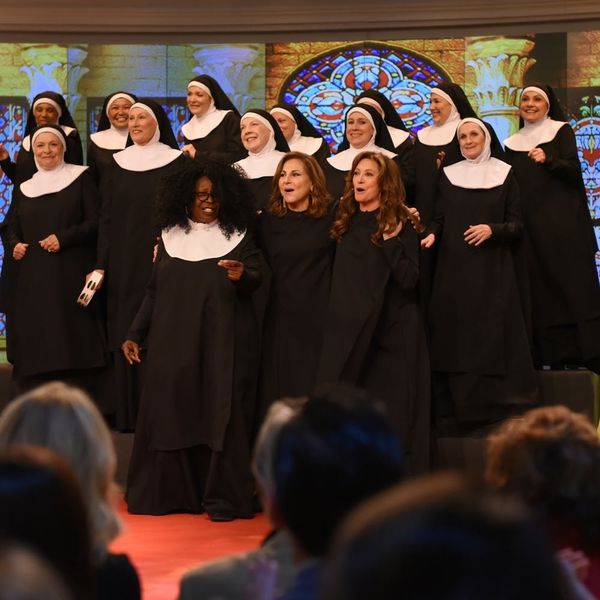 It’s been 25 years (!!) since Sister Act became a near-instant classic starring Whoopi Goldberg, Kathy Najimy, and Wendy Makkena. The musical comedy centered around a lounge singer who’s put into protective custody after she decides to rat out the mob. Only, this singer’s hideout is a convent filled with angel-voiced nuns. Since its box-office-smashing days back in 1992, the movie has spawned both a sequel (starring a then-unknown Lauryn Hill) and a Broadway show. To celebrate the film’s anniversary, the OG cast reunited on Goldberg’s daytime talk show, The View, where they treated fans to a special performance.

The stars, along with the musical’s writer, Marc Shaiman, also had a chance to sit down and reminisce about making the movie. During their chat, it was revealed that Goldberg really did sing all of Sister Mary Clarence’s songs, but that the movie wasn’t really meant for her — producers had planned for musical star Bette Midler to fill the habit.

“It was Bette Midler’s movie,” Goldberg said. “She couldn’t do it. She turned it down. They went through 100 million people and then got to me.”

Later in the episode, Dame Maggie Smith sent a heartfelt video message to her former castmates. In it, she recalled how they “laughed and laughed and laughed” on set and said she couldn’t believe it had been 25 years since they donned their habits.

Goldberg was in awe of Smith at the time. “I couldn’t believe she wanted to do the movie. I said, ‘You’re Maggie Smith. What are you doing here?’ She said, ‘Darling, I have to eat.’ But she also said, ‘I have to act. This is what I do. I want to be here. It seems like fun.’ When she came to see it, it was kind of extraordinary.”

The actresses admitted that they loved to sneak down to the blackjack tables at the casinos in Reno, Nevada (where they filmed the movie), in their costumes, much to the surprise of fellow casino-goers. “The habit was great,” Najimy said. “You could get in anywhere. You could eat anything. In one of these hotel rooms, we ordered wine and fries — as one does in a nun’s outfit.”

Before the reunion was done, they were all surprised by the movie’s mobster, Harvey Keitel, who recalled a little tidbit from their time on set that became one of the most iconic moments of the movie.

“There’s one thing in particular I’ve always admired about Whoopi in the film. There’s this moment where she’s angry at Vince, this character that I play, and Whoopi had wanted to say something to Vince that wasn’t allowed in a film like this… you know, she wanted to say… [f]-you,” he said. “So, she was upset. You know, she wanted to say it. They said you can’t. She said, ‘Okay.’ Cause the line was ‘Bless you!'” Once the moment came, however, Goldberg was able to say her line by changing the tone of “Bless you” to come across as more swear-y than you’d think.

Keitel said he loved that moment because it was an actress “making something work from her own talent.” He then gifted his former costar a jacket with her name stitched onto the lining, a reference to when his character gave Sister Mary Clarence a jacket with his wife’s name etched inside.

Do you love Sister Act? Tell us your favorite scene @BritandCo!