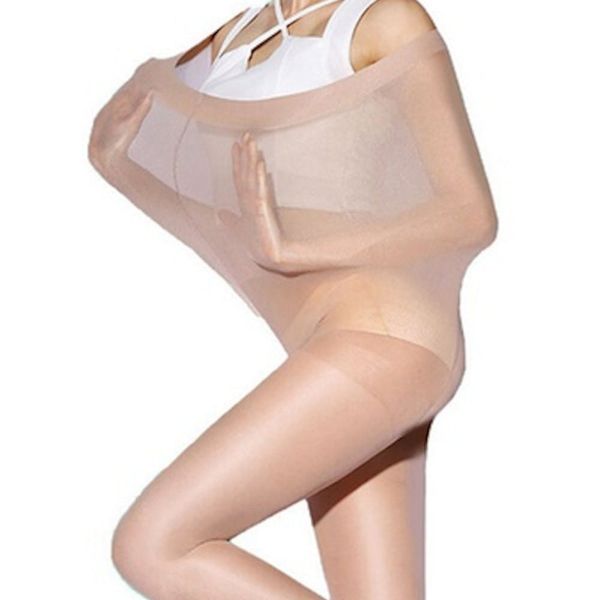 The fashion industry may be more inclusive than ever (did you SEE Ashley Graham’s smoking unretouched photoshoot for Vogue Italia?) but some companies are still missing the mark. Enter China-based brand Wish, which is selling plus-size tights with some seriously controversial images.

The stockings, which come in nude and black, are being advertised as “plus-size ultra elastic tights” and are meant to fit curvy women. Not only do the product photos not show a plus-size model wearing them however, they’re shown covering a model’s entire body.

In several brow-raising snaps, which have begun trending on Twitter, the tight-clad women can be seen actively doing their best to stretch the stockings as wide as they can, pulling them up well above their shoulders and in some images, covering half of their faces.

Shoppers were none too pleased with the images, with social media up in arms over the controversial shoot.

I’m so pissed off, how is this an actual ad for plus size tights?? pic.twitter.com/J8S10hJ2Yp

So, nobody actually thought this was an awful way to advertise these "plus size tights" during the meeting? Nobody? https://t.co/nHsDxSw7dy

The fact that a PR team, marketing team, photographer, and models thought this was okay is beyond frustrating. If you’ve ever wondered what it feels like to be indirectly called a whale, this is it. #wish #plussize https://t.co/GG53hO8fJZ

So THIS is all they could think of!!??? Heaven forbid they hire a plus sized model to wear them!!!! RT @TODAYshow: People aren't happy with how this website is advertising its plus-size tights https://t.co/6FuIzQ8zd7 pic.twitter.com/8qOgkekIDz

Yikes! While Metro reached out to Wish for comment a few days ago, the brand has not addressed the controversy and the tights are still up for sale.

Barbara Pavone
Barbara Pavone is a pop culture-obsessed writer based in beautiful (but ridiculously cold) Montreal, Canada. When she's not working, she's sipping on a Pimm's Cup and daydreaming about her celebrity hero, Saint West.
Controversy
Style News
Controversy Plus Size