8 Unique Yoga Hybrids to Help Step Up Your Zen 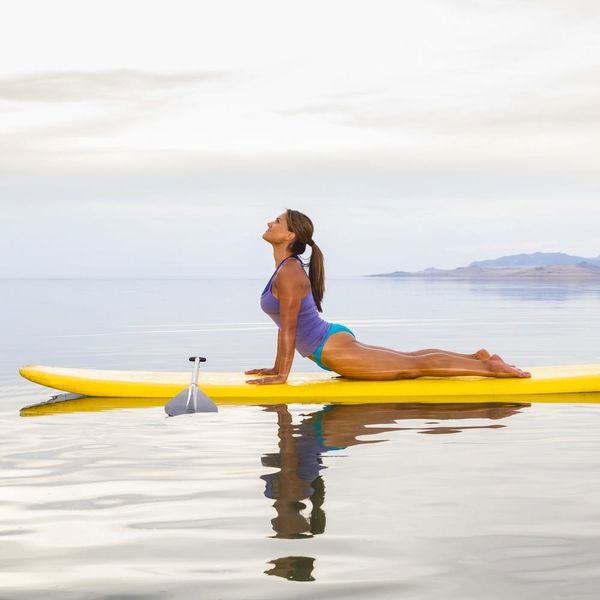 We’re living in a golden age of yoga. In the 1970s, yoga was a New Age practice adopted by a niche group of spiritually minded city folks influenced by centuries-old teachings of the East. Now, it’s as common a workout routine as running, swimming, or jumping rope — some grade schools even teach it as part of their PE programs. Of course, when anything becomes mainstream, creatives tend to do what they do best: Mix it up. Hybrid yoga sessions have been around for awhile, but newer hybrid classes blend traditional poses with trending sports and pop culture, yielding styles that range from playful to grueling. If you’re a die-hard yogi looking to breathe new life into your practice, scroll below for eight ways to step it up.

1. SUP Yoga: This is the type of yoga you probably have been (or will be) hearing about most. Taking a complex vinyasa on a paddle board is not easy, but it’s so rewarding. (Jump in the water after a grueling, sweaty class? Yes, please!) Although Aruba-based instructor Rachel Brathen says she didn’t invent the SUP-style, her Island Yoga studio definitely helped put it on the map. (Photo via Getty)

2. Hike Yoga: The best way to combat achy muscles is to stretch, which is why the idea of incorporating yoga into a hike is brilliant. Students trek a little, find a good spot, and go through a couple sequences. Plus, everyone knows working out is way better when you have a killer view. Hikyoga in Rochester, New York, leads outdoorsy excursions through the Finger Lakes area. (Photo via Hikyoga)

3. Hip-Hop Yoga: Drop it low while you hold it down at these classes where sultry R&B and rap beats set the pace. Y7 Studio in New York bills itself as the first, but the trend is catching on fast — prepare to get seriously addicted. (Photo via Y7 Studio)

4. Themed Yoga: A couple of Texas teachers broke the internet with a Harry Potter-themed yoga class they hosted around Halloween last year at Circle Brewing Co. in Austin. Muggles went crazy for the wands, invisibility cloaks, and poses like Slytherin Cobra and Downward Fluffy. Studios around the country have followed suit and expanded with other whimsical interpretations based on HP and other stories, like Fantastic Beasts and Where to Find Them. (Photo via Circle Brewing Co.)

5. Color Yoga: Plenty has been written about the power of color in our lives — blue exudes trust and calm, red elicits passion and excitement, yellow stands for optimism — so it makes sense that a mind-first workout like yoga would benefit from chromotherapy (using color to adjust body vibrations and promote harmony). Orlando’s YogArt outfits students with tinted glasses to encourage healing and to energize different parts of the mind, while ChromaYoga in London uses LED bulbs to sync the color with the practice. (Photo via ChromaYoga)

6. Beer Yoga: We’re not talking about grabbing a cold one with friends after class — these practices incorporate brews into the routines (triangle pose, drink; chair pose, drink; downward dog — um, that one is hard). The movement is said to have started at Burning Man (of course), but it became a thing in Germany. In Charlotte, NC, Work for Your Beer hosts meetups in breweries throughout the city. (Photo via Work for Your Beer)

7. Snow Yoga: It takes otherworldly mental strength to get through the long, brutal winters we’ve had lately. Might as well fully embrace it by taking your practice to the snow. Snogi center Soulshine Retreats hosts getaways in the French Alps and other mountainous locales year-round, and they also have classes you can follow online. (Photo via Getty)

8. Cat Yoga: Since we know being a proud cat lady is freakin’ awesome, it stands to reason that cat yoga would be as well. Some studios let you bring your own kitty, while others, like the free classes at P.A.W.S. Animal Adoption Center in Maine, bring shelter felines in hopes that you will fall in love and take one home. Similarly, Goat Yoga and Farm Yoga combine the therapeutic effects of cuddling furry animals to guarantee you will leave class smiling. (Photo via Brit + Co)

Have you tried any cool new yoga classes? Tell us about it @BritandCo!

Stephanie Granada
Stephanie Granada is a freelance writer and editor, who splits her time between Colorado, Miami, and NYC. When she's not locked down in research-mode, reporting a travel story on the road, or identifying areas to bolster the Hispanic community, you'll find her playing outside, working out, or hiding out with a book. Happiness to her is hiking up a mountain, swimming in a beach of her native Colombia, powering through a hellish boxing class, or getting lost in a story with a glass of something delicious — preferably whiskey — in-hand.
Fitness
Health
Fitness Halloween Workouts Yoga
More From Health