Find the Perfect Type of Yoga for Your Skill Level 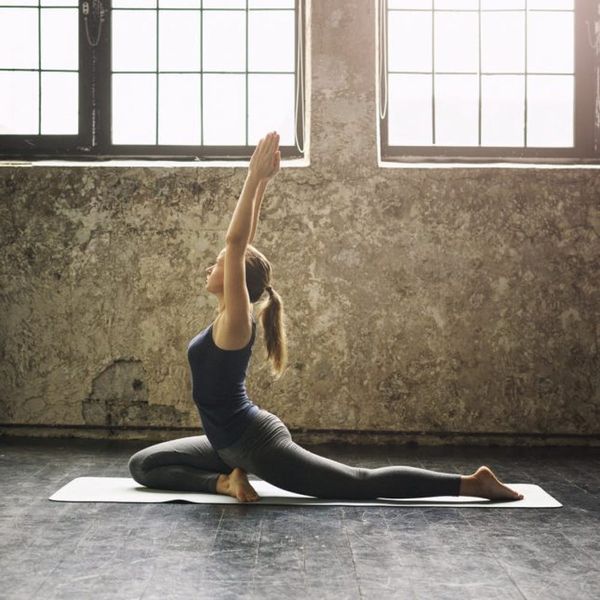 We’re all well aware of the incredible benefits of yoga. From strengthening muscles to improving mental health, this low-impact, high-reward workout has become super popular in the US over the last 10 years. Some brides have even replaced boozy bachelorette parties with yoga retreats. But for beginners looking to get their om on, picking the right type of yoga for your personality or even just knowing what the different yoga classes entail can be super overwhelming. Whether you’re looking at a sea of YouTube yoga workouts or considering a local studio, knowing what you’re signing up for is half the battle.

To help us all out before our next flow, Lauren Imparato, founder of I.AM.YOU., a lifestyle company and yoga studio in Manhattan and the author of RETOX: Healthy Solutions for Real Life, breaks down five different types of yoga in order from least to most difficult (physically that is, as yoga has a HUGE mental component). All you have to do now is hit the yoga mat and start reaping the rewards. We know you’re already wearing yoga pants.

“Hatha is somewhere in between Iyengar and Ashtanga Yoga,” says Imparato. “Hatha Yoga is a slow flow without breath focus or count, and has an in-between amount of poses, compared to Iyengar and Ashtanga. There’s plenty of attention paid to the energetic qualities of each pose.” Hatha is one of the most common types of yoga taught in America and typically always covers basic yoga poses. It’s best for people that want to chill, relax, and just stretch it out with their breath.

“Iyengar yoga is the opposite of ‘flow’ yoga, and thus often great for beginners. You focus on three to 10 poses a class, and pay extra close attention to details and perfecting alignment. Props are often used, such as straps, blocks, chairs, and the wall,” says Imparato. Do note that these classes typically require some serious nailing of poses before moving onto different moves. She adds, “Iyengar is best for people that want to hone in on the alignment of each pose and don’t get stir crazy easily. It’s hard, but in a very micro-focused way.”

We all have that one friend who just looooves hot yoga, also known as Bikram Yoga. Imparato explains that with Bikram, “A set amount of poses are done in order twice through in a heated room. People often start in Bikram because the heated room makes you feel like you are exerting yourself through sweat and because it’s easy to follow.” Bikram is best for people that like to leave sweaty and want to feel flexible. We’re talking majorly sweaty, as the rooms are typically 90 to 110 degrees, with a humidity of 40 percent. Imparato cautions that you should beware of injuries during Bikram classes, explaining that “the heat can make you think you’re more flexible than you are,” since it increases blood flow to your ligaments and tendons. (Photo via Hot8Yoga)

“Ashtanga is the original vinyasa, or flow, yoga. The breath count is called out by the teacher, as is every movement,” says Imparato. Typically for Ashtanga classes, you’ll be expected to know a good amount of poses and moves that can be recited without much instruction from the teacher, so it’s a good idea to have a few classes under your belt before moving to this level. Ashtanga is great if you really want a workout, inside and out. Imparato says, “It’s cardio throughout the entire sequence, even during the stretching poses. Expect to get your heart rate up.” Focusing on syncing your breath with your movements and postures will leave you feeling super calm by the end of class.

Many yoga teachers think the US yoga scene is too focused on the concept of flow in yoga. Just think about all of those high-intensity power flow classes offered. That might be because vinyasa yoga, or flow, isn’t actually a type of yoga, according to Imparato. Instead, “Vinyasa means the connection between breath and movement. Meaning, like in Ashtanga, every inhale or exhale corresponds with a specific body movement,” explains Imparato. Vinyasa is an amazing workout, but the power yoga varieties can flow pretty quickly, so anyone but super advanced yogis won’t get the benefit of nailing each pose correctly. These are also the classes most likely to play some jams during your session. Every vinyasa yoga class is different, so try out a few to find your fave.

Are you a yogi? Tag us in your yoga pics on Insta @BritandCo!

(Photos via Hot8Yoga and Getty)

Kelsey Nelson
Kelsey Nelson is a born-and-raised Ohioan living life in South Carolina. She thrives at binge watching Netflix, contemplating what to order at the bar and running any trail or road she can get her feet on. In addition to being a Brit + Co contributor, she writes about southern pleasantries, DIY mishaps and more at North Living South. If she isn’t writing or running, she’s off adventuring with her husband Brad and their Lab/Dachshund mix, Gordy.
Fitness
Health
Fitness Workouts Yoga
More From Health