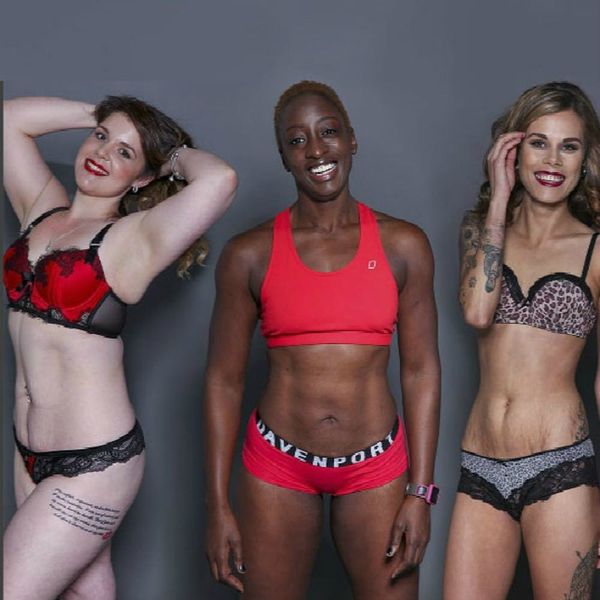 There’s been some big strides in the way of body positivity as of late. Case in point? Though it’s catching some serious heat for failing to include its new plus-size clothing in stores, H&M has finally added larger sizing to its website after this woman wrote the company a letter, and has also tapped plus-size model Ashley Graham as the face of its fall collection. Women are also speaking out on behalf of those being shamed for their size, like Christine Blackmon did after model Dani Mathers publicly shamed a woman that was changing at her gym.

Now, Australian photographer Amy D. Herrmann has created the Underneath We Are Women campaign, which sees 100 women of all shapes and sizes stripping down to their bras and panties (or even less) in an effort to show the world “the diversity of women’s bodies and the stories that shaped them rather than succumbing to the fictitious default stories that have long been associated with various body types.”

Sort of like a Humans of New York for the female form, the resulting images will be bound in a glossy coffee table book (available for pre-order with your pledge of monetary support, the proceeds of which will go toward production costs), and showcase nearly every type of body, from large to small, disabled to athletic, young to old and even modelesque in varying states of undress, along with the stories behind them. Discussing their illnesses, scars and body image struggles, these ladies are here to teach us all *never* to judge a book by its cover.

As if that wasn’t inspiring enough, there’s also merch up for grabs (think tees, tanks and jewelry) as a constant reminder to keep with you always: and the goods are actually cute.

Find out more about how you can get involved with the project or make a purchase here!

Are you inspired by Amy’s campaign? Sound off to us over @BritandCo!

(h/t Hello Giggles, photos via Underneath We Are Women)

Nicole Briese
Nicole is the weekend editor for Brit + Co who loves bringing you all the latest buzz. When she's not busy typing away into the wee hours, you can usually find her canoodling with her fur babies, rooting around in a bookstore, or rocking out at a concert of some sort (Guns N' Roses forever!). Check out all her latest musings and past work at nicolebjean.com.
Body Positive
Celebrity News
Body Positive Crowd Funding lingerie
More From Celebrity News