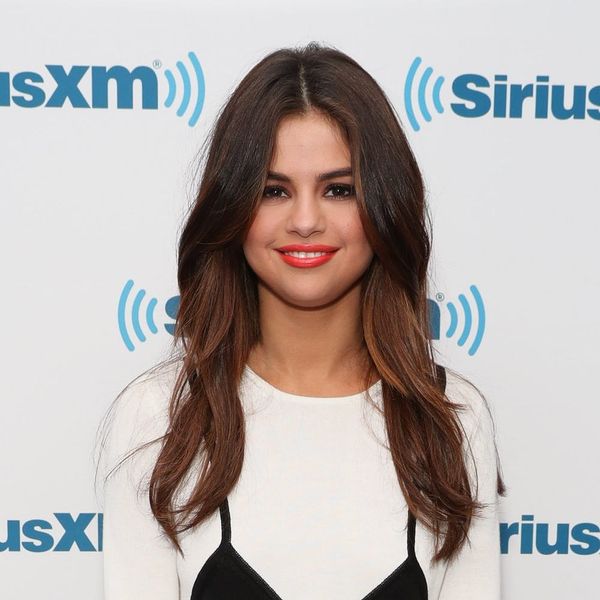 Named for the late Selena Quintanilla and with her own golden set of pipes, Selena Gomez was destined to be a star, a fact she made clear after she burst onto the scene for her first red carpet back in 2007. Within the year, she had undergone a complete style transformation, ditching the vest and jeans she wore to the premiere of Surf’s Up for couture. In honor of the singer’s 25th birthday, we’re taking a peek at some of her best red carpet moments to date: Scroll through to check them out.
Gone Glam: Replacing her casual duds with a pretty Grecian Marchesa gown for the 2008 ALMA Awards, a style queen was instantly born. (Photo via Frazer Harrison/Getty)
In Style for InStyle: Gomez turned heads at InStyle’s Golden Globes after-party in 2011, for which she chose a red orange Catherine Deane dress with chain link straps, a flower-shaped Arunashi ring, and a Swarovski clutch. (Photo via Kevork Djansezian/Getty)
Golden Goddess: The then 18-year-old was as shiny as the golden awards being given out at the 2011 Grammys, thanks to her slinky J. Mendel dress, Lorraine Schwartz jewels, Brian Atwood heels, and a Judith Leiber clutch. (Photo via Jason Merritt/Getty)
Lovely in Lilac: Gomez chose Marchesa again, this time with a sheer beaded and frilly twist, to walk the carpet for the premiere of her 2012 film, Spring Breakers, alongside stars Vanessa Hudgens, James Franco, and Ashley Benson. (Photo via Albert E. Rodriguez/Getty)
White Hot: The actress suddenly looked all grown up at the Hollywood Stands Up to Cancer event back in 2014 while clad in a BCBG Max Azria jumpsuit with pretty pockets, a sideswept ‘do, and Melinda Maria earrings. (Photo via Michael Buckner/Getty)
Taking the Plunge: The “Fetish” singer stepped things up a notch for Vanity Fair’s 2014 Oscars party, daring to rock a plunging chest cutout on the front of her golden Emilio Pucci halter dress. (Photo via Pascal le Segretain/Getty)
Welcome to the Dark Side: As Gomez experimented with her look, we saw a much darker side of the songstress, who showed up to the 2014 American Music Awards in an all black, floor-length Giorgio Armani Prive dress, red lips, and Neil Lane accessories. (Photo via Jason Merritt/Getty)
Muy Caliente: She didn’t stay away from color for very long, picking a bold red hue for her flared Dior frock while attending the premiere of Rudderless that same year. (Photo via Alberto E. Rodriguez)
China-Inspired: In one of the most on-theme looks of the evening, Gomez stunned with this white Vera Wang number, which included a breathtaking train and floral headpiece at the Met Gala’s 2015 China: Through the Looking Glass exhibit. (Photo via Larry Busacca/Getty)
Outside the Box: Gomez proved she wasn’t afraid to experiment with her style at the 2015 InStyle Awards, where she showed up in a fringed, mesh Louis Vuitton top and skirt combo. (Photo via Jason Merritt/Getty)
Naughty and Nice: One part prim, one part badass, the 25-year-old’s collared, sheer, red latex Valentino dress at the Glamour Women of the Year awards reminded us that a little fashion risk can pay off hugely. (Photo via Dimitrios Kambouris/Getty)
Badass Babe: The chanteuse showed off some leg with a super high slit in her leather Louis Vuitton Victoria’s Secret fashion show gown. (Photo via Jamie McCarthy/Getty)
Metal Works: Gomez wowed once more in Louis Vuitton at last year’s Vanity Fair Oscars bash with this metallic sequined column gown. Photo via Pascal le Segretain/Getty)
Cutout Queen: The Weeknd's GF took the cutout trend to new heights in the bright orange Mugler jumpsuit she stepped out in for the iHeartRadio awards. (Photo via Frazer Harrison/Getty)
Sweet and Feminine: The Coach ambassador not only donned her brand for this year’s Met Gala, but she seemed to be embracing a much softer look for the affair, with a gown featuring blush hues and floral prints. Perhaps it was the glow of new love? (Photo via Neilson Barnard/Getty)

What’s your favorite look of Selena’s? Tell us over @BritandCo.

What’s your favorite look of Selena’s? Tell us over @BritandCo.

Nicole Briese
Nicole is the weekend editor for Brit + Co who loves bringing you all the latest buzz. When she's not busy typing away into the wee hours, you can usually find her canoodling with her fur babies, rooting around in a bookstore, or rocking out at a concert of some sort (Guns N' Roses forever!). Check out all her latest musings and past work at nicolebjean.com.
Red Carpet
Celeb Style
Red Carpet