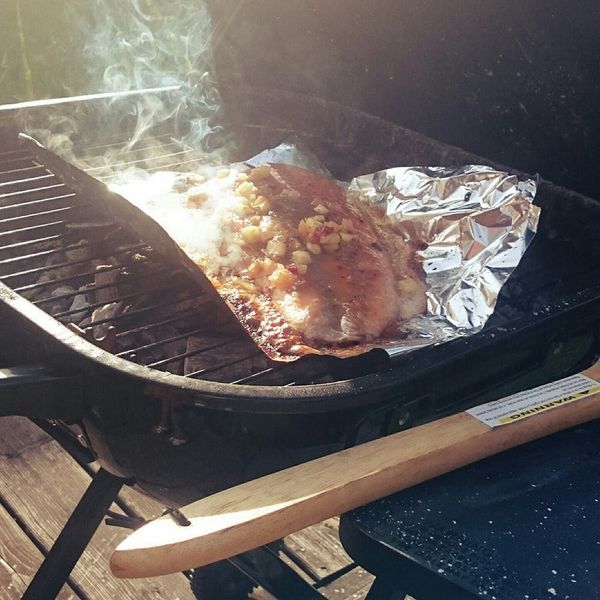 Some people may think cooking in foil is cheating — in Texas, for instance, it’s called the “Texas crutch.” Haters are gonna hate, but we got the straight dish directly from three chefs who are here to prove foil packs are a legitimate way to put meals on the table. Whether you’re steaming fish or charring potatoes, a sheet of aluminum foil can be your best friend over an open flame or inside your oven. Plus, the best part’s the cleanup: Simply toss that foil afterwards. Works for us!

“For my Hamptons style foil packet recipe, I would pack one whole striped bass from Stuart’s Seafood Market in Amagansett, NY (they have the freshest local fish!) with the juice of a small lemon, two tabs of butter, capers, a dash of salt, teaspoon of pepper, a bunch of parsley, a shot of sake, and 1/2 tablespoon of ginger. Toss it all together, wrap it up, and cook over hot coals for roughly eight to nine minutes per side. Accompany that with fresh corn, veggies, and herbs from Balsam Farms and cheese from Mecox Bay Dairy, and you have the ultimate East End feast.” — Chef Ian Lichtenstein Lowell of The Maidstone

“Growing up in the Midwest, ‘tin taters’ were in everyone’s campfire repertoire. They are quick and easy to make ahead of time, and they don’t take up much room. We even served them as a side dish in the first restaurant I worked in. The simple recipe goes as follows: One russet potato per person (baked and cooled), one slice bacon (small dice), one shallot (small dice), salt and pepper, and one tablespoon butter. Dice the potatoes into large chunks (or cut into thick wedges), and place them onto a sheet of aluminum foil, then sprinkle the bacon and shallots evenly on top. Season with salt and pepper, and place the butter in the center. Tightly wrap into an envelope by folding the corners in, and place over hot coals for 20 to 30 minutes.” — Chef Luke Venner of Elm

“One of my favorites is snapper in a banana leaf, and it’s a complete meal in a packet. I’m Hawaiian, and this method of cooking is used in my culture a lot — especially when we have cookouts on the beach. To make it, all you need is one sheet of foil, a Ti or banana leaf, eight-ounce portions of Opakapaka (red snapper), sliced Lap Cheong or Chinese sausage, and the following sliced veggies: shiitake mushrooms, Chinese sweet peas, greens onions, purple sweet potatoes, carrots, and onions. For the sauce, whisk together one tablespoon soy sauce, one tablespoon oyster sauce, one teaspoon Mirin, and one teaspoon sugar. Place the piece of foil on a cutting board and the banana leaf on top, then the fish, vegetables, and sausage (in that order). Wrap contents tightly so steam cannot escape from the packet, and place in a 350 degree oven or on a barbecue grill for 12 to 15 minutes (or until the fish turns opaque and starts to flake nicely). Then open the foil packet carefully, and pour the sauce over the fish before serving.” — Chef Kimo Akana of The Grand Nashville