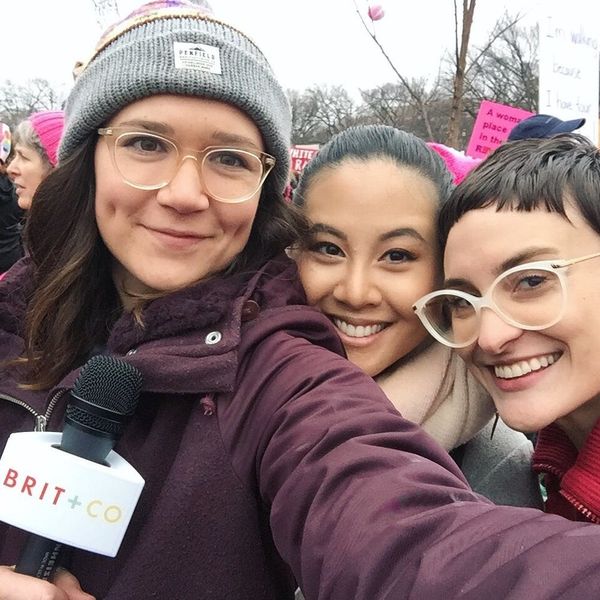 It’s hard to really explain to people what a crowd of half a million looks like. Yet, that’s now many people are marching in support of women’s rights today in Washington DC.

To give some perspective, 500,000 people is the population of Toledo, Ohio — not exactly a small representation. So it has been SO moving to see that number of women (and nonbinary people, and men, and children) crammed into a roughly one-mile radius in our nation’s capital today.

As a company that supports women, Brit + Co is proud to be among the crew of marchers. And as a Brit + Co editor who has spoken with dozens of strangers since people started filling the area surrounding Independence Ave. SW and 3rd Street before 9:00 this morning, I can tell you that I was NOT prepared for what I saw. And I learned a few things I wasn’t expecting, too.

1. Now is a time to build bridges. You’d think that a march filled with half a million people who were generally dissatisfied with our country’s new political direction would have an angry energy. The truth couldn’t be more different. I overheard one woman at the march telling a friend about her dad, whose prejudicial views she strongly disapproved of and disagreed with. “But we have to learn to find where we agree and come together,” she concluded. Literally five minutes later, I heard another conversation with the same driving message from someone else. It can be hard for me to find acceptance with people whose values I find not only different but totally wrong; overhearing women talking about building the world they want WITH the people they disagree with reminded me the value in patience and bridge-building.

2. A march this big is really about the people, and not the media circus. As a media representative (but also, let’s face it, a woman who’s down with the cause) I know there’s media THERE today. But boy, with so many protesters in attendance, it’s sure hard to spot them. We had one protestor say, “I’m 74 years old and I’ve protested a lot. This one feels different. Where are the cameras?” Surely the cameras are there, but this event isn’t for them.

3. In a dense crowd that’s half a million strong, just forget about getting cell reception. Seriously. It ain’t gonna happen.

5. We’re in this together. I don’t think every single woman marching in Washington, or in any of the sister marches around the world, holds the exact same political views. That’s kind of beside the point. This march, and this new political chapter, is about holding each other up and keeping each other safe. We are the future, and we’re building it together.

Are you marching? Tell us @britandco!