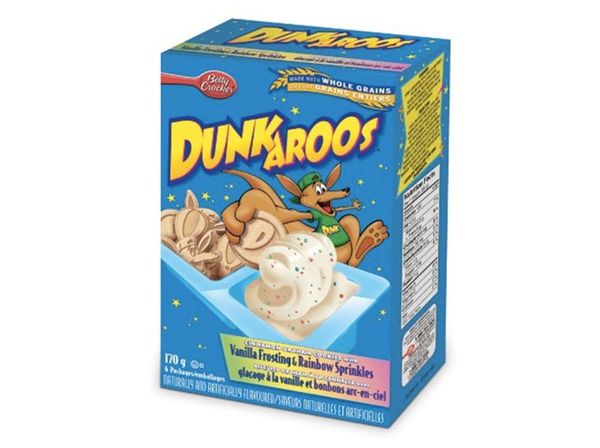 When we think back on the golden era that is the ’90s there are a lot of things we miss: the beauty products, the fashion and, of course, the food. We’re not talking about your mom’s home cooked dinners (although we could totally go for one of those right about now), we mean those snacks and lunchtime goodies with catchy commercials that popped up in between episodes of Clarissa Explains It All or Hey Arnold. You know, the ones you’d beg your mom to buy when you accompanied her to the grocery store. If you’re up for a stroll down memory lane, scroll on down to reminisce with us about the best junk foods of yore.

1. Dunkaroos: The little frosting covered cookie was pretty much the king of lunchtime. Classmates would make some seriously tempting trades to get thier hands on one of these little packs.

2. Gushers: These super sweet treats were the crème de la crème of fruit snacks. You can bet we savored every last one of these little gems.

3. Capri Sun: Pacific Cooler was the best. Every other flavor was just a disappointment. (Photo via WILX)

4. Pizza Lunchables: When your mom packed you one of those ham, cheese and cracker Lunchables it was a good day. When she packed you the pizza lunchable it was close to a miracle.

5. Crispy M&Ms: We mourned the loss of these sweet treats for a while, but apparently M&Ms heard our cries and revived the crispy chocolates.

6. French Toast Crunch: Forget the real thing, we were all about this cereal version of the beloved breakfast food. Like crispy M&Ms it was sadly discontinued in 2006 but has since risen up from the snack food graveyard. (Photo via General Mills)

7. Trix Yogurt: Go-Gurt was cool, but Trix yogurt reigned supreme. The flavors were delicious, but the best thing about them was definitely the different colors you could swirl together.

8. 3D Doritos: Because one dimensional Doritos just weren’t enough. These were basically like Bugles on steroids. (Photo via Elite Daily)

9. Handi-Snacks: For those times during recess when you wanted to feel super classy by snacking on cheese and crackers. We can all just pretend to believe it’s real cheese. (Photo via Wikipedia)

10. Kool-Aid Bursts: Let’s be honest, after a long day at school all you really wanted to do was come home, put on some cartoons and chug one of these guys.

What ’90s food was your favorite growing up? Share with us in the comments below.

(Feature Photo via Children of the Nineties)

Cortney Clift
Cortney is the senior writer and special projects editor at Brit + Co. She typically covers topics related to women's issues, politics, and lifestyle. When she's not buried behind her computer you'll find her exploring New York City or planning her next big adventure.
90s
Recipes
90s Nostalgia
The Conversation